Khartoum: Sudanese security forces have arrested 17 officers and are pursuing others who plotted a failed coup, a member of the ruling military council said, in the latest upheaval to strike the North African nation since its long-time dictator was ousted in April.

The alleged coup attempt came at a crucial time, just before the council was set to sign a power-sharing deal with Sudan's main opposition group, Lt. Gen. Gamal Omar said in a statement on state-run Sudan TV.

Those detained include 13 senior members of the army and national security services, he said. 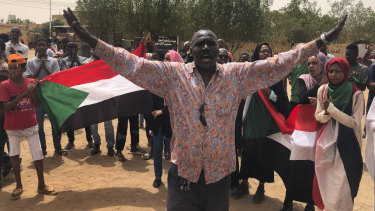 A Sudanese protester shouts slogans during a demonstration against the military council, in Khartoum, Sudan.Credit:AP

Omar did not present any evidence. The military council has ruled Africa's third-largest country since mass demonstrations sparked by an economic crisis spurred it to oust President Omar al-Bashir.

A firebrand opposition movement has kept up its protests, despite a crackdown that's claimed more than 100 lives, accusing the council of trying to block a genuine transition to democracy.

Under the yet-to-be-signed deal agreed last week, military and civilian representatives would share power on a sovereign council for just over three years before elections.

Sudan has been in political deadlock since the overthrow of autocratic President Omar al-Bashir in April.

On Sunday, Gen. Abdel-Fattah Burhan, Sudan's top general, said the military council that assumed power after al-Bashir's overthrow would be dissolved with the implementation of the power-sharing deal.

The deal was meant to end the impasse between the military council and the protest movement since security forces razed a massive pro-democracy sit-in in Khartoum early last month, killing more than 100 people, according to protest organizers.

In the ensuing weeks, protesters stayed in the streets, demanding that the generals hand power to civilian leadership.

The deal was reached after tens of thousands of people flooded the streets of Sudan's main cities on June 30 in the biggest demonstrations since the sit-in camp was razed. At least 11 people were killed in clashes with security forces, according to protest organizers.

The power-sharing arrangement is to include a joint sovereign council of five civilians representing the protest movement and five military members.

An 11th seat is to go to a civilian chosen by both sides. The protesters will select a Cabinet of technocrats, and a legislative council is to be formed after three months.

The two sides also agreed on an independent Sudanese investigation into the deadly crackdown, but the details have yet to be worked out.