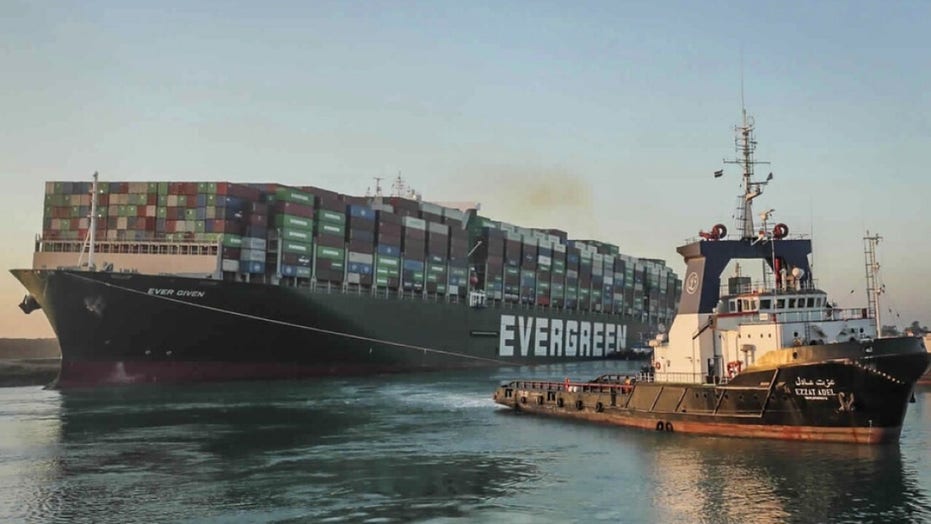 Fox Business’ Maria Bartiromo reports on the MV Ever Given that hit the bottom of the Suez Canal and has been stuck since Tuesday.

A celebratory video shows the cheers and happiness of a salvage team that helped free a colossal container ship stuck for nearly a week in the Suez Canal.

“Mashhour is No. 1!” yelled the Egyptian crewmembers of the dredging ship Mashhour, according to a tweet featuring the footage.

Helped by the tides, a flotilla of tugboats wrenched the bulbous bow of the skyscraper-sized Ever Given from the canal’s sandy bank, where it had been firmly lodged since March 23.

Following days of futility, the rescue ended a crisis that had clogged one of the world’s most vital waterways and halted billions of dollars a day in maritime commerce. The international drama captivated the world, drawing scrutiny and social media ridicule.

The giant vessel headed toward the Great Bitter Lake, a wide stretch of water halfway between the north and south ends of the canal, where it will be inspected, said Evergreen Marine Corp., a Taiwan-based shipping company that operates the ship.

More than 40 vessels that were anchored at the Great Bitter Lake waiting for the Ever Given to be freed have resumed their southbound journey through the waterway, according to canal services firm Leth Agencies.

Some 30 plus southbound ships anchored off the Mediterranean city of Port Said are expected to enter the canal, it added.

Buffeted by a sandstorm, the Ever Given had crashed into a bank in a single-lane stretch of the canal about 3.7 miles north of the southern entrance, near the city of Suez. That created a massive traffic jam that held up $9 billion a day in global trade and strained supply chains already burdened by the coronavirus pandemic.

At least 367 vessels, carrying everything from crude oil to cattle, are backed up as they wait to traverse the canal. Dozens of others have taken the long, alternate route around the Cape of Good Hope at Africa’s southern tip — a 3,100-mile detour that costs ships hundreds of thousands of dollars in fuel and lengthens a ship journey.

Egypt, which considers the canal a source of national pride and crucial revenue, has lost over $95 million in tolls, according to the data firm Refinitiv.

President Abdel Fattah el-Sissi, who for days was silent about the crisis, praised Monday’s events.