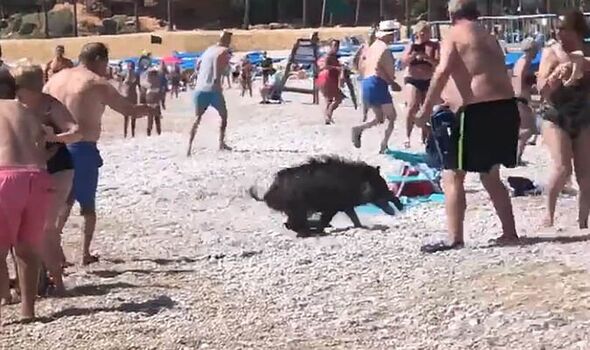 Footage of the drama showed tourists screaming and taking cover as the boar ran over their towels and along the sand, where moments earlier they had been tanning themselves. Medics who treated the unnamed woman – the only person who was injured – said her “minor” leg injury was cleaned as a precaution. She is believed to have been told to take antibiotics to prevent infection. Her nationality was unknown last night.

Emergency responders were alerted just after 11am yesterday to the shock at El Albir beach, just north of Benidorm.

The boar had been spotted in the water by boat crews who alerted lifeguards on the beach as it began to head for land after they made an unsuccessful attempt to catch it.

It is believed to have come from the nearby Serra Gelada Natural Park, but it is not known how it ended up in the sea.

Lifeguards managed to chase the boar away from the beach and crowded seafront bars and cafes before it caused any more panic.

The drama occurred just days after it emerged the nearby holiday resort of Denia is set to use archers to keep tourists safe from wild boars roaming the town’s streets at night.

The beasts are increasingly venturing into towns and cities to forage for food, with the numbers growing during the pandemic.

Several incidents have been reported across Spain this year.

Colombian pop star Shakira revealed last September that she was “attacked” by two wild boars while at a park in Barcelona.