Teen reels in 135-kilogram tuna in waters off Mornington Peninsula

A Melbourne teen has broken a national record after battling for four hours to reel in a decades-old southern bluefin tuna that weighed as much as a refrigerator off Victoria’s coast.

The 135.4-kilogram fish was first sighted more than 29 years ago when it was tagged as a juvenile off Esperance in Western Australia. 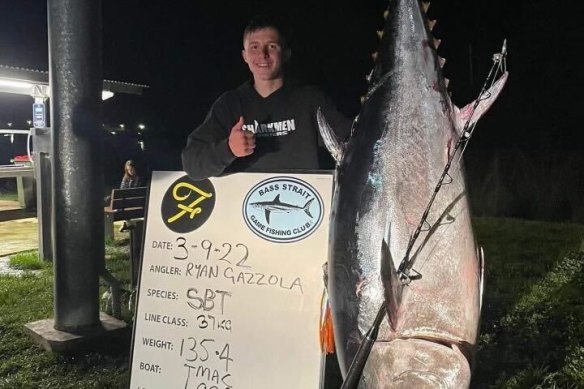 The fish was 52 centimetres long when tagged in 1993 and had grown to 195 centimetres when caught, earning the title for the longest time “at liberty” catch in Australian history for the species.

CSIRO scientist Dr Campbell Davies said tuna were thought to live to about 40 years and this one had been in the wild “probably a bit longer than the average life expectancy really”.

The government agency stopped its tagging program in 2005 because it was not receiving “sufficient, reliable returns from high-seas fisheries”. 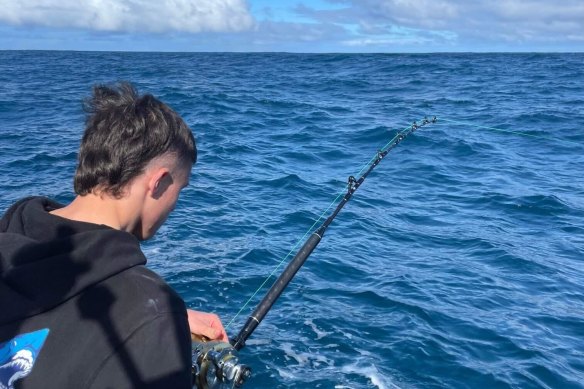 Gazzola had been with friends Jack and Max Carmichael when they noticed birds and dolphins near Gunnamatta, off Mornington Peninsula, on September 3. 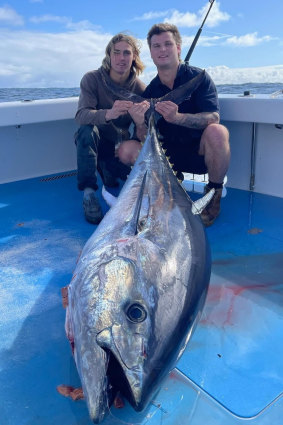 Seconds after they cast off, Gazzola’s line moved.

“It took off like a rocket,” Gazzola said on Thursday. “The fish was on the line straight away.”

The water was at least 70 metres deep when the teen hooked the whopping fish at 1.10pm, but he didn’t bring it on board until after 5pm.

“I was over the moon, it felt too good to be true,” he said.

Gazzola first realised how enormous the fish was when he spotted the animal’s head out of the water as he worked to reel it in. He and his friends brought it into Hastings, where it weighed in at a whopping 135.4 kilograms.

That’s equivalent to some side-by-side fridge models and is more than 20 kilograms heavier than a Vespa scooter.

Gazzola’s stepfather told him to reach out to a well-known fishing podcast once they were on shore, which then put him in touch with the Commonwealth Scientific and Industrial Research Organisation and Fishing Tasmania.

Davies said Gazzola’s catch was “definitely a big fish”, as most southern bluefin didn’t get much longer than 220 centimetres. And while they could weigh as much as 200 kilograms, Davies said fish that heavy were “exceptionally rare”.

When scientists asked Gazzola to keep some meat and the head for research purposes though, there was a problem.

“I don’t have it, it’s at Hastings,” Gazzola explained to researchers.

However, the remains of the fish were saved just before the bins at the dock were due to be picked up.

“Obviously, this is pretty big … as soon as they found out we got the head, he [the official] was organising scientists to come over and everything,” Gazzola said.

Davies said scientists needed the fish’s head to use marks in the otolith’s (ear bones) of the tuna to verify its age.

Gazzola said he’s eaten and given away much of the meat from his catch, but has kept the tail to get it mounted.

He said his adrenaline was pumping during the four-hour effort and he didn’t feel the physical toll until the next day.