Teenage boxer, 18, was shot dead by mistake in street after his best friend was targeted by gang in ‘macho man’ row over girl, court hears

A teenage boxer was shot dead by mistake after he was caught up in a ‘macho man’ love triangle feud between two other men, a court heard.

Cole Kershaw, 18, was shot in the chest and killed after his best friend Spencer Woods was targeted in a pursuit between two vehicles in Bury, Greater Manchester.

As he lay dying in the street on August 12, Cole told 19-year old Woods: ‘He shot me bro, he shot me,’ before eventually succumbing to his injuries.

Manchester Crown Court heard how Woods had become embroiled in a dispute with Kamran Mohammed, 20, because the pair had been dating the same girl.

Mohammed had Woods beaten up by a gang while Woods had threatened to ‘blow up’ the home of Mohammed’s mother, it was said.

Police found text messages sent to Woods by the unidentified girl in the aftermath of the killing, saying: ‘This is all your fault. Kammy didn’t have a problem with you.

‘You caused the problem with Kammy. You was jealous of Kammy.’ 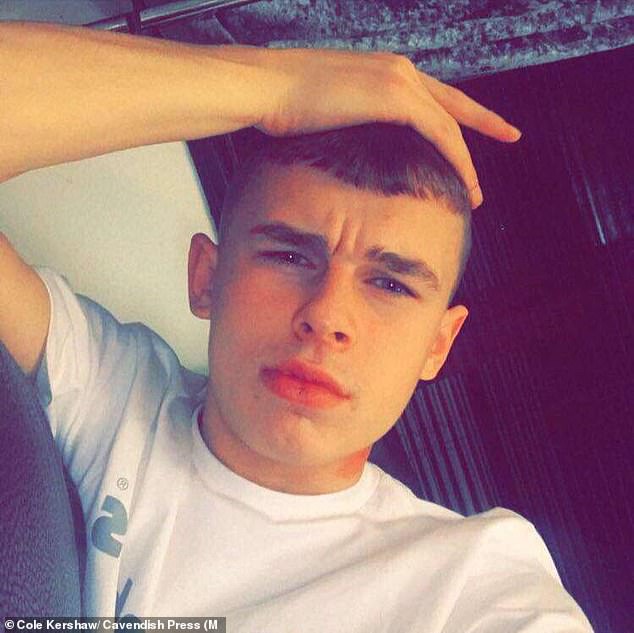 Cole Kershaw (above), 18, was shot in the chest and killed after his best friend Spencer Woods was targeted in a pursuit between two vehicles in Bury, Greater Manchester 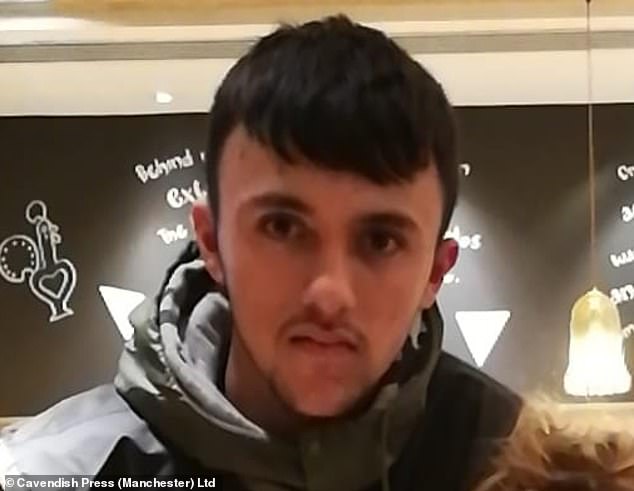 As he lay dying in the street on August 12, Cole told 19-year old Woods (above): ‘He shot me bro, he shot me,’ before eventually succumbing to his injuries

Mohammed, who fired the fatal shot, was today convicted of Mr Kershaw’s murder and jailed for life with a minimum 27 of years behind bars.

Mohammed Khan, 22, Khayam Khurshid, 29, were also jailed for life after being found guilty of murder. They will serve at least 27 and 24 years respectively.

A fourth man, Raheem Hall, 19, of Heywood, admitted assisting an offender and was sentenced to four years in a young offenders institution.

The court heard Woods had been dating the woman for two years before she began seeing Mohammed while maintaining a ‘close relationship’ with her ex.

Jurors were told how in the months before Mr Kershaw’s death, Woods was attacked by a group of masked men who were armed with baseball bats and machetes.

He sustained serious injuries but refused to make a statement to police.

The court heard how Mohammed later threatened the young woman with a gun at her home, telling her: ‘You think you can have more than one boyfriend’. 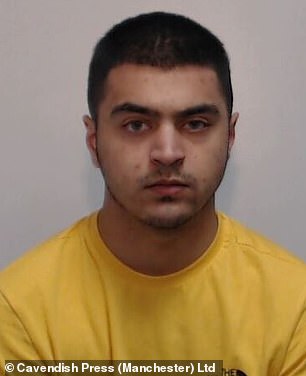 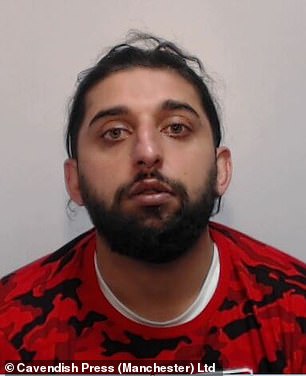 Mohammed (left), who fired the fatal shot, was today convicted of Mr Kershaw’s murder and jailed for life with a minimum 27 of years behind bars. Pictured right: Khalid Kurshid 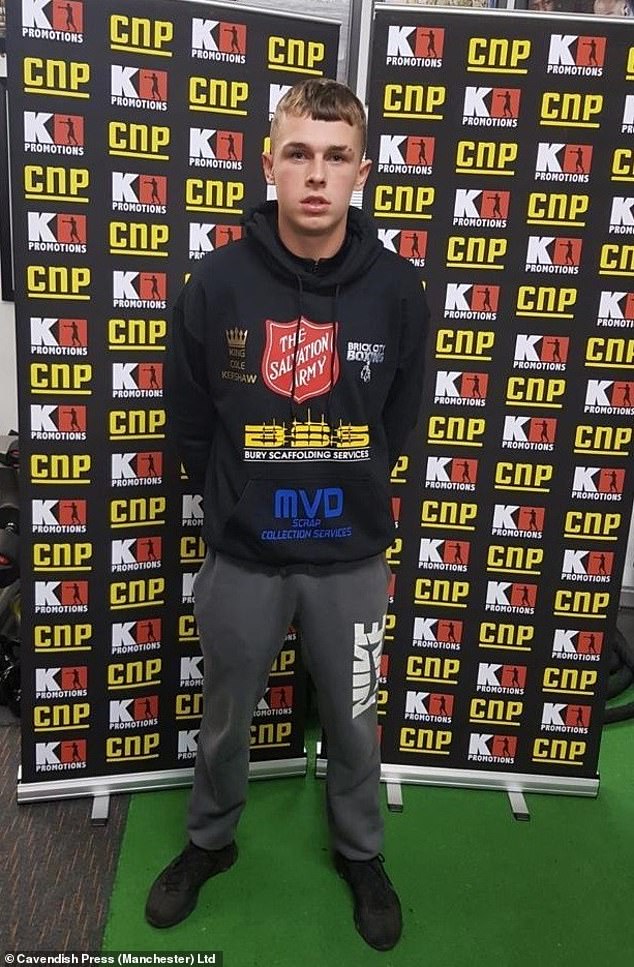 Manchester Crown Court was told how Woods had become embroiled in a dispute with Kamran Mohammed, 20, because the pair had been dating the same girl. Pictured: Kershaw 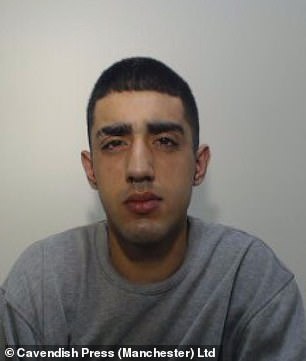 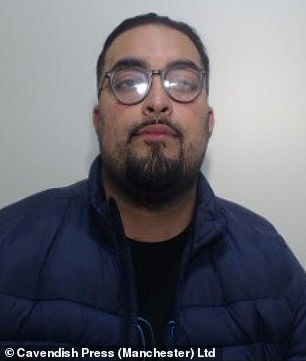 Raheem Hall (left) of Heywood, admitted assisting an offender and was sentenced to four years in a young offenders institution. Pictured right: Mohammed Khan, who was jailed for life

The woman told the jury Woods had been ‘possessive’ and had assaulted her during their relationship.

She said: ‘I stayed in touch with Spencer after the break up and he would always have something to say about Kammy.

‘I knew Spencer hated him. Every word he said about him would be awful or that he was going to do something and vice versa.

‘Kammy would say that he hated Spencer’s guts too.’

Jason Pitter, prosecuting, told jurors: ‘This relationship caused tensions, which increased in the months preceding the shooting, and which had much to do with macho muscle flexing between these two young men.

‘Unfortunately, there was more to it than merely words.

‘The dispute spilled over into actual serious violence and serious threats reaching a crescendo when Cole was killed.

‘It may well be Mr Woods was the intended target that night. Cole was the wrong person in the wrong place at the wrong time with the wrong people.’

The court heard how, on the night of the killing, Mohammed and his friends had ‘readied’ themselves for a violent confrontation with Woods.

They got into a BMW 5 Series armed with a gun and baseball bats, before confronting Woods who was travelling with Cole and two others in a Ford Mondeo.

Two shots were fired while the BMW was pursuing the Mondeo, before a third shot hit Mr Kershaw in the chest as he and his friends attempted to flee the scene.

He was rushed to Royal Oldham Hospital but later died from his injuries.

Just 30 minutes after the shooting, Mohammed attended a party and told his girlfriend: ‘He deserved it’ when asked about the killing.

He subsequently told another friend: ‘I let off two shots and the third one hit him. The wrong person got shot.’

Woods told the court: ‘There was a tension and we would see each other in cars and more likely chase one another. We wanted to hurt each other, probably.’

But a friend Tia Mawdsley told police Cole had tried to help Woods change his lifestyle as he feared his friend had got in with ‘the wrong crowd’. 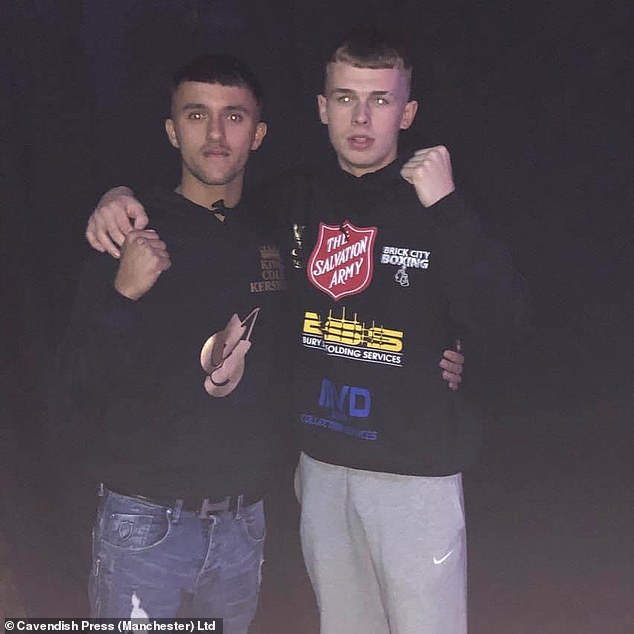 She added: ‘Cole told him every single day he needed to change his life. Now Cole is dead because he wouldn’t listen.’

In a statement, Mr Kershaw’s father Chris Gaynor said: ‘He was on cusp of manhood and his death has devastated all of us.

‘Never did I imagine having to bury my own son.

‘Cole had never been in trouble with the authorities, he had a bright future in boxing and had a smile on his face on a daily basis.

‘While there are wannabe gangsters out there on the street, innocent people will be at risk. Cole was taken from us far to soon.

‘I should be telling him off for cleaning his room, not putting flowers on his grave.’

In mitigation, Mohammed’s counsel Simon Gurney said: ‘His intention was to use the firearm to scare Mr Woods and he has expressed regret and remorse in the death of Cole Kershaw.

‘Youth and immaturity is demonstrated in this case as he was at that time ill equipped for the challenges he faced.

‘He lacked the skills to address what he would do if he was older and wiser.

Sentencing, Mrs Justice Amanda Yip described the killing as ‘senseless’ and added: ‘Cole became embroiled in a situation because he was a loyal friend to Spencer Woods.

‘Sadly, that loyalty was misguided as Mr Woods was a source of serious trouble. He must now live with the fact his actions led to the death of his friend.

‘The life of one young man has been taken away and three other young men face spending significant time in custody. Many lives have been seriously blighted.’