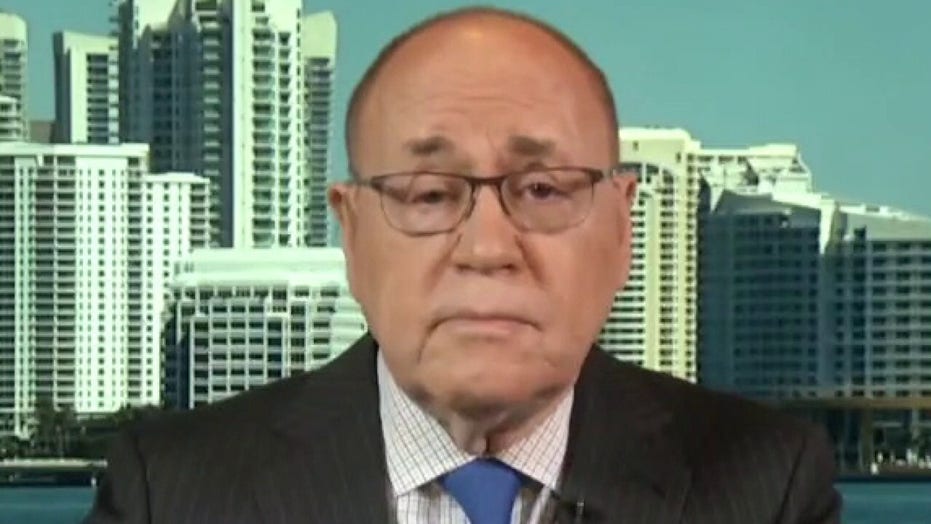 President Biden is deploying military doctors and health care workers to bolster hospitals amid the spike in omicron variant cases. But in the last few months, thousands of health care workers across the nation have been terminated over refusing to comply with vaccine mandates, leaving health care providers in the lurch with staffing shortages while bracing for more patients.

In New York state, Gov. Kathy Hochul declared a state of emergency over the omicron variant and called in the National Guard to assist with nursing homes. She added that hospitals in the state at over 90% capacity could be ordered to stop elective procedures to focus on the surge. Biden said testing faculties will also be opened in the state.

Four months ago, disgraced former New York Gov. Andrew Cuomo announced a vaccine mandate for health care workers, and those who did not comply faced termination.

Since then 31,858 health care workers at nursing homes, hospitals and other health providers have been terminated, furloughed or forced to resign because they would not comply with the mandate, according to New York health data provided to Fox News. The total number of inactive employees in the state due to the vaccine mandate sits at 37,192 as of Dec. 21, according to the data. 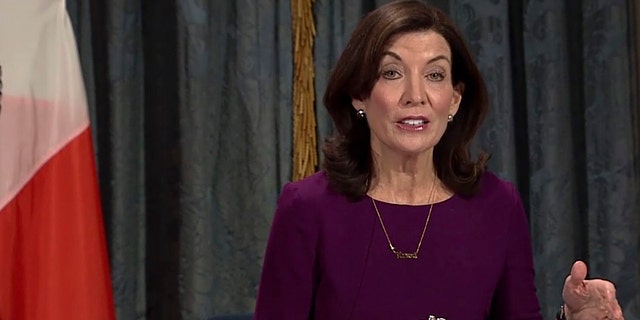 In this image taken from video, New York Gov. Kathy Hochul speaks during a virtual press conference, Thursday, Dec. 2, 2021, in New York. Multiple cases of the omicron coronavirus variant have been detected in New York, health officials said Thursday, including a man who attended an anime convention in Manhattan in late November and tested positive for the variant when he returned home to Minnesota.
(AP Photo)

More than 2,350 nursing home staffers alone were fired for not complying. The New York National Guard deployed 120 members to 12 nursing homes and long term care facilities to assist with staffing shortages this month.

Nurses who still have jobs in the state have been sounding the alarm on the staffing shortages for months, and are bracing for it to only get worse.

“We have a massive nursing shortage,”  Eric Smith, the statewide field director for the New York State Nurses Association, told the New York Daily News last month. “We have a vacuum in the double and triple digits all across the New York area.”

Omicron has been detected in every state, and various states keep breaking records for daily coronavirus cases due to the spike. COVID cases have increased by 48% over the past week across the nation, and the average daily cases sit at 182,682, according to Johns Hopkins. Hospitalizations for the omicron variant, however, have so far been lower than other variants, with hospitals nationwide seeing a 2% increase in patients.

Massachusetts and New Jersey are among the states seeing spikes. Vaccine mandates in those states also led to hundreds of firings and resignations.

Across three health care systems alone in Massachusetts, there have been 506 confirmed firings over vaccine mandates. The Massachusetts Department of Public Health did not immediately provide Fox News with data on total firings and resignations over the mandates.

The state is grappling with staffing shortages this month and moved to cut some nonessential, elective services and procedures by 50%, and Republican Gov. Charlie Baker activated 500 National Guard members to assist hospitals. 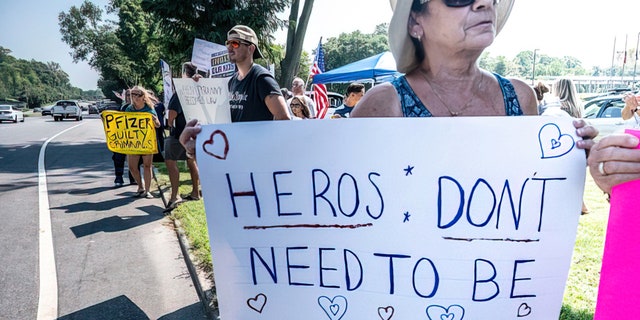 While in New Jersey, there have been 238 confirmed firings or resignations across two hospital systems due to vaccine mandates. Fox News asked the New Jersey Department of Health for data on the total number of fired health care workers, but a representative said the department did not have that information.

New Jersey has not activated the National Guard to assist with omicron spikes, but Gov. Phil Murphy said “everything is on the table” last week when asked about how the state will combat the spikes.

Staffing shortages are occurring while flu cases, which were very low last year during the pandemic, are spiking, notably in Washington, D.C., New Jersey, Kansas and Indiana. 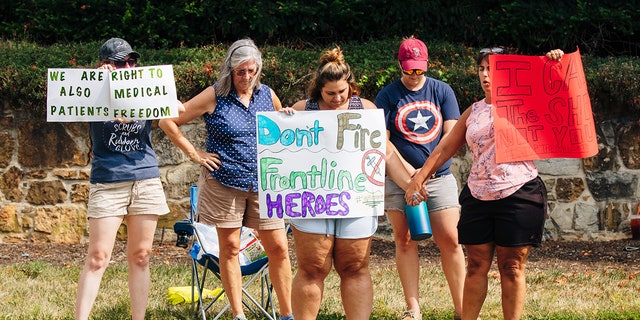 Hospitals in other states grappling with shortages amid the spikes have halted vaccine mandates while also activating the National Guard.

In Ohio this month, hospitals across the state hit the “pause” button on their vaccine mandates, pointing to legal reasons and staffing shortages. And Republican Gov. Mike DeWine activated 1,050 Ohio National Guard members to assist with hospitals.

“We’re pretty much running full steam 24 hours a day, particularly with ICU as high as it’s been, it really takes a toll on our caregivers,” said Ohio Hospital Association director of Media and Public Relations John Palmer.

Iowa meanwhile is spending more than $9 million to hire out-of-state nurses to cope with a spike in hospitalizations. The state will pay nurses through a Kansas company, who will be expected to work 20 hours of overtime at $330 an hour.

The staffing shortages, terminations and now the spikes in omicron cases have not been lost on critics, who are calling the problems “government created.”

The White House did not immediately respond to Fox News’ request for comment on the activation of military health care workers following thousands of unvaccinated workers being fired.

“The bottom line is: We want to assure the American people that we’re prepared.  We know what it takes.  And as a — as this group of bipartisan governors has shown, we’re going to get through it by working together,” Biden said Monday on his call with the National Governors Association.