Texas pastor Matt Hagee issued an apology and said he properly did not vet the organizers of a political event held at the church building, which concluded with attendees chanting, “Let’s go Brandon” — an idiom insulting President Biden.

TEXAS CHURCH UNDER FIRE AFTER CHANTS OF ANTI-BIDEN PHRASE CAUGHT ON VIDEO: ‘GUT-WRENCHING’

Cornerstone Church, a nondenominational congregation in San Antonio, received criticism on social media last week for hosting a right-wing political event called the ReAwaken America tour organized by Clay Clark of the “Thrivetime Show” podcast that included speakers such as former National Security Adviser Michael Flynn and Roger Stone, according to a flyer for the sold-out event.

Hagee, who welcomed the crowd, now say “it was not appropriate to allow this event at our church.”

“Last week I allowed an event to be held at Cornerstone Church by an outside organization. Regrettably, the organization was not properly vetted,” Hagee said in a Thursday statement. “The Church is not associated with this organization and does not endorse their views.”

The pastor added that he “was invited to welcome the crowd where I thanked veterans for their service and thanked the crowd for their commitment to their faith.”

“I deeply regret, and ask forgiveness, for what took place in the Cornerstone sanctuary as a result of my oversight,” he said. “In the future, Cornerstone Church will ensure that organizations using our facility are an appropriate reflection of our mission and vision.”

Speakers apparently made false claims about the COVID-19 vaccine and said the U.S. should only have one religion, according to local news outlet MySanAntonio.com. 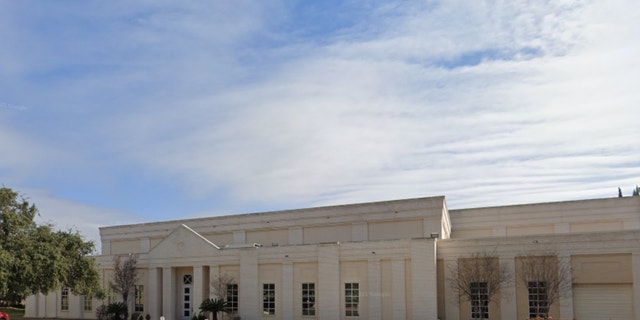 The event received blowback from left-leaning pundits and other local religious leaders. Commentator Lindi Li said in a Nov. 14 tweet that the “church should be taxed” if it hosts political events.

Rev. Dr. Chuck Currie of Oregon said in a Nov. 14 tweet that “any church engaging in the white Christian nationalism that John Hagee’s Cornerstone Church does has long forsaken the teachings of Jesus, the Prince of Peace.”

“And for those confused, QAnon is incompatible with Christianity,” he said.

The phrase “Let’s go Brandon” has become an idiom to insult Biden and the media after an NBC sports reporter incorrectly reported in October that fans at a NASCAR race were cheering for “Brandon” when they were really chanting a more profane slogan at the president.