A chef who liked to stay up late watching football on his phone is believed to have died after being electrocuted by the handset.

Somchai Singkhorn, 40, was last seen on Tuesday night laying on his mattress with a can of beer, watching TV on his phone with his headphones plugged in.

But Somchai, who worked as a restaurant cook, was found dead the next morning in his room in Samut Prakan, Thailand, with burn marks on his arm and neck where they had touched the cable.

The phone was plugged into the mains and the earphones were resting across Somchai’s arm, face and neck. 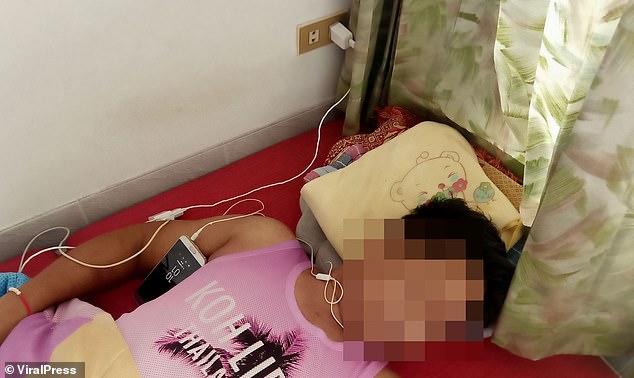 Somchai Singkhorn (pictured), 40, was last seen on Tuesday night laying on his mattress with a can of beer watching TV on his phone with his headphones plugged in 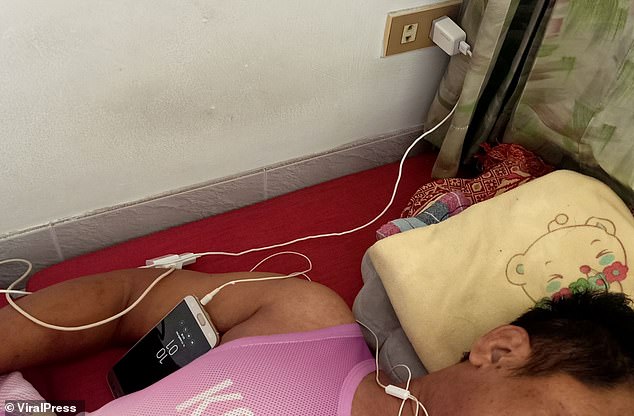 Somchai Singkhorn, 40, is pictured after police discovered him dead in his room on Wednesday. Authorities suspect that his phone cable electrocuted him on Tuesday night due to the burn marks across his arm and neck where the cable rested 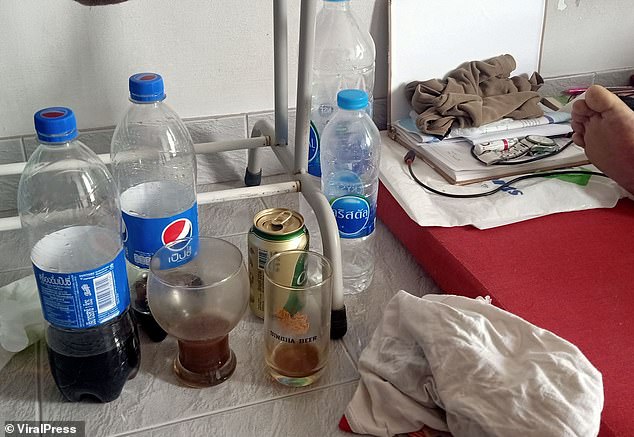 Though police suspect electrocution as the cause of death, officers said that Somchai could have died by other means. They noted that beer cans and fizzy drinks were found at the end of his bed (pictured). They failed to give any more information about suspected causes

Stunned roommate Saeng, 28, from neighbouring Laos, called his boss to report that his friend was sick. It wasn’t until later that he discovered Somchai was actually dead.

Saeng said that it was normal to see Somchai listen to music or watching football on his phone before he went to bed.

He said: ‘He always stays up late concentrating on his phone before he sleeps. Last night when I last saw him alive he was doing that, the same as other nights. He was watching football.’

The Laotian roommate said that he tried to wake him up in the morning but he did not respond.

He called their boss Wiroj Poolsawatmongkol, 51, to help assess what had happened.

Saeng said: ‘I went to wake him up but he was not moving, so I [was] worried that he might be ill. I contacted our employer but when he came to check, he told me that Somchai was dead.’ 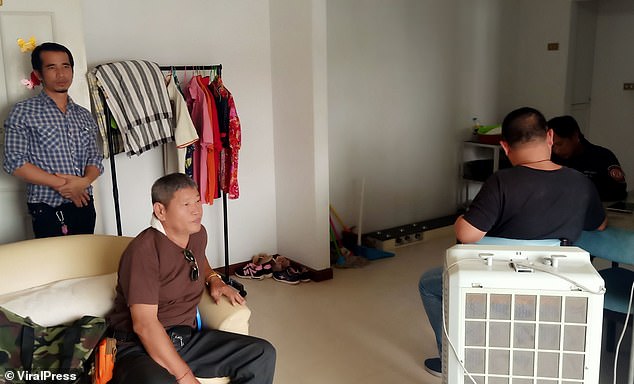 (Pictured: Officers entering Somchai’s home) Somchai’s roommate called their employer to help find out what had happened to the 40-year-old when he couldn’t wake him up

The police arrived to investigate and they found cans of beer and Coca Cola at the deceased’s feet.

The body has been taken for an autopsy where the cause of death is being investigated.

Police Colonel Warawach Thammasarot said: ‘The deceased was laid on the mattress with his phone and earphone[s] on him but we also found beer and fizzy drinks near him.

‘From the initial checks, we suspected that he was electrocuted but we need to check everything and wait for his postmortem examination results before we confirm the exact cause of death.’

The body was sent to the Siriraj hospital for the postmortem examination before it will handed over to his family for the funeral.