That strange feeling of a city missing its grand final vibe

In the days before last year’s grand final, 13 months ago now, the view outside Punt Road Oval was one of industrious splendour. The place was buzzing and fizzing and frothing – whirring with anticipation.

It was that moment in the Melbourne calendar year – grand final week – when Yarra Park might as well be called Yarra Precinct.

There was the beep-beep-beep of Harry the Hirer trucks unloading marquees and portable dunnies, and the clattering assembly of cyclone fencing and plastic bollards, not to mention all the people blinking in the spring sunshine.

They could smell the fresh cut grass of spring, and gaze through the plane trees upon the monolithic MCG, knowing that an annual rite – right? – of this city was under way. The grannie was almost here.

Now, an eternity later, Richmond Railway Station is deserted. Brunton Avenue is silent. And the overgrown grass in this gathering place is thick with thistles, with little more activity than a few passing joggers and dog walkers and the great yawning maw of our grand stadium looks less like the thumping heart of Melbourne than it does a cold concrete chasm. Empty, and alone.

I meet Richmond Football Club president Peggy O’Neal next to the statue of club legend Jack Dyer outside the Tigers’ home, for a walk around the 'G.

The fringe of her hair is ever so slightly skewiff, a familiar byproduct of our lockdown home haircuts. O'Neal is somewhat bemused – she’s actually enjoying these oddly unhurried days before the biggest match of the year.

No long lunch with the other club presidents. No long meetings with the AFL commission. No squeezing coterie events and corporate brekkies and warm evening cocktails into the gaps in her work schedule. But also no Family Fun Day, or captain’s run training session. She misses those, just as she misses catching up with past presidents and CEOs and coaches of the club.

O’Neal lives only a few doors down from the historic home of Dyer himself, and says people in her neighbourhood are still putting up yellow and black bunting, and flags, and painting their fences and doors. They’re still stopping in the street to talk about Tigers' spearhead Tom Lynch and Geelong maestro Gary Ablett Jnr, and which team will prevail and why. 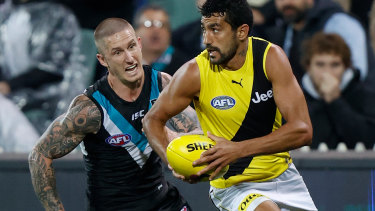 But there’s no long line of fans outside the Tigerland Superstore. And she can’t amble through the club itself to watch the staff work, listening to that thrum that pulses in any office when good hard work is getting done.

"We’re lacking that sense of connection," she says. "I think we’re feeling distant from one another. Like there’s something missing. There’s just an absence of that – I don’t know what you call it? – vibe." 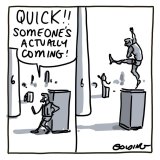 Is there ever. There’s a great line in John Powers’ famous footy book, The Coach, about Ron Barassi’s triumphant North Melbourne team of 1977, and it stands out more than ever as this strange Saturday nears: "Melbourne, in its Grand Final weeks, becomes a slightly daft, mildly off-kilter city".

Powers was pointing out how narrow we seem at this time, the way local media will laser in on the tweaked hammy of a forward pocket, and without thinking push conflict in the Middle East onto page two – or even four, or six – of the daily newspapers.

He was thinking about how scared boasts are made and bets laid and tickets scalped and hotel rooms filled, and how our footy furphy gathers baffling gravity – a weight simply not befitting its actual importance. It’s obviously silly. It’s utterly ours.

"The week is important partly because everyone knows that deep down this is Melbourne’s game. The game was invented in Melbourne, and Melbourne has been its heartland ever since," says Robert Hess, a footy historian and research fellow at Victoria University. "There’s a parochial sense of ownership of the game, particularly the grand final and its rituals."

Year after year the game swells more than a little in this week. It was before the 1939 grand final between Melbourne and Collingwood, for instance, that the first ever patchwork crepe paper lattice was held in front of a players’ race, and with that the banner was born, with floggers to follow in the 1940s, and cheer squads in the 1950s, and the North Melbourne Breakfast in the 1960s. 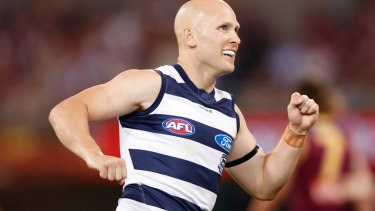 Geelong’s Gary Ablett celebrates a goal in his team’s victory over Brisbane in the second preliminary final.Credit:Getty Images

For entertainers like Greg Champion, grand final week is the highest earning stretch of the year. Between the Vingt Cinq Club and the Athenaeum Club and the Carbine Club, he does between five and eight paying gigs every year. Not to mention The Coodabeens playing on the concourse outside the MCG, singing This ground is our ground.

"For a performer, it’s two months of income – lunches up the shizen, and then some!" Champs roars. "If you stop to count the beans, you might get glum."

The celebrations began to draw in families and children more than ever, too, and not just with monster inflatable blow up obstacle courses, or pontoons on the Yarra for the longest kick competition, but for that native and naive feeling that you are truly part of this thing.

The heart of writer Tony Wilson, a Hawthorn supporter and author of 1989: The Great Grand Final, goes instantly to open training at Glenferrie in the 1980s.

"The sun going down, doughnuts and sausages and bands and merch stands, and this sparkling training session that’s about 12 minutes long," Wilson says. "It’s this prancing back and forth kick-to-kick, with everyone oohing and ahhing and clapping politely: ‘The boys look on tonight!’"

The absence of that through this entire 2020 finals series – especially for the supporters of Richmond and Collingwood and St Kilda and the Western Bulldogs – is part of our sadness. We’ve been robbed of our rhythm and the demarcation of our seasons.

"It’s all been crushed together," Wilson says. "I can barely tell if it’s Wednesday or Saturday, let alone footy season or cricket season. It feels like nothing season."

Sophie Cunningham, a Cats fan and the author of Melbourne, a beautiful book that examines our town by walking its streets, has felt that discombobulation since round one.

She was instantly wary of this "faux football" season – it seemed staged solely for our distraction.

"I watched the first game that had no crowd, and no noise, and it was like being trapped in some weird science-fiction film," she says. "It was just disturbing. I found it quite destabilising."

The fake crowd sound piped into the coverage later made it feel less surreal, but no less strange, and it was still hard for Cunningham to see footballers as being particularly relevant during a runaway pandemic.

Even as finals approached, and her Geelong boys picked up steam, the remove from reality was still too blatant.

"For me, Chris Scott’s tan summed it up," she says. "We’re not all in this together – most of us were stuck down here while real life was happening elsewhere."

Cunningham suspects she couldn’t bond to the game on television because her footy story is so tied up in walking from home in Fitzroy, south to the MCG, and sitting there in crappy weather, feeling engaged with the outside world, and with shared memories of euphoric wins and horrible, horrible losses – a nostalgic narrative woven into the fabric of her fandom.

"I do love the vibe and excitement of this week," she concedes, "but I do think the public holiday is bullshit. I don’t actually understand that at all."

She’s right of course. There is a certain ridiculousness in having a day off work this Friday, for a parade that isn’t happening, to celebrate a match the next day – or rather, the next night – which is being played on a humid and dewy little footy ground more than 1000 kilometres away.

Our absurdity definitely dialled up to a new stir crazy height – or low – this week, when a piece of turf was lifted from the MCG, placed reverently in a refrigerated lorry, and driven to Queensland, as if to sew something hallowed into the surface of the Gabba. 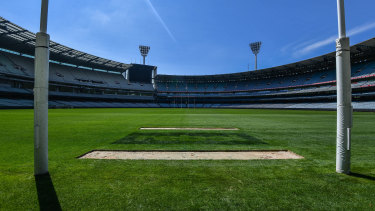 Two strips of grass from the MCG goal square are dug up and will be sent to the Gabba for the grand final.Credit:Joe Armao

But maybe we need all this folly right now, and perhaps more than ever. We're itching to cross the rubicon, and we've earned it. We’re so close to the end, aren’t we? Surely we’re almost there.

Late in Powers’ book he describes a moment at the end of the 1977 parade when the coaches – having driven down past the Imperial Hotel and Pellegrini’s and Hill of Content – both stand on a dais outside Myer with the governor and lord mayor.

Barassi jokes about "T-Shirt Tommy" having beaten him in two grand finals, and being sick to death of it.

Then Hafey says something else, something I think we all feel now, and have felt all year, and will probably feel for some time yet: "I just wish today was tomorrow."

Keep up to date with the best AFL coverage in the country. Sign up here to our Real Footy newsletter delivered to your inbox on Mondays and Fridays.

a, city, feeling, of, strange, that
Celebrities