The feisty women behind 100 years of the CWA

The founder of NSW Country Women’s Association Grace Munro was a top gardener and an expert needlewoman who was said to be able to drive a buggy at a gallop as well as any man.

Renowned as a good shot, her words also hit the mark. 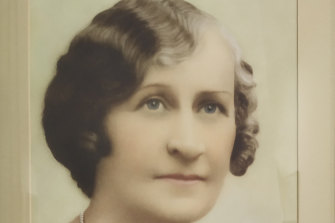 Grace Munro, the first president of the CWA in NSW, mobilised members to save women and children dying because of lack of maternity care in rural hospitals. Credit:CWA

At the CWA’s inaugural conference in Sydney nearly 100 years ago, Mrs Munro described the system of training medical students and nurses as “stupid”. Country maternity wards and rural training could have prevented the deaths of 10,000 NSW women in childbirth and 20,000 newborns in the previous 30 years.

A report on the conference of thousands of bush women by Catholic Press said it had been “instructive to hear that women at last are awakening to a sense of their power”.

Mrs Munro’s words mobilised an army of women at new branches from Sydney to Broken Hill. Within a year, the Millthorpe branch had raised 78 pounds (approximately $4500 today) for the Orange and Blayney hospital. Within nine years, the women had funded the opening of a baby health care centre with similar initiatives by other branches statewide.

Now the CWA’s latest generation of members are mobilising to celebrate the 100th anniversary of their first state conference in late April 1922.

Responding to a call for a postcard from each branch to mark the occasion, the Morongla Creek branch near Cowra wrote, “We have 24 members and continue to soldier on, as a happy and do-what-we-can branch.” The Kicatoo branch, west of Condobolin wrote: “Pride is our Past, and Faith is our Future.” 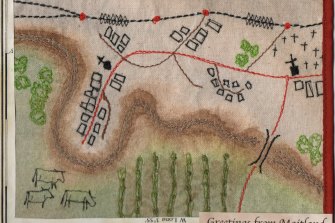 Maitland’s branch of the CWA created this postcard to celebrate the organisation’s 100 birthday. Credit:CWA

The creator and organiser of the postcard centenary project, Diana Whitton of Waterloo, said she had received more than 150 postcards so far. Many arrived late with apologetic notes saying every branch member had wanted some input.

The public may equate the CWA with its famous scones and cream, but Dr Whitton says they are “an entrée into a discussion about the potential women have to help other women”.

“People say, ‘You do the scones with jam and cream,’ but we do more,” Dr Whitton said. 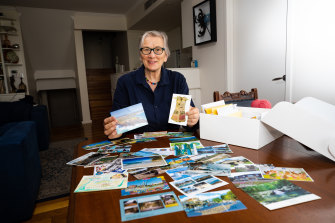 Manly branch president Diana Whitton with some of the CWA postcards.Credit:Edwina Pickles

“And a lot of people say, ‘I can’t cook, I can’t sew.’ But I say, ‘I can’. We have heaps of people who can do that and teach those skills. What we would love is a photographer, a media person, someone to do layouts … We like new skills, diverse ideas and backgrounds.”

Members with fundraising and sales skills helped her branch raise $10,000 for disaster and homelessness services last December from the sale of goods made by others.

Today, the CWA in NSW is still Australia’s largest women’s organisation with about 8000 members and more branches in NSW than fast-food chain McDonald’s has stores.

Founded as an apolitical, non-sectarian women’s organisation, it still lives by Mrs Munro’s motto: “For women, through women and by women”.

Dr Whitton, a member of the Manly branch and a retired Sydney academic, said the CWA continued to lobby for improved conditions for women. Her branch will celebrate International Women’s Day with a lunch with Herald investigative reporter Kate McClymont.

Since it started, the CWA members have funded bush nurses, built and staffed maternity wards, hospitals, schools, rest homes, and holiday getaways for rural and remote families. During World War II, they knitted army camouflage nets and turned fleece into vests and warm clothes for soldiers.

Today, many branches are in cities and towns, and an increasing number of young people are joining.

In a column this week, Kate Halfpenny wrote that if the CWA was in charge, Australia wouldn’t face the current shortages of rapid tests or delays in results for PCR tests.

Recalling the women running the CWA scone stall at the Easter Show, Halfpenny said they were “organisational guns with lived and learned experience who take charge in times of crisis with no fuss. Who know that failing to plan means planning to fail.”

Stephanie Stanhope, president of the CWA of NSW, said its members had been “initiators, fighters and lobbyists who were passionate about making rural and regional NSW better for those who lived there”.

Lillian Marshall is the president of the Crookwell branch, the first created in NSW after the bushwoman’s conference in April 1922 that was addressed by Mrs Munro.

To mark the occasion, the branch had funded a new bronze plaque to celebrate the contribution made to the community by its members. It will celebrate the 100th birthday with an afternoon tea, where a member famous for her bird calls would provide entertainment.

Mrs Marshall said the CWA had done “heaps of things”.

“We have done so much in health, so much to support victims of bushfires, we teach in schools. We are there for anything that is thrown for us. There is something for anyone, including those people interested in international events, agriculture and the environment.”

Now in her 70s, she joined the branch in 1985 when a suit she had made won the state competition for handicrafts. That prompted her to “go along and see what these old girls do. I was amazed”. Nearly 40 years later, Mrs Marshall said, “It is never boring.”

A digital display of the postcards will be displayed at the Royal Randwick Racecourse as part of the centenary celebrations in May.