Poignantly tiny, the Queen’s coffin was followed by her closest family as she left Buckingham Palace for the last time on September 14. King Charles. The Princess Royal and her son and husband. Princes William, Harry, Edward, Andrew. Familiar faces all. But hold up – who was the gent in uniform next to the Earl of Snowdon?

Even dedicated Windsor watchers and global newsroom editors were stumped by the man eventually identified as the Duke of Gloucester, aka Prince Richard – who knew? – the Queen’s first cousin. 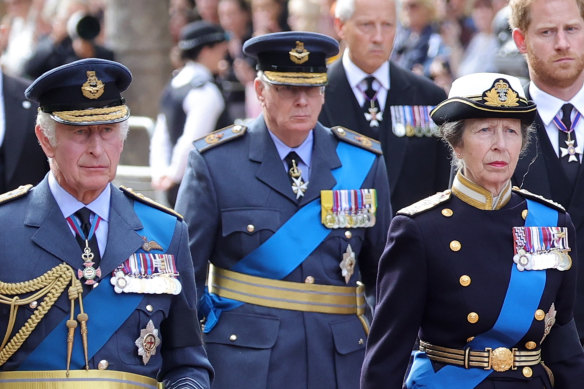 King Charles III, Prince Richard and Princess Anne walk behind the coffin during the procession for the lying-in- state of Queen Elizabeth.Credit:Getty

Such is his low profile that a 2011 YouTube interview only has 80 likes. Yet as it turns out, the duke is well into his fourth decade as a full-time working royal. That he’s managed to fly under the radar all this time perhaps stems from the fact he didn’t ever plan on his major role.

Richard of Gloucester was once an architect. Now, he’s one of a handful of previously overlooked or unknown royals and peers with pivotal roles to play in not just designing and taking part in the Queen’s historic funeral, but shoring up the Windsors’ ongoing popularity and legacy.

Think Sophie Wessex. For 23 years, she’s been quietly carrying out more duties than the new Prince or Princess of Wales, but nobody has paid much attention. Now, since the death of her mother-in-law, the countess has at age 57 become the Windsors’ go-to right-hand woman.

Think the Duke of Norfolk. Who? Yep. The UK’s top-ranked peer, he’s in charge of the entire funeral. He said “it’s all pretty scary”, but as a former racing driver and daredevil skier managing a reported $171 million fortune he thrives on a challenge.

But let’s rewind to Prince Richard, the 78-year-old new face in the ranks. When he was born to the son of King George V and Queen Mary and Princess Alice, he was fifth in line to the throne behind princesses Elizabeth and Margaret, his father and his brother William. 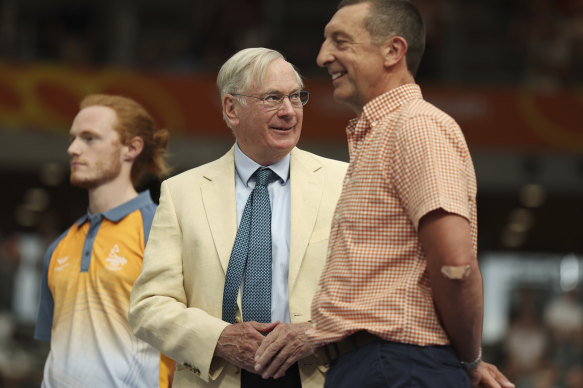 Prince Richard at the Commonwealth Games held in Birmingham earlier this year.Credit:AP

With William as Gloucester heir, Richard needed a job. He spun a Cambridge architecture degree into a partnership at a London firm and in 1972 married Birgitte van Deurs, a Danish language student he met at Cambridge. (The New York Times headline: Queen’s Cousin Will Wed a Secretary.)

Now living at Kensington Palace, the father of three has represented the Queen at official functions, is trustee of the British Museum and has over 150 patronages linked to the built environment, heritage and humanitarian issues.

During Trooping the Colour in the 2022 Platinum Jubilee celebration, Prince Richard was on the balcony at Buckingham Palace – Harry and Meghan didn’t make the cut – and in the same week sat directly in front of the Sussexes at the National Service of Thanksgiving.

The Duke of Norfolk

Call it hiding in plain sight, an art at which the Duke of Norfolk is also adept when it comes to the general public.

But his inherited role of Earl Marshal means Edward Fitzalan-Howard (“It’s Eddie”) is a big fish in royal and political halls of power. 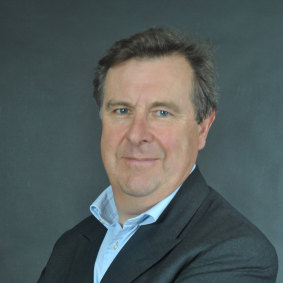 Entrusted with overseeing occasions including the state opening of parliament, he signed papers at the proclamation of Charles as King. Next up, organising the state funeral as well as the 2023 coronation.

The duke, 65, should know the ropes: his ancestors have held the – unpaid – Earl Marshal post since 1672. His grandfather masterminded the Queen’s 1953 coronation, Winston Churchill’s 1965 funeral and the 1969 investiture of the Prince of Wales.

Upholding ancient traditions haven’t always been the Duke of Norfolk’s day job. The owner of Arundel Castle, his family seat for over 850 years, the duke has run a bottled gas company and a joinery firm.

“Eddie has bags of aristocratic self confidence,” a source told The Times. 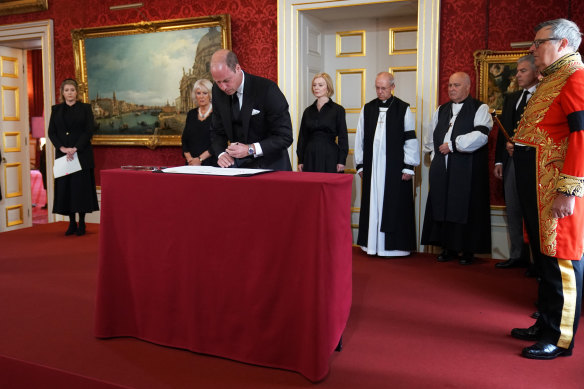 The Duke of Norfolk (far right) watches as Prince William signs the Proclamation of Accession of King Charles III.Credit:Getty.

He gave one of the family’s other properties, the 126-bedroom Carlton Towers in North Yorkshire to his brother Gerald, who starred with his wife Emma in ITV series Keeping Up With The Aristocrats.

Still, while he’s an event maestro, the father-of-five missed the 2011 wedding of Prince William and Kate Middleton.

He reportedly declined an invitation amid a split from wife Georgina, which was said to be so acrimonious they couldn’t be in the same room.

“The buck stops with me,” the duke told The Times of the Queen’s funeral, which he’s been planning via annual meetings for 20 years.

Once he’s overseen it, he has to get to Windsor before the coffin: “I’ll be going down the M4 to overtake it so everything should turn out fine.”

Yes, he’s very calm according to all reports. Again, a family trait.

His father said, “I organised the crossing of the Rhine [in WWII] in 24 hours—the Queen’s funeral will be a piece of cake.”

Sophie Wessex may not be viewing the farewell to her ‘mama’ in such logistical terms. After her 1999 marriage to Prince Edward, the former PR exec and mother-of-two became so close to the Queen she’s been called her “second daughter” and is tipped to be in line for a host of the most valued royal patronages. 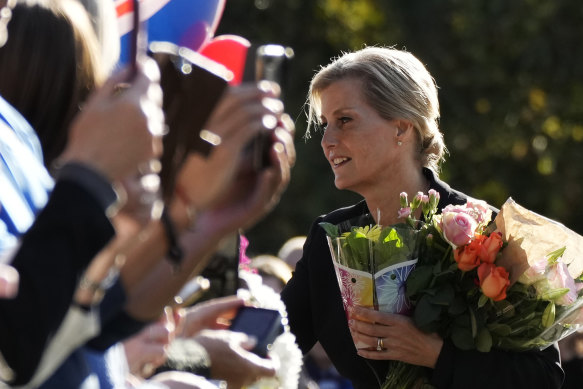 Sophie, the Countess of Wessex, meets crowds outside Windsor Castle.Credit:Getty

Living at Bagshot House close to Windsor Castle meant Sophie saw her mother-in-law almost daily, to watch movies or walk dogs. But she spread her friendship wide, reportedly jumping in the car to be the first in the family to visit the Duchess of Sussex, Meghan at Windsor when she had son Archie.

She later acted as peacemaker at Prince Philip’s funeral by talking for ages to self-exiled Prince Harry.

Her swollen-eyed grief has been visible since the Queen’s death, but so has her position as a senior royal.

She took precedence over the Princess of Wales at the Westminster Hall lying-in-state service and was handpicked to greet mourners in Manchester on September 15.

Not a glossy, sylph-like princess or high-maintenance duchess, she’s an experienced middle-aged woman whose calmness, sense of duty and work ethic is suddenly appealing to a British public looking for a safe pair of hands in the Queen’s absence.

Already patron of more than 70 charities and organisations including those to stop gender-based violence in conflict, Sophie – who once cycled nearly 1000 kilometres for a good cause – is in the running for the title of Duchess of Edinburgh.

That will put her at the actual and metaphorical heart of King Charles’ slimmed-down monarchy. She’s fine with that, she told The Telegraph in 2021: “We are still a family, no matter what happens. We always will be.”