The policeman who said ‘no’ to attending Australia’s last execution

As a career cop, Bryan Harding was a walking contradiction: a likeable man who attracted enemies; a union man who fell out with his union; and a hard detective who considered himself a pacifist.

Many old-school police saw him as a dangerous revolutionary who opposed capital punishment, tried to keep young offenders out of prison and looked for social rather than legal solutions for conflict. Along his 40-year police journey Harding had some senior officers try to block his career path and was forced to resign as Police Association secretary when he pushed through much-needed reforms. 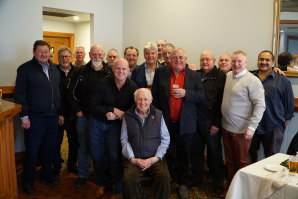 Bryan Harding, seated, surrounded by friends and former colleagues at a celebration at Hogan’s Hotel in Wallan last week. Harding has written a book detailing his time with Victoria Police, including as leader of the police union. Credit:The North Central Review

He was one of the first to say major factors in police stress were antiquated work practices, bullying, a dysfunctional promotion system and a failure to protect members’ mental health. It made him few friends with his superiors, who for years tried to mothball him. At one point his papers were marked “Not fit for promotion”.

“I rarely found a high-ranking officer interested in the welfare of the members,” he says.

Long retired and entering his 90th year, he has written his memoirs. They take him from growing up a country policeman’s son in the 1930s, to joining the police force in 1950, dealing with some of Australia’s most dangerous criminals and heading the powerful Police Association. Armed with comprehensive diaries that stretch back 70 years, he has given us an eye-witness report on history.

The Hanging of Ronald Ryan

Harding knew (professionally) a small-time thief with big-time ambitions. His name was Ronald Ryan, and in 1967 he would be the last person in Australia subjected to the death penalty.

Harding arrested Ryan in 1956 and found he “had a charming manner with a bit of swagger, and a lot of confidence”.

A few years later Ryan was committing a burglary a week to finance his gambling habit. Each time he was arrested he would ask to see Harding in the city watchhouse. “I would visit and he would invariably open with ‘Don’t start preaching to me’ and we would go from there. I was hopeful that he would reform.”

In 1965 Ryan and fellow inmate Peter John Walker escaped from Pentridge Prison. Prison officer George Hodson was shot and killed in the process. 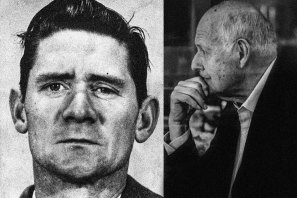 Ronald Ryan (left) was the last person to be executed in Australia. Bryan Harding (right) was invited to attend the hanging at Pentridge Prison but declined. Credit:Archive, supplied

Ryan was found guilty of murder and hanged in Pentridge in February 1967.

Harding’s old school and footy mate Jim Mulvey was deputy sherriff and along with Sherriff Gerry O’Brien assigned to supervise the execution. “They told me prior to the hanging … that Ryan when asked would he like witnesses to attend on his behalf nominated me amongst others.

“I was tempted just briefly but I am very grateful I refused,” he says.

“All of these men were adversely affected by the experience. O’Brien and Mulvey [were] destroyed by it,” recalls Harding. Harding was one of the few police in those days who opposed state executions. “Some called me a weak bastard.”

The toll of corruption

“When police do good things we are proud. When they go rogue we suffer and feel a kind of collective shame. To this day I suffer those reactions,” Harding writes.

Corruption in policing is the postscript to unpopular laws where there is a public appetite for something that is illegal. Before abortion was legalised, it was part of the Homicide Squad’s brief to investigate the booming backyard trade.

Some of the squad protected a group of doctors and medical staff performing the operations, rationalising that by turning a blind eye (for a price) they were making sure women avoided backyard butchers.

When Harding, then a suburban detective, charged one of the doctors (after a husband turned up at the station to complain) he had his first dealings with entrenched corruption courtesy of one of the most charismatic men in the force, then Detective Sergeant Jack Ford.

“Ford and I had an interest in thoroughbred racing and we arranged to meet at a Caulfield meeting.

“He had one huge bet with a rails bookmaker. If it was done to impress me, it both succeeded and bothered me.

“He put to me a startling proposition. If I followed to the letter his advice as to any testimony at the committal proceedings of Dr Lewis Leon Phillips, or at any subsequent trial, I would be rewarded with a massive monetary gift. If I further assisted at the trial and Phillips was acquitted, the reward would be doubled. He also wanted a full interpretation of my shorthand notes.

“I thanked him for his interest in my financial future, but no thanks.”

Not one to take no for an answer, Ford rang Harding’s wife Lorna: “He pleaded with her to convince the reluctant bloke that this was the financial opportunity of a lifetime. He got the same response.”

Harding reported the attempted bribe but nothing was done until 12 years later in 1970, when the government reluctantly announced a judicial inquiry into abortion under William Kaye, QC.

Deputy premier and police minister Sir Arthur Rylah initially resisted calls for an inquiry and when his hand was forced ensured it had limited powers.

Rylah felt indebted to the Homicide Squad which, he said, had shown him great compassion when in 1969 his wife, Lady Ann Rylah, died after being found unconscious in the back garden of her sprawling Kew home.

Homicide took control of the case and quickly found no suspicious circumstances. The cremation and funeral were held four days later. Rylah married his long-term mistress within months.

The Homicide head at the time was Detective Inspector Jack Ford.

I once asked a Homicide Squad member of that era about the case. He reflected for some time before saying it was handled by Ford’s best friend: “There was not much paperwork.”

The Kaye inquiry into abortion found a corrupt system of payments to some in the squad. Ford, his boss Superintendent Jack Mathews and former detective constable Martin Jacobson were jailed.

Not that Harding was black and white on every law. Stationed in the country he decided if local cops were to be part of the community they needed to be flexible. Before the days of betting on the phone there were illegal SP bookmakers in every pub and Harding set up his own local “laws”: “No cheating, betting with minors, no advertising, no betting with clients who had financial problems, if police external to the district raided you it was your bad luck, be nice to your clients and pay your taxes.”

Harding tried to avoid violence, but this didn’t mean he hid from confrontation.

When in 1972 two men, Edwin John Eastwood and Robert Clyde Boland, kidnapped teacher Mary Gibbs and her six pupils from the tiny Faraday Primary School, Harding kicked down the door to arrest Boland. 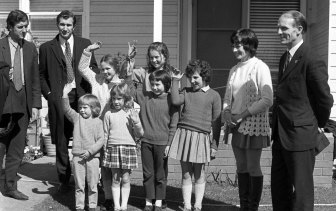 Victorian education minister Lindsay Thompson with Mary Gibbs and her six pupils after their rescue from kidnappers. Credit:The Age Archives

In 1985, when burglar Pavel Marinof shot six police, Harding raided his house. The following year, when Marinof was shot and killed by police, Harding delivered the death message.

What he despised was unnecessary confrontations, which once put him at loggerheads with then prime minister Malcolm Fraser.

In 1976 Fraser was invited to Monash University to open the Alexander Theatre. An angry mob of demonstrators overwhelmed the inadequate security and the PM was forced to escape in an unmarked police car. He vowed to return, doing so to make the inaugural Sir Robert Menzies Lecture just as Harding was transferred to the district. 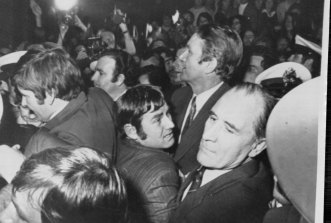 “When I arrived at Oakleigh I was hopeful that sanity would prevail and the Prime Minister would be distracted from his promise to return to Monash,” Harding writes. “That hope was dashed immediately.”

Harding put forward a number of safe exit strategies only to be told: “The Prime Minister does not leave by a back door.”

“At 9.45pm Prime Minister Fraser, and wife, emerged and on cue the waiting crowd surged. Punches and kicks were exchanged; police were pushed and tugged, spattered with mud and constantly abused. Fraser and wife were in the comparative safety of their car.

“Suddenly he emerged from the car, stood to his full height and gave the mob a prime ministerial wave and smile, then escaped back into the car. It was not helpful.”

Angry at the unnecessary provocation, Harding told The Age: “Mr Fraser could have left the university building by any one of a number of exits but chose to walk out the door surrounded by protesters. He failed to avoid the avoidable.

“We are left with the unhappy conclusion that he sought confrontation.”

Bryan Harding versus the prime minister in The Age, April 1978.Credit:Age archive

Vintage Harding. He always cared about the job but didn’t care about ruffling the feathers of the roosters, whether they were pedantic senior officers or preening politicians.

No, policeman, Said, the, to, who
Celebrities