This is the amazing in cockpit footage of the RAF Red Arrows performing a flyover down The Mall as part of Queen Elizabeth II’s Platinum Jubilee celebrations.

The nine ship formation is filmed from the back seat of one of the jets as the display team discharges red, white and blue smoke as the aircraft head towards Buckingham Palace.

The Queen and members of the Royal Family stood on the balcony as some 71 military aircraft – including the Battle of Britain Memorial Flight – entertained crowds along the route. 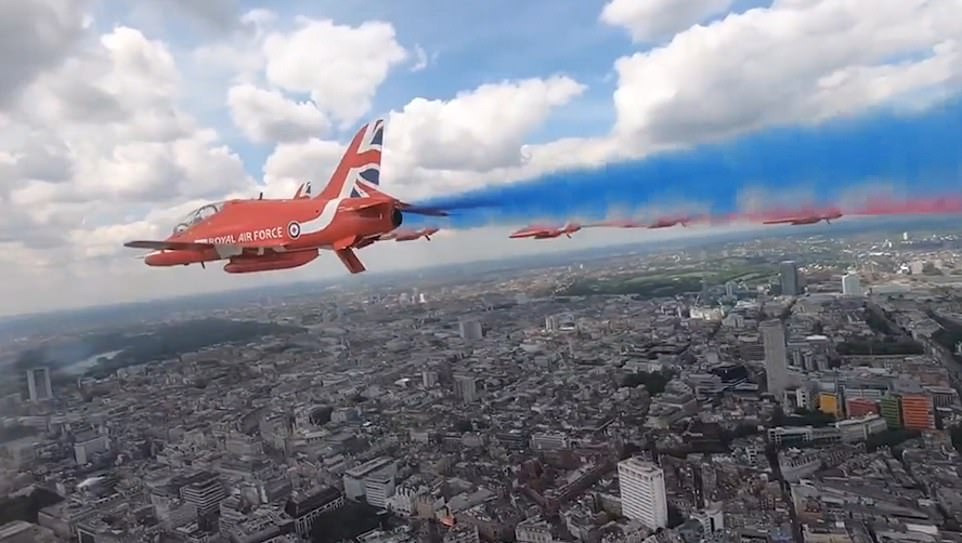 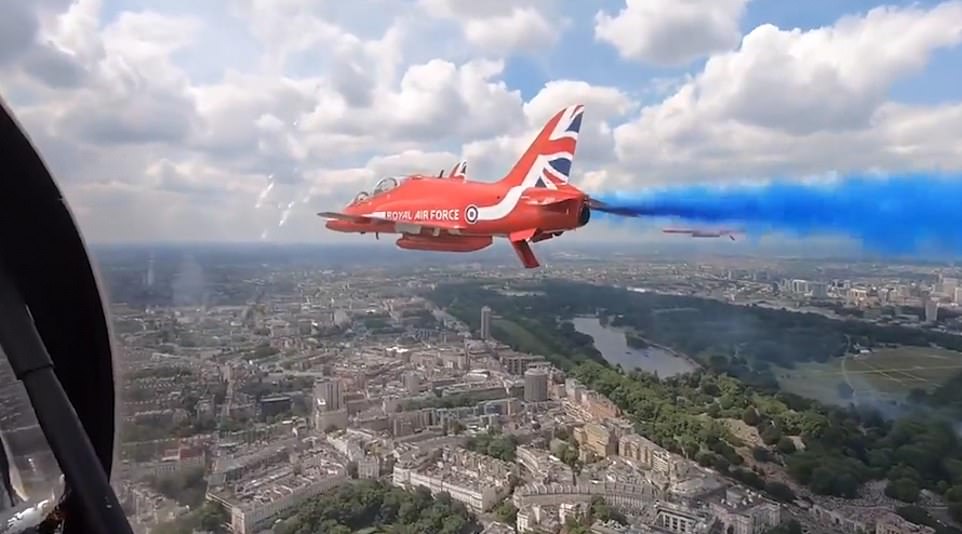 Some 71 aircraft from the RAF, Royal Navy and Army were involved in yesterday’s fly past 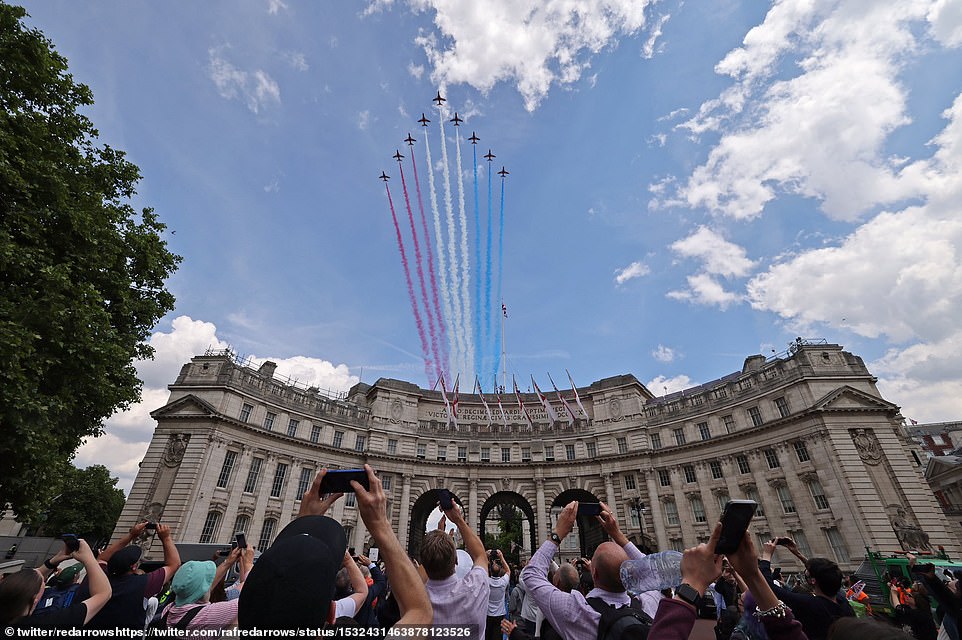 The RAF Red Arrows blasted over the streets of London trailing red, white and blue smoke 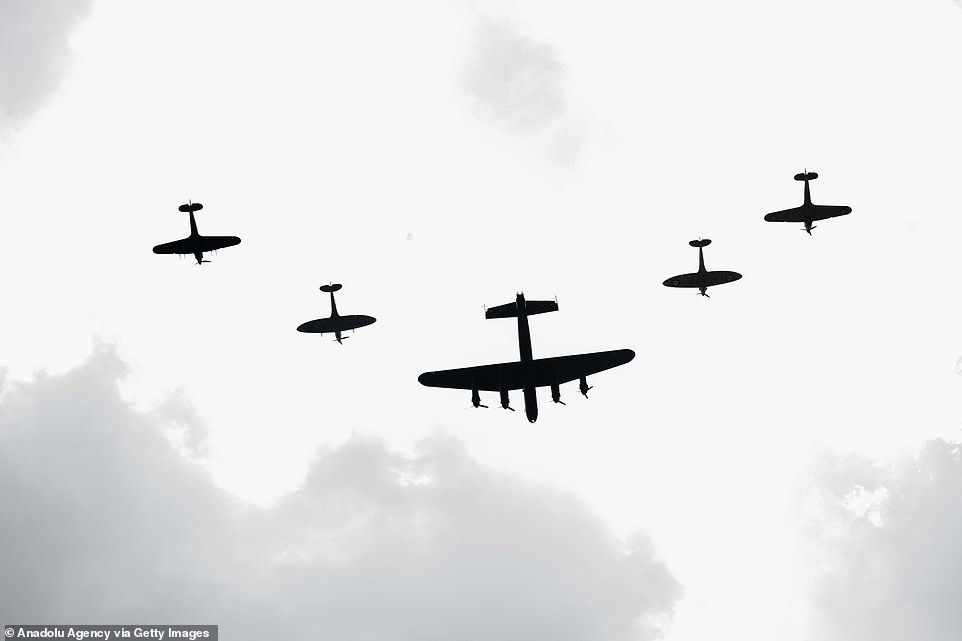 The Battle of Britain Memorial Flight sent a Lancaster bomber, centre, and Hurricanes and Spitfires to form part of the flypast 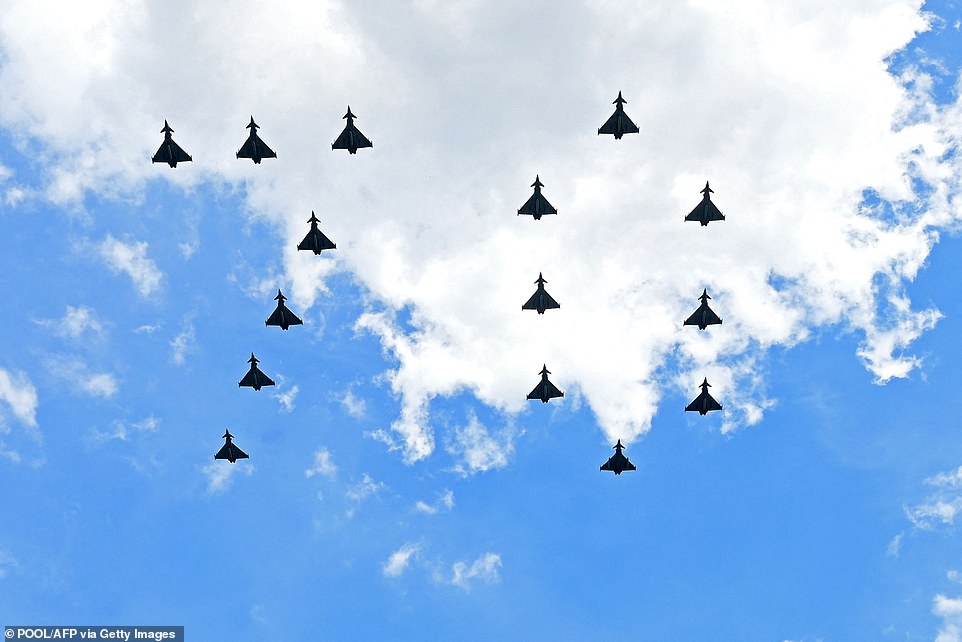 The famous red, white and blue smoke discharged by the Red Arrows is made by shooting diesel with a special dye into the BAE Systems T1 Hawk aircraft’s engine.

Yesterday’s fly past will be one of the only times this year the team will fly as a nine-ship formation. For most events this year they will have seven jets in the air.

In total, the Red Arrows are due to display at 65 events this season across Britain, with visits to France, Denmark, Ireland, Jersey and Guernsey.

As well as the Red Arrows, the Battle of Britain Memorial Flight had a Lancaster bomber, three Spitfires and a pair of Hurricanes involved in the flypast.

Also 15 RAF Typhoons flew past in formation marking out the number 70. 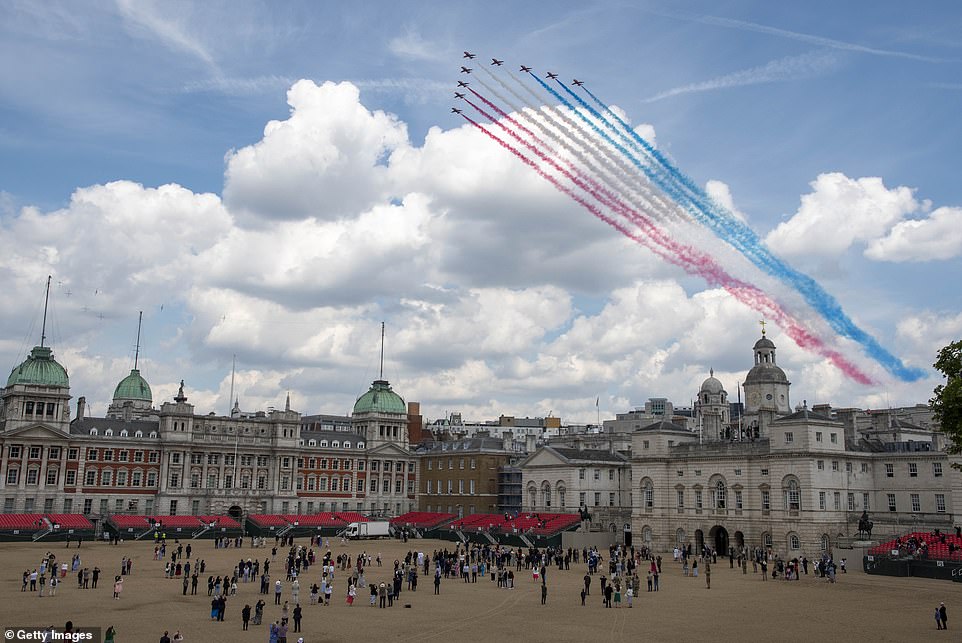 The Red Arrows, pictured, flew over Horse Guards Parade where Trooping of the Colour took place earlier in the day before returning to RAF Scampton 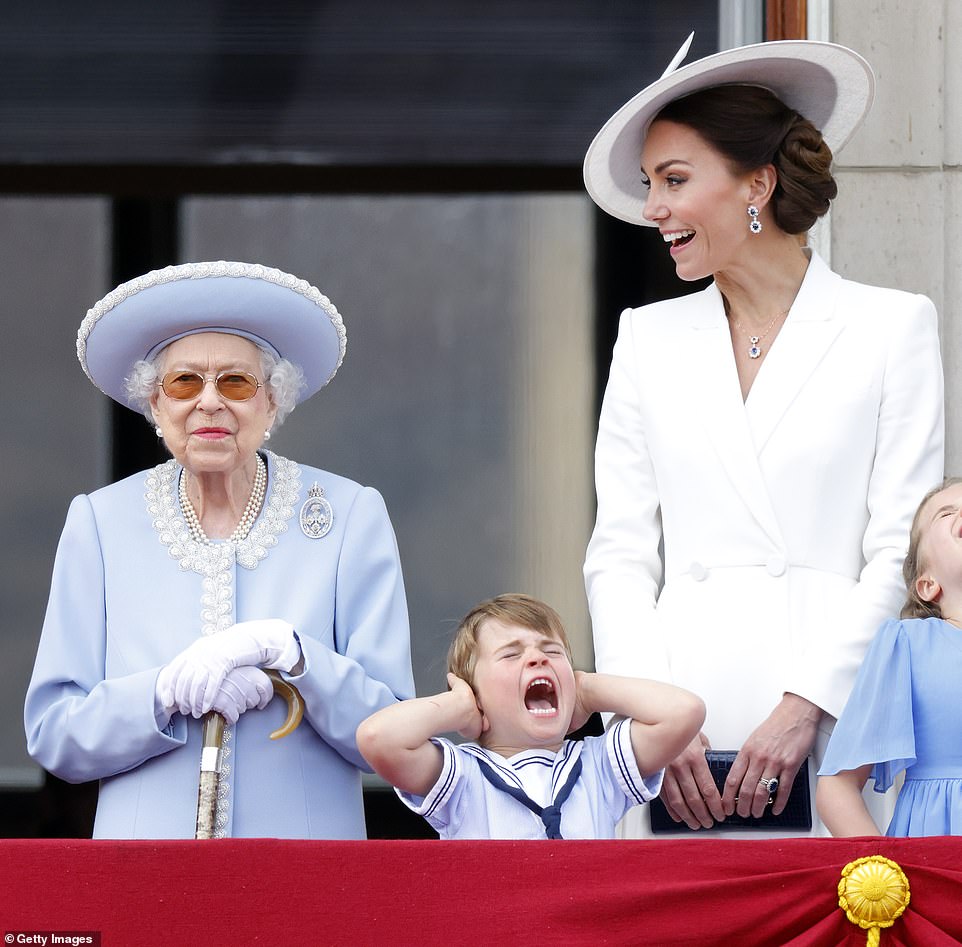 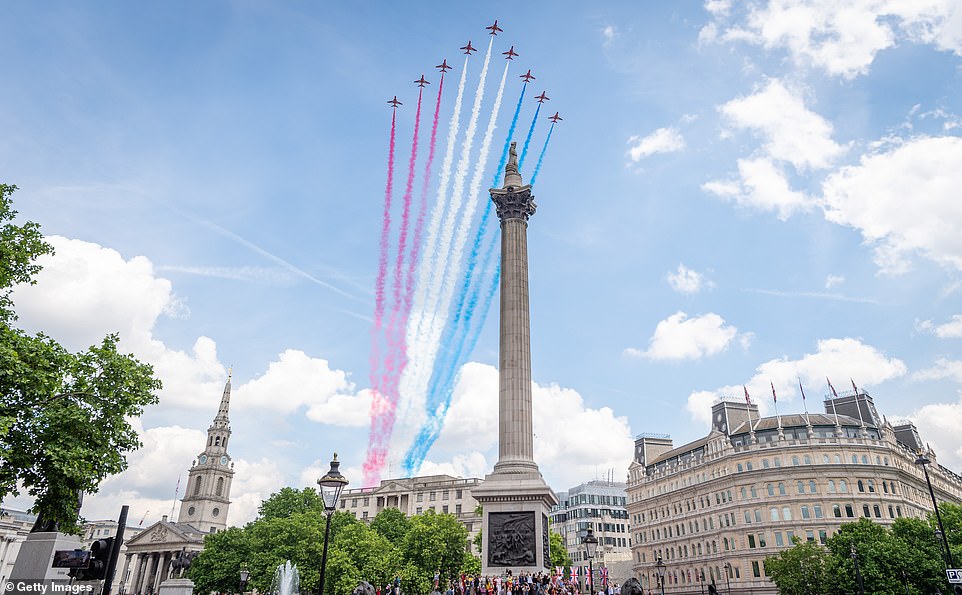 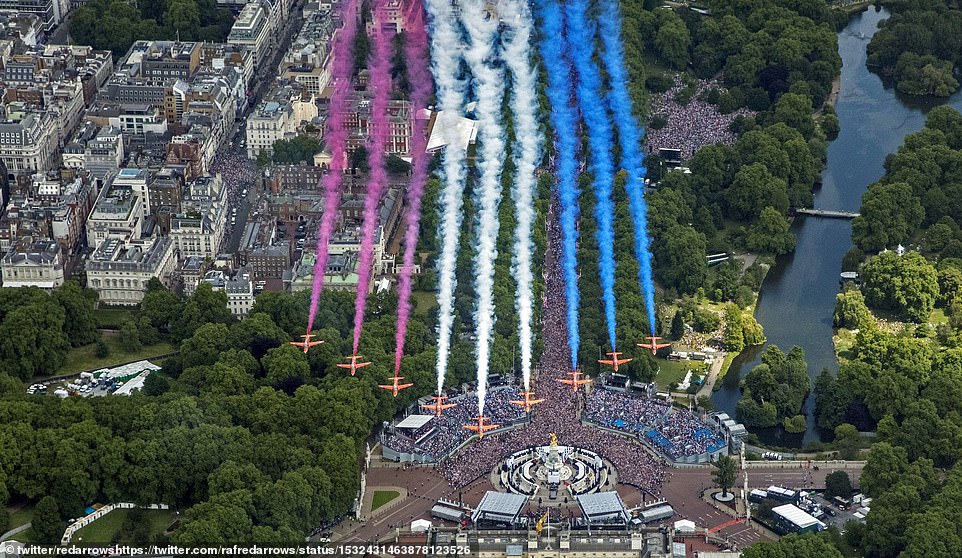 The Red Arrows, pictured, are due to display at 65 air shows this season, with trips to France, Ireland, Denmark, Jersey and Guernsey 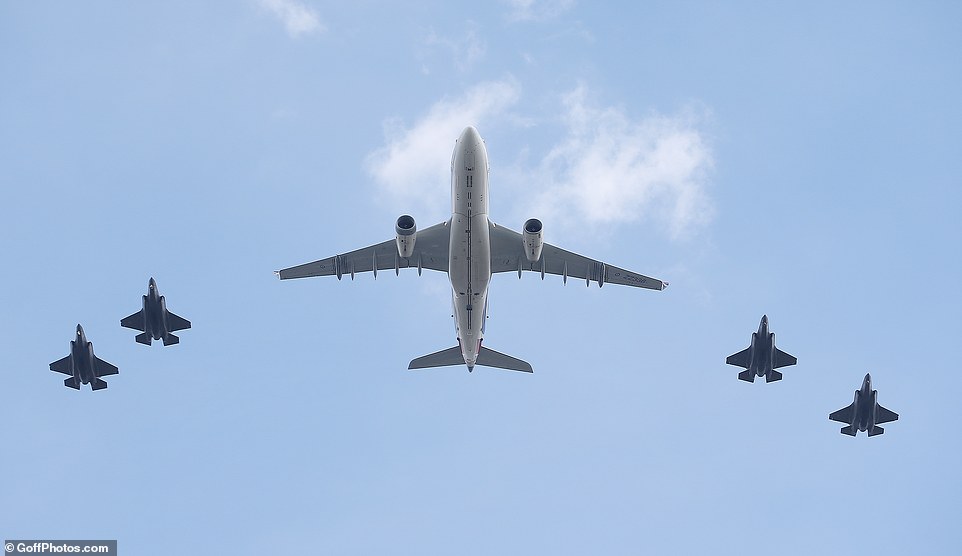 Even the RAF Voyager, centre, was involved in the flypast along with four F-35B Lightning jets