Promising vaccine trials sounded like “drumming hooves of the cavalry coming over the brow of the hill”, the British Prime Minister said last year. A reduction in cases at the end of winter was “the crocus of hope poking through the frost”. He has also praised vaccine researchers for performing “biological jiu-jitsu” to turn the virus on itself.

The former journalist now has a new favourite line: Britain’s world-leading inoculation program has built the medical equivalent of a “protective wall”. And by abolishing all remaining restrictions while infections surge, he is setting up a major test of how strong that wall really is. 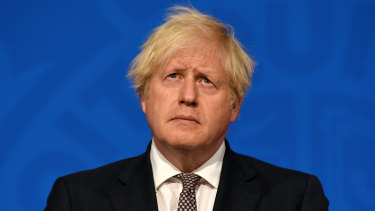 The removal of restrictions is not particularly unique and has occurred in plenty of other countries, including the United States.

But what makes Monday’s announcement so significant is that this will be the first time any major country tests what happens when unrestricted community transmission meets widespread vaccination coverage.

This is the long-term goal of most countries but Johnson is taking a gamble on giving it a go now over the northern summer instead of waiting for autumn and winter when the virus regains its advantage.

Nearly 86 per cent of all adults in the UK have received one dose and 64 per cent the maximum protection of two. The number of people catching the disease, getting sick and dying has fallen sharply this year.

But cases have been climbing in the UK for weeks now and even Johnson warns they could hit 50,000 a day by the middle of July – just short of the peak of 60,000 new daily cases during Britain’s devastating second wave over winter. Nearly all cases are the highly transmissible Delta variant.

So why back off now? Johnson has factored three calculations into this decision.

The first is confidence that the vaccines will do what they were designed to do: prevent the vast majority of serious disease and deaths, and have some reasonable impact on curbing transmission.

The second is that the public’s understanding of death has matured since last year. Many now realise the vaccines will not prevent every death from COVID-19 but are reassured they will stop the vast majority. There is also greater awareness of how many have died from missed cancer diagnoses or suicides stemming from lockdown.

Johnson’s third judgement is that the public’s appetite for enduring state reach into their lives is waning. While compliance with mask wearing has been strong for most of the pandemic, anyone who catches the tube will tell you adherence has been on the decline as more and more get their second dose. A growing number of Tory MPs are also unwilling to support the retention of current measures.

The risk is that transmission could become so widespread that the resulting number of hospitalisations puts huge pressure on the NHS. Another outbreak could spawn a new variant which might damage the level of protection offered by vaccines. Some experts believe the third wave will likely run out of new people to infect before this happens but others aren’t so sure.

Businesses and mayors – including London’s Sadiq Khan – may also opt to impose their own mask laws, which would leave Downing Street powerless to do anything about it and create a confusing and potentially divisive set of rules depending on where you happen to be.

The UK is now a test tube and the world will be watching. It’s in everyone’s interests for the experiment to work.