‘There are other ways’: Fauci raises doubts about COVID vaccine patent waiver push

Leading health experts have conflicting views on whether it is the right move to strip pharmaceutical companies of the intellectual property rights on COVID-19 vaccines.

While the World Health Organisation (WHO) welcomed the decision by the US on Wednesday to waive its IP rights – calling it a “watershed moment” – some scientists warn the move could backfire.

Dr Anthony Fauci, President Joe Biden’s chief medical adviser, has pushed back against the global calls, warning it may not be the best way to actually improve vaccine access. 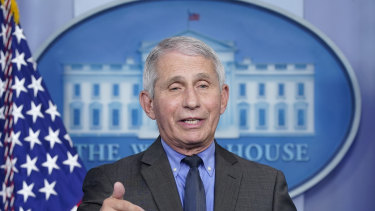 Dr Anthony Fauci, director of the National Institute of Allergy and Infectious Diseases.Credit:AP

In an interview this week Dr Fauci, the head of the US’s National Institute of Allergy and Infectious Diseases, said he was “agnostic” about the idea of waiving rights as it may not be “the fastest and most efficient way” of getting shots in arms.

“If you take too long, people are going to die,” he told the Financial Times. “There are other ways to ramp up vaccine production around the world.”

Dr Fauci suggested that companies in the West should instead be encouraged to increase production and export excess doses, and countries should also donate any surplus, as some, such as Norway and Sweden, have begun to do. 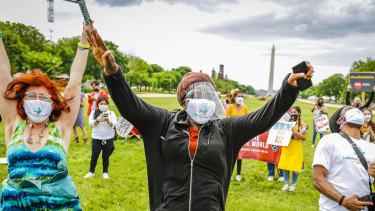 Supporters cheer after it’s announced that the United States will support the waiver at the Rally for Vaccine Access for Everyone, Everywhere in Washington, DC. Credit:AP

Many suggested that regardless of the effectiveness, such a decision would send a powerful message from richer countries and pharmaceutical firms that they are willing to forgo some profit for the greater good.

With Covax, the WHO-led vaccine-sharing programme, struggling to gain momentum because of vaccine shortages, pleas have been growing to do something about what rights groups term “vaccine apartheid”.

Wealthy countries have secured more than half of nearly nine billion doses locked up in purchase agreements to date. Developing countries that are most in need, such as virus-beleaguered India, meanwhile, have struggled to get their share. 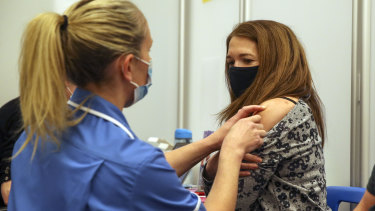 A woman receives an injection of the Moderna Covid-19 vaccine in Reading, England.Credit:Pool PA

The waiver, which would affect firms like Pfizer, Moderna, AstraZeneca and Johnson & Johnson, would give other companies across the world access to the information needed to make their own vaccines and remove legal barriers stopping them from doing so.

Advocates say this would enable more manufacturers across the globe to produce vaccines and help combat dwindling supply.

“Surely in this once in a hundred years moment of crisis, we can find it within us to forget about profits and think about humanity,” Dr Ayoade Alakija, co-chair of the Africa Union Vaccine Delivery Alliance.

“The argument has to be for these big pharma to release the formula so we can save lives across the world.”

But while Dr Fauci said he supports efforts to boost vaccine supply, he warned that a waiver could potentially end in a protracted legal battle as it needs to be agreed by the World Trade Organisation.

“Going back and forth, consuming time and lawyers in a legal argument about waivers – that is not the end game,” he said.

“People are dying around the world and we have to get vaccines into their arms in the fastest and most efficient way possible.”

While Biden’s backing adds political impetus to get a deal done, other countries with big pharmaceuticals sectors, including Britain, Japan, Switzerland and those in the European Union, are opposed to the waiver and have the ability to block the proposal.

“What this decision will do, if it goes forward, is benefit countries like China that are aggressively trying to obtain US technology to bolster their own domestic champions,” Republican Senator Mike Crapo said in a statement.

Pharmaceutical companies also strongly oppose any efforts to do away with intellectual property rights. Companies argue that without the money patents bring in there is little incentive for them to undertake the expensive task of developing and bringing drugs to market.

“This decision will remove the incentives and rewards for the innovators on who our very lives depend,” Amesh Adalja, an infectious diseases expert and senior scholar at the Johns Hopkins Centre for Health Security, said on Wednesday.

“If rights can be ‘waived’ away, they aren’t really rights. This is the wrong decision.”

Big companies also argue that they are already operating at full capacity and that they have already taught manufacturers in other countries how to make their vaccines.

While this so-called “tech transfer” has worked well during the pandemic so far, it uses up considerable resources.

Industry experts say companies may not be able to produce the drugs quickly even without patent protections, pointing to supply chain issues and the wider technological know-how that is not included with patents.

Thomas Cueni, the head of the pharmaceutical lobby group IFPMA, said at a panel recently that making vaccines isn’t like following a Mary Berry recipe. It is a far more complex process – and even if you do follow it recipe it does not always go to plan.

Following the US announcement the IFPMA added that the waiver is a distraction from the real challenges in scaling up production and distribution of vaccines globally: “namely elimination of trade barriers, addressing bottlenecks in supply chains and scarcity of raw materials and ingredients in the supply chain, and a willingness by rich countries to start sharing doses with poor countries”.

Meanwhile, countries like India, which is now battling the world’s worst outbreak of COVID and has only fully vaccinated two per cent of its 1.4 billion population, need help now. Even campaigners for the waiver admit that it will not mean vaccines will be available overnight.

“Arguably the strongest argument for a temporary waiver is that patents were never designed for use during global emergencies such as wars or pandemics,” wrote Nature magazine in a recent editorial.