Theresa May has declared that all sides must reduce tensions in the Iran crisis as she begins her swan song on the international stage, flying into Japan for her last G20 summit.

Pressure has increased sharply in the Persian Gulf over a recent spate of tanker attacks, while Iran is on the brink of breaching the JCPOA nuclear deal that America abrogated more than a year ago.

“What we need to see is a de-escalation of the tensions that we have seen in that region,” she told reporters. 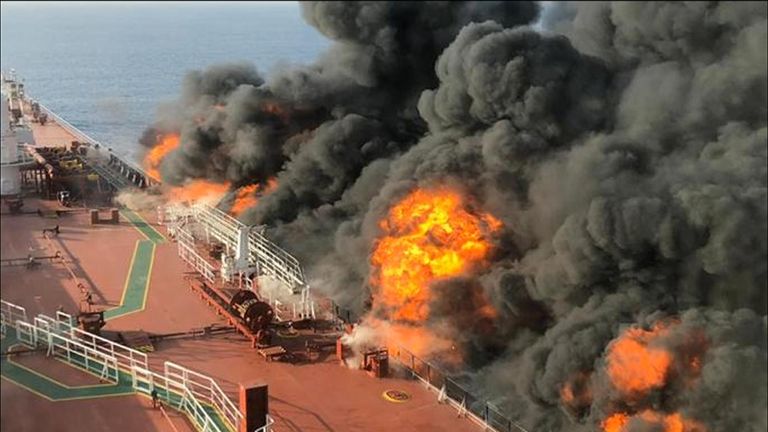 Mrs May is standing by the nuclear deal forged over years of negotiations between Iran, Russia, China and European partners.

The deal is in grave peril as America ratchets up sanctions on Iran and countries who buy its oil.

Aides say the prime minister wants to use the G20 summit to promote international cooperation and the institutions that underpin it.

On board the plane, she seemed determined and focused on the job in hand, and not in the mood for reflection in the final weeks of her time in office.

Her message is that together we can make the world safer and more prosperous, according to officials.

But in bilateral meetings she has chosen to sit down with two leaders who have done more than most to flout international rules.

She has surprised many by agreeing to meet Russian leader Vladimir Putin, who invaded Crimea, destabilised Ukraine, and sent agents to poison people in the UK.

Allies who expelled diplomats in solidarity with the UK over the poisoning may look askance at the prime minister meeting the Russian leader so soon before he has made amends over the Salisbury poisoning.

She will be meeting Mr Putin little more than a week after Dutch investigators named Russians as suspects in the downing of the MH17 passenger jet over Ukraine. British nationals were among those on board.

Mr Putin has shown no readiness to hand over the Russian suspects in this case or Salisbury.

She will also sit down with Saudi Arabia’s Crown Prince Mohammed bin Salman, who is widely believed by Western intelligence agencies and diplomats to have ordered the murder of journalist Jamal Khashoggi in his country’s consulate in Istanbul.

A recent investigation by a UN special rapporteur on human rights concluded the assassination was state sponsored and breached the Vienna Convention.

On the plane, Mrs May said she hoped in her meeting with Mr Putin to send a “very clear message, leader to leader” that a new relationship between the two countries was possible – but only if Russia changes its ways.