Therese Coffey 'was among those who physically manhandled' Tory MPs

The Deputy Prime Minister and at least one other Cabinet member were personally involved in ‘manhandling’ Conservative MPs through the lobby to vote against Labour’s motion to ban fracking, Labour MP Chris Bryant has said.

The vote turned into chaos after climate minister Graham Stuart caused confusion by telling the Commons as the debate ended: ‘Quite clearly this is not a confidence vote.’

This was in direct contradiction to earlier briefings, when Conservative whips initially stated the vote was being treated as a ‘confidence motion’ in Liz Truss’s embattled Government.

But when Conservative MP Ruth Edwards (Rushcliffe) asked to clarify if those Tories who abstain or vote against the motion will lose the party whip, Mr Stuart added: ‘That is a matter for party managers, and I am not a party manager.’

The Government defeated Labour’s bid to ban fracking amid farcical scenes in the House of Commons this evening.

Allegations of bullying were levelled against Government whips, with Labour former minister Chris Bryant saying some MPs had been ‘physically manhandled into another lobby and being bullied’.

He told Sky he had seen Conservative MP Alex Stafford being ‘manhandled’ through the lobby by a group of MPs which included Therese Coffey, Deputy Prime Minister, and Jacob Rees-Mogg.

But Mr Stafford later tweeted that ‘no-one pushes me around’ in a denial of Mr Bryant’s version of events. 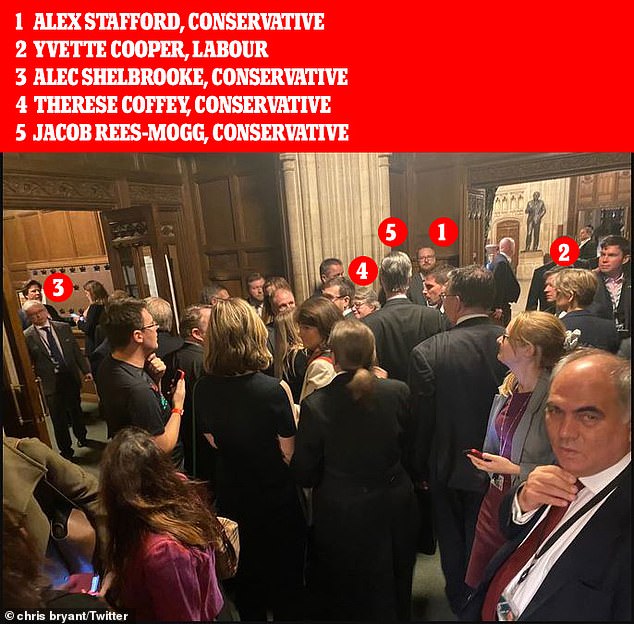 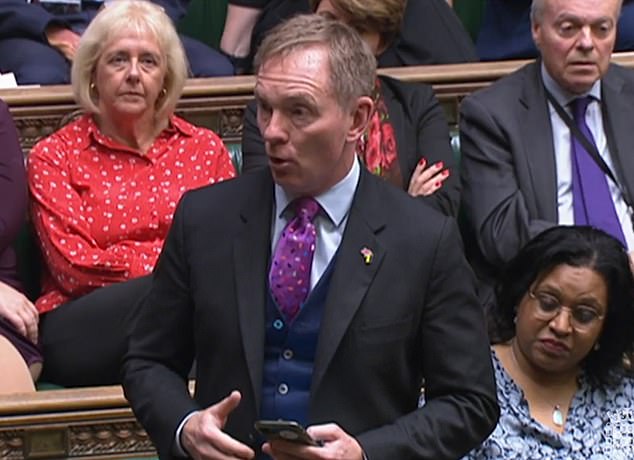 Chris Bryant speaks to the Deputy Speaker in the House of Commons, demanding an investigation into the goings-on within the lobby

Sources close to Deputy PM Therese Coffey have also denied that she was involved in any ‘manhandling’.

Jacob Rees-Mogg has also denied the claims, saying there was a ‘heated exchange’ but no bullying.

He said: ‘There were discussions going on, and there was a discussion about the vote that was taking place, and this was what normally goes on outside the division lobby.’

‘I heard one person swear and use an expletive… a Conservative, when going into the division lobby, swear and say, sort of, “get on with it”, but he wasn’t saying it to an individual.

‘I didn’t see any bullying and I saw nobody being manhandled.’

Mr Rees-Mogg said there had been ‘confusion’ after a ‘junior official’ from No 10 had relayed a message to the Government front bench that it was no longer a confidence vote.

‘Nobody else was aware of that. Most members thought it was a vote of confidence,’ he said.

Mr Bryant told the Speaker in the moments after the vote result was announced: ‘I would urge you to launch an investigation into the scenes outside the lobby earlier. As you know members are supposed to be able to vote without fear or favour.

‘And the behaviour code which is agreed by the whole of the house says there will never be bullying or harassment of members.

While Mr Bryant was speaking, several other Labour MPs sitting behind him could be heard alleging some of those forced through to vote by Conservatives were ‘crying’.

He added to Sky News: ‘In the area just as you go into the no lobby, which is where the Tory whips were gathered, the MPs were clearly uncertain whether they were allowed to vote with the Labour motion or against it because of what had been said in the chamber…

‘There was a group including several Cabinet members who were basically shouting at them and at least one member was physically pulled through the door into the voting lobby.

‘That is completely out of order in our system.

‘I have never ever seen a member physically manhandled through a division lobby.

‘The group all moved forward with the one member, and that person was, to my mind, he will have to speak for himself, he was to my mind physically manhandled into the lobby.’

He named the MP in question as Alexander Stafford, but Mr Stafford has since said on Twitter that ‘no-one pushes me around’.

Liz Truss is on record as having not voted tonight – after whips were threatening to remove the whip from any MP who didn’t vote against the motion.

He added he has photos of the scenes in the lobby which he will pass on to the Speaker and Deputy.

Mr Bryant also said that before MPs allegedly resorted to manhandling, there was ‘very aggressive’ pointing.

It was thought that both Chief Conservative Whip Wendy Morton and her deputy Craig Whittaker had quit their roles after the shambolic vote, after multiple sources said Ms Morton walked into the lobby area and said: ‘I’m no longer the Chief Whip’ before storming out, followed by Liz Truss.

Business Secretary Jacob Rees-Mogg was asked live on Sky News whether the Chief Whip remained in post, to which he said he did not know.

After more than two hours, No10 confirmed shortly before 10pm on Thursday that both the Chief Whip and Deputy remain in post.

One miserable Cabinet source told MailOnline: ‘At this rate I’m going to be PM by Christmas.

‘The writing was on the wall for Wendy since the day of her appointment.’

Business Secretary Jacob Rees-Mogg said he was ‘not entirely clear what the situation is with chief whip’.

Meanwhile Chris Walker, a Conservative MP of 17 years, told the BBC: ‘This whole affair is inexcusable. It is a pitiful reflection on the Conservative Party.’

When asked whether there is a way back for the government, Mr Walker said: ‘I don’t think so.’

He added: ‘This is an absolute disgrace.

‘I think it’s a shambles and a disgrace. I am livid.

‘I hope all those people who put Liz Truss in No.10 I hope it was worth it. […] Because the damage they have done to our party is extraordinary.’

But former Culture Secretary described Mr Bryant’s comments as ‘nonsense’, despite dozens of tweets from MPs in the lobby at the time which appear to back up his claims.

Earlier, Business Secretary Jacob Rees-Mogg sought to limit the rebellion by insisting communities will have a ‘veto’ on fracking in their area.

He said national government would be unable to overrule the objections from communities, with one option under consideration involving local referendums for areas where fracking is proposed.

‘Any process to determine local consent must be run independently and this House will vote on any scheme that we bring forward.’

Labour’s motion was defeated by 230 votes to 326, majority 96, but the Commons heard there were ‘very strong rumours’ the Government chief whip Wendy Morton had resigned.

Liz Truss’s government was in the grip of a wider massive meltdown tonight after Suella Braverman quit as home secretary just hours before the Chief Whip left too.

In yet another day of madness in Westminster Ms Braverman was removed for breaching protocol by sending an email from her personal account to a contact revealing details of an announcement on immigration policy.

It is unclear whether she resigned herself or was asked to by the Prime Minister.

But in another hammer blow for the PM’s chances of clinging on, she also complained that the government was breaking promises. She swiped that when people made ‘mistakes’ – something Ms Truss has admitted – the right thing to do was quit.

Ms Truss responded with a much briefer letter saying it is ‘important the Ministerial Code is upheld’ and quickly installed Grant Shapps – a Rishi Sunak supporter – as a replacement.

But the feeling of a rudderless government later deepened in the Commons. In another sign of evaporating Government control, 40 MPs refused to back the government in a vote over fracking.