Home » World News » ‘They are killing people, it will never be forgiven’: Zelensky says Russia turned cities into targets

‘They are killing people, it will never be forgiven’: Zelensky says Russia turned cities into targets

Kyiv/Mariupol: Ukrainian forces battled Russian invaders on three sides after Moscow mounted an assault by land, sea and air in the biggest attack on a European state since World War II.

He called them “heroes” in a video address released in which he also said hundreds more have been wounded. 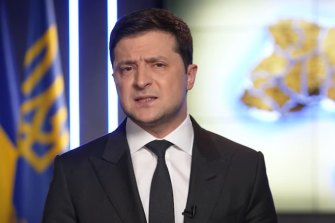 We want peace but will fight: Ukrainian President Volodymyr Zelensky.

Zelensky said that despite Russia’s claim it was attacking only military targets, civilian sites also have been struck.

In his words: “They’re killing people and turning peaceful cities into military targets. It’s foul and will never be forgiven.”

The President said all border guards on Zmiinyi island in the Odesa region were killed on Thursday. Ukraine’s border guard service earlier in the day reported that the island was taken.

Zelensky signed a decree on the general mobilisation of the population, the Interfax Ukraine news agency said. Conscripts and reservists will be called up over the next 90 days to “ensure the defence of the state, maintaining combat and mobilisation readiness,” an entry on the Ukrainian presidency’s website said.

He earlier called on Ukrainians to defend their country and said arms would be given to anyone prepared to fight.

After Russian President Vladimir Putin declared war in a pre-dawn televised address on Thursday, explosions and gunfire were heard throughout the morning in Kyiv, a city of 3 million people. 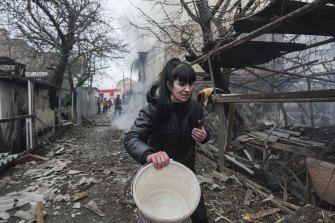 A woman walks past the debris in the aftermath of Russian shelling, in Mariupol, Ukraine.Credit:AP

Missiles rained down on Ukrainian targets and authorities reported columns of troops pouring across Ukraine’s borders from Russia and Belarus to the north and east, and landing on the southern coasts from the Black Sea and Azov Sea.

The assault brought a calamitous end to weeks of fruitless diplomatic efforts by Western leaders to avert war.

An adviser to the Ukrainian presidential office said Russian forces had captured the Chernobyl nuclear power plant, just 90 km north of the capital.

Just before midnight, Kyiv time, an adviser to the Ukrainian presidential office said government forces had recaptured Hostomel airport in the Kyiv region, as a pitched battle was waged for the strategic location and Russian helicopters were seen in the skies.

After a day of fighting, Putin told business people in Moscow he had no choice but to act, while Western leaders condemned the Russian leader and promised sweeping economic sanctions.

Speaking to Parliament, Johnson said Putin would be condemned by the world and by history for his invasion, never able to cleanse the “blood of Ukraine” from his hands. “This hideous and barbarous venture of Vladimir Putin must end in failure,” he told parliament when announcing the new sanctions.

“For our part today the UK is announcing the largest and most severe package of economic sanctions that Russia has ever seen.”

Russia’s Defence Ministry said it had destroyed 83 land-based Ukrainian targets and had achieved all its goals, according to Interfax news agency.

Heavy exchanges of fire were also reported in the regions of Sumy and Kharkiv in the northeast and Kherson in the south.

The highway heading west out of Kyiv was choked with traffic across five lanes as residents fled, fearful of bombardments while stuck in their cars. 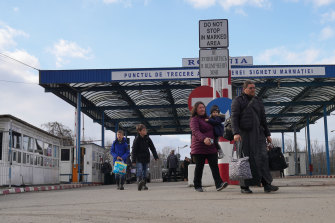 People enter Romania after crossing from Ukraine into Sighetu Marmatiei.Credit:Getty

“What we have heard today are not just missile blasts, fighting and the rumble of aircraft. This is the sound of a new Iron Curtain, which has come down and is closing Russia off from the civilised world,” Zelensky said on Thursday.

Leaders of the 27-nation bloc lambasted Putin, one by one, as they arrived for an emergency summit in Brussels, with Latvian Prime Minister Krisjanis Karins describing him as “a deluded autocrat creating misery for millions”. The EU will freeze Russian assets in the bloc, halting banks’ access to European financial markets as part of what its foreign policy chief, Josep Borrell, described as “the harshest package of sanctions we have ever implemented”. Leaders said it was a “barbaric” invasion.

It will also target Russia’s trade, energy and transport, among other sectors, and impose export controls.

But a sense of powerlessness to stop a war that Western leaders had seen coming could be felt even before the summit began.

“We were not successful enough, not decisive enough, to prevent Russia from this step, which is a tragedy for Ukraine, a tragedy for Europe and a tragedy for Russia itself,” said Lithuanian President Gitanas Nauseda.

There are differences within the EU over how far to go with sanctions, with countries that would face the harshest economic backlash keen to keep the most severe steps in reserve.

The details of the sanctions – including whether anything had been agreed on the SWIFT global interbank payments system – were not immediately known.

Ukraine and the EU’s ex-Soviet Baltic states say Russia should be cut off from the system, but German Chancellor Olaf Scholz, when asked about SWIFT, said: “We need to keep sanctions ready for later times.”

US President Joe Biden also said the United States would not restrict access to SWIFT for now.

An EU diplomat said Italy, Germany and Cyprus had been among those that preferred a step-by-step approach, while Central European and Baltic states – those closest to Russia – wanted a harder stance.

“We support the most serious package of sanctions against Russia,” Slovenian Prime Minister Janez Jansa said, wearing a tie with the Ukrainian flag’s yellow and blue colours. “Russia needs to feel that the price of aggression is significant.” 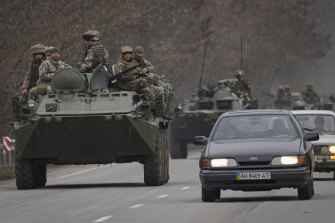 Ukrainian servicemen sit atop armored personnel carriers driving on a road in the Donetsk region.Credit:AP

Russia’s invasion of Ukraine by land, air and sea threatens to disrupt exports of commodities such as grains and oilseeds from both countries, while the prospect of toughened sanctions against Russia could disrupt energy and metals supplies.

Oil prices broke above $US100 a barrel on for the first time since 2014 and stock markets slumped globally on Thursday while Russia’s rouble hit a record low as the US dollar rallied after the invasion.

MSCI’s gauge of stocks across the globe was last down 2.1 per cent after touching its lowest level since March 2021. Europe’s stock markets tumbled with the STOXX 600 index falling more than 4 per cent, to its lowest since May 2021. It finished down more than 3 per cent.

Russia launched a wide-ranging attack on Ukraine on Thursday, hitting cities and bases with airstrikes or shelling, as civilians piled into trains and cars to flee.

Ukraine’s government pleaded for help as it said Russian tanks and troops rolled across the border in a “full-scale war” that could rewrite the geopolitical order.

Putin ignored global condemnation and cascading new sanctions as he unleashed Moscow’s most aggressive action since the 1979 Soviet invasion of Afghanistan, and chillingly referred to his country’s nuclear arsenal. He threatened any foreign country trying to interfere with “consequences you have never seen.”

Ukrainian officials said their forces were battling Russians on a series of fronts.

“Russia has embarked on a path of evil, but Ukraine is defending itself and won’t give up its freedom,” Zelensky tweeted on Thursday.

Later, he offered Russia an end to the hostilities.

“It wasn’t Ukraine that chose the path of war, but Ukraine is offering to go back to the path of peace,” he said.

Russian and Ukrainian authorities made competing claims about damage they had inflicted. Russia’s Defence Ministry said it had destroyed scores of Ukrainian air bases, military facilities and drones, and confirmed the loss of a Su-25 attack jet, blaming it on “pilot error.” It said it was not targeting cities, but using precision weapons and claimed that “there is no threat to civilian population.”