Thieves have stolen a vial containing several drops of Pope John Paul II’s blood from a church in central Italy.

The vial was part of a relic, one of several containing the late-pontiff’s blood, that had been stored in the chapel of Spoleto Cathedral, around 60 miles north of Rome.

But on Wednesday evening the cathedral’s sacristan, who is in charge of protecting the building an its contents, discovered it was missing. 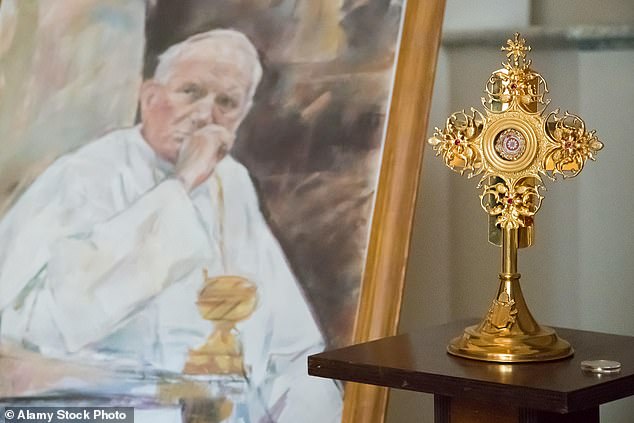 A golden relic containing a vial of Pope John Paul II’s blood has been stolen from a church in Spoleto, Italy, where it was kept in the chapel (file image of a similar relic)

The cathedral called police, who have now launched an investigation to try and find the culprits, Repubblica reported.

Investigators are reviewing CCTV from inside the building, but have not yet identified a suspect.

Meanwhile Renato Boccardo, archbishop of the cathedral, put out an appeal for the thieves to return the relic.

‘I dare to hope that it’s a shallow act that was not intended to offend the sensibilities of the faithful,’ he said.

‘I also dare to hope that this rash act wasn’t done to make money.’

The vial was given to the church in 2016 by Cardinal Stanislaw Dziwisz, then archbishop of Krakow, who was a longtime aide to the Polish pope who died in 2005. The relic is one of several containing the blood of Pope John Paul II, which are housed in churches around the globe

The relic in which it sits was due to be placed in the church of Saint Nicolò in Spoleto, which is currently under construction.

It was being kept inside a chapel alongside the Cross of Alberto Sotio, which was created in 1187.

The chapel was secured by a locked gate that stands about 3ft off the ground, and is not open to visitors.

It also contains an alarm system which protects the cross, though the relic was not protected, allowing the thieves to get away undetected.