Three children are clinging to life at Royal Hobart Hospital after the Tasmanian jumping castle tragedy, which has claimed the lives of five students, as details emerge about how it happened.

Family members said the jumping castle deflated after hitting a tree when wind swept it 10 metres into the air, causing nine children to fall to the ground, and that three children in intensive care are “in a bad way”.

The children had been playing in the jumping castle at an end-of year party at Hillcrest Primary School in Devonport, in northern Tasmania, on Thursday.

Zane’s mother Georgina Gardam visited the school on Saturday with her son’s PlayStation controller and school shirt in hand.

She described Zane as “loud and proud” and a “gamer extraordinaire”. Ms Gardam said, “I over-spoiled him, but I’m glad I did”.

“It’s going to be hard because I have all these Christmas presents and we’ve opened some of them and just set them up for him.”

Zane’s grandfather, Richard Gardam, clutched his grandson’s pillow. “He was a fun-loving kid, he loved animals,” he said. “I’m missing him terribly.

Elements of the tragedy, including whether the jumping castle was tethered down or not at the time the large gust of wind struck, will form part of the police investigation, Tasmanian Police Commissioner Darren Hine said.

Some of those injured were in enclosed plastic “zorb” balls when the incident occurred, he said, but most were on the jumping castle at the time. Around 40 students were at the campus on Thursday.

Jalailah’s mother Rhianna Goodson described her daughter as a beautiful and “really one of a kind”.

The family of another schoolboy injured in the tragedy on Saturday pleaded with Prime Minister Scott Morrison to let the nation’s best neurosurgeon treat their child.

Hillcrest Primary School student Chace, 12, described by his family as a keen basketballer and a fighter, received serious head injuries and was taken to Royal Hobart Hospital, where he remains in critical condition.

He is one of nine children taken to hospital with serious injuries following the incident. Five have since died. Three, including Chace, remain in intensive care and one has been discharged and is recovering at home.

Karen Wallace, a relative of Chace, said his parents had given her permission to ask Mr Morrison to send the best brain surgeon in the country to Hobart.

She said the entire family was struggling to deal with the tragedy. “You just don’t want to do Christmas even though these [kids] have a right to do Christmas,” Ms Wallace said, referring to Chace’s cousins. 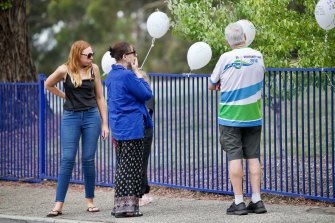 Relatives of 12-year-old Chace, who was injured during the Hillcrest Primary School tragedy, read the messages of support left behind by the community.Credit:Marta Pascual Juanola

Mr Morrison and his wife Jenny flew in from Hobart on Saturday afternoon to visit the roadside memorial at the school and pay their respects to the families of the victims.

The crowd of mourners, which had been cleared by Mr Morrison’s security detail ahead of his arrival, stood eerily quiet on the other side of Lawrence Drive as the Prime Minister laid down a bouquet and knelt for a minute of silence.

“In loving memory of these beautiful children who are no longer with us. Our hearts break for the families and the community left behind. Thinking of you all. With love and sympathy, Jen, Scott, (and their daughters) Abbey and Lilly,” a handwritten note accompanying the bouquet read.

Mr and Mrs Morrison, who were joined by local Liberal MP Gavin Pearce and his family, were visibly upset as they read the messages left behind by the local community.

They were among hundreds of mourners who visited Hillcrest Primary School on Saturday morning, laying flowers on the lawn and tying white balloons inscribed with heartfelt, handwritten messages to the school’s fence.

Locals poured into the school to honour the children for the third day in a row. Some prayed by the makeshift memorial, others embraced strangers as tears streamed down their faces.

Chaplains and counsellors gave solace to those in need of support and offered hot drinks and biscuits to mourners. 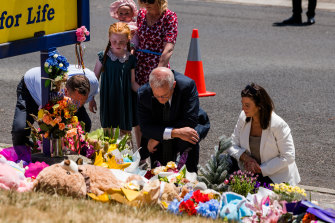 Prime Minister Scott Morrison and his wife a Jenny Morrison pay their respects to the students killed in the tragedy.Credit:James Brickwood

What started as a dozen tributes on Thursday evening turned into a colourful sea of cars, soft toys and petals remembering the “beautiful Hilly kids” and “little angels”, and sending strength and love to their grieving families.

In a touching tribute, Hillcrest sports teacher Jayden Wicks left a handwritten message on a basketball nestled among the flowers.

“Thank you for being part of my first-ever teaching gig. You guys made teaching fun,” the tribute read. “I wish nothing but the best for your families.”

The circumstances of the tragedy, which has been described by locals as the darkest event the town has seen since the massacre of Port Arthur in 1996, are being investigated by WorkSafe and Tasmanian Police.

Jumping castles have been banned on Tasmanian state schools until the results of the probe are released.

The Commonwealth has offered any medical support and resources necessary to the Tasmanian government in the wake of tragedy.

Tasmanian Education Minister Sarah Courtney said she would do “everything in my power” to provide answers for the families involved in the tragedy, but the immediate priority was to support those involved, including teachers and first responders.

“There will be time to understand exactly what happened,” a teary Ms Courtney said after putting down a bouquet of native flowers.

“I can understand the need of families [to get answers] but our highest priority at the moment is supporting those individuals, those families and those young people who witnessed this tragedy.”

She said it would be a long road to recovery.