Three-quarters of Britons believe that 2021 will be a better year than 2020, a new poll has found.

Despite the optimism, Ipsos Mori research also found that 43 per cent of Britons are worried that financial markets will crash as the world continues to battle

The poll found that seven in ten people said 2020 was bad for them and their families, while a stunning 96 per cent said the year had been a bad one for Britain.

However, the newly found coronavirus vaccine gave a boost to some, with the overall outlook for 2021 the most optimistic seen in any of the last seven years.

The survey questioned 1,000 adults and compared attitudes in Britain with 30 other countries. 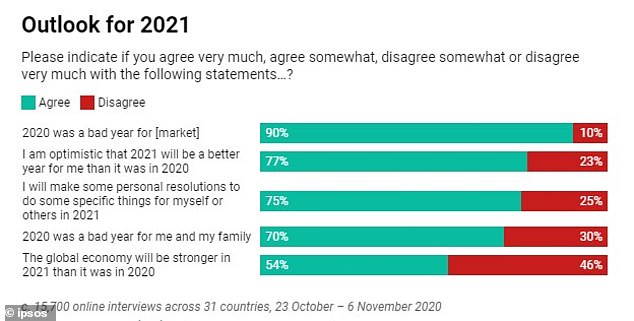 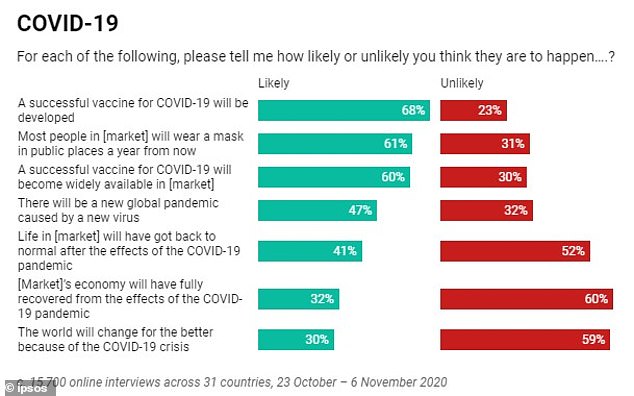 Ipsos Mori’s Sarah Castell said: ‘After a very tough year, the majority of people globally are optimistic that 2021 will be better.

‘However, the predictions reveal warnings about the future, in areas like the economy, in climate change, our mental health and income inequality.’

Among those warnings, just 32 per cent believe that life in Britain will return to normal in 2021 and just over a tenth  think the economy will recover.

A third also fear there will be another pandemic from a new virus.

Two-thirds of people in Britain say it is unlikely the economy will recover in 2021 – which is the most pessimistic outlook of 31 nations surveyed.

It comes after experts warned unemployment will surge to 7.5 per cent, putting 2.6million people out of work, when the furlough scheme ends in the spring.

The Office for Budget Responsibility said that the tens of billions spent on the job retention scheme and billions more spent on business loans and grants had fended off a catastrophe this year.

But it warned of a potential cliff edge when they come to an end in the spring, with the Chancellor in his spending review today offering no suggestion that the schemes would be extended.

UK unemployment is currently 4.8 per cent and the OBR forecast suggests it will take until the latter half of the decade to bounce back to pre-pandemic levels – at the earliest.

The coronavirus pandemic led to temporary shop closures, social distancing and dwindling tourist numbers, which all weighed on UK towns and cities.

A raft of retailers cut jobs, closed stores and secured restructuring deals to survive. However, for some companies, none of these measures were sufficient to preserve their place on the high street.

Lots of famous retailers are currently in administration with the fate of their bricks and mortar stores unclear.

Are, Britons, of, Three-quarters
Celebrities