AN undercover TV researcher who worked on Channel 4's Dispatches has been found guilty of torturing a father-of-two to death in front of his children at a cannabis farm in 2003. 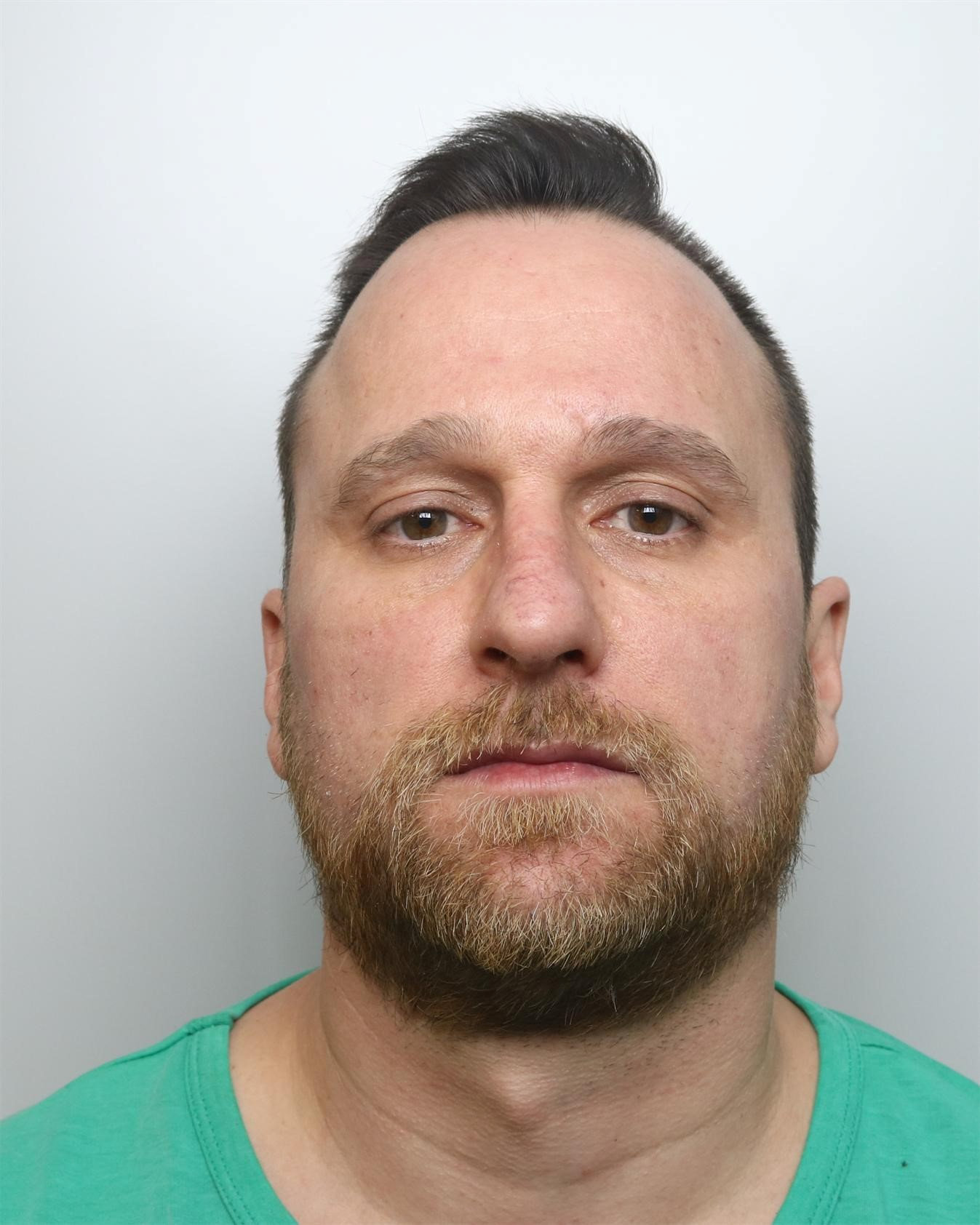 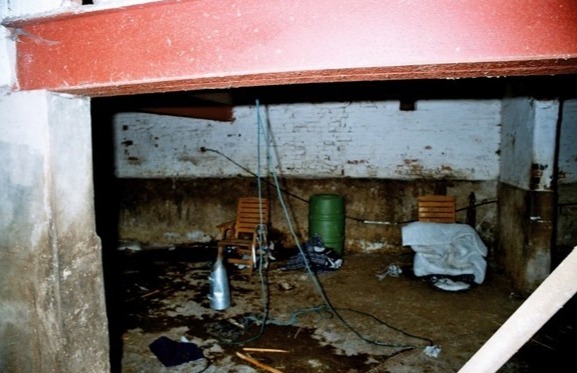 The 43-year-old was once one of Europe's most wanted men – and has now been convicted of Mr Waters' murder by a jury following a month-long retrial.

He shook his head as the verdict was delivered after jurors deliberated for 12 hours and 14 minutes before reaching a majority of 10 to two.

Justice Peter Openshaw, who had given a direction for a majority, will pass the sentence tomorrow.

The court heard he was hung upside down by his ankles, beaten with weapons and burned with melting plastic in front of his own children over a £20,000 drug debt.

A Home Office post-mortem investigation recorded a cause of death of multiple injuries – including fractured ribs, a broken nose and breastbone, a bleed on the brain and bruising to the heart.

He was also beaten with bamboo canes with such ferocity that they snapped, as well as being struck with a metal bar.

Police photographs from the scene show a chair with ligatures still attached to one of its arms.

Evidence also shows a green barrel which was filled with dirty water and used to submerge Mr Waters' head under – while he was hanged by his feet from the ceiling by a blue rope.

More remained at large for nearly two decades before his capture two years ago, having been added to Europe's most wanted list.

He was also found guilty of conspiracy to cause grievous bodily harm to a second worker at the drugs farm by jurors.

The defendant, who was 25 at the time, was part of a gang who travelled to the site in the early hours and ransacked the grow before torturing Suleman Razak, who worked at the cannabis farm.

Mr Razak was punched and kicked in the face numerous times and knocked unconscious before being hung upside down by his ankles and lowered into a barrel which was filled up with water.

After being electrocuted, he was burned with acid, had a pillowcase placed over his head and set on fire and was attacked with a staple gun.

It was then that Mr Waters arrived at the scene and was similarly set upon, the court heard.

A bin bag was also suspended above his head and set alight, causing melting plastic to drip down onto his head. 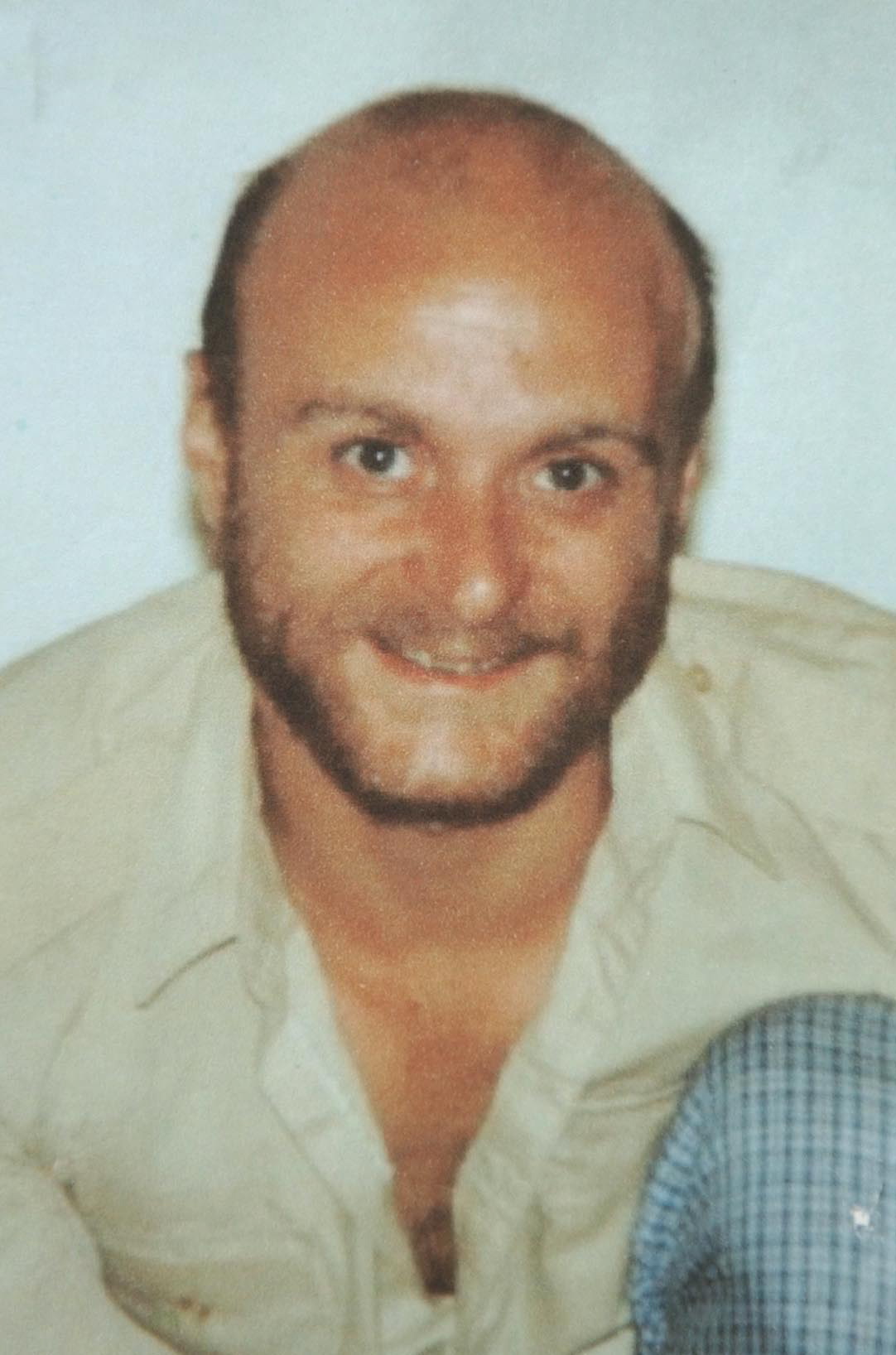 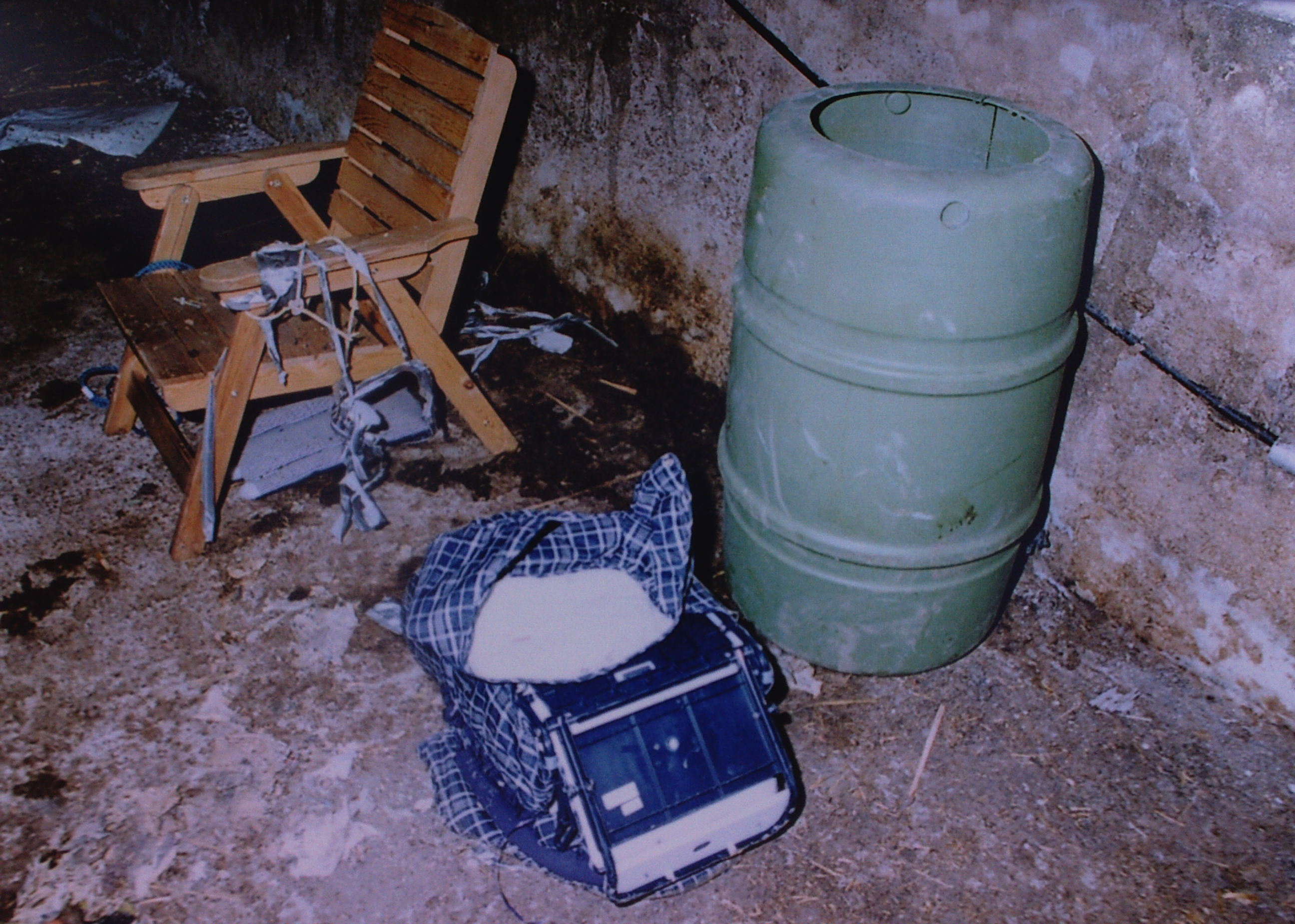 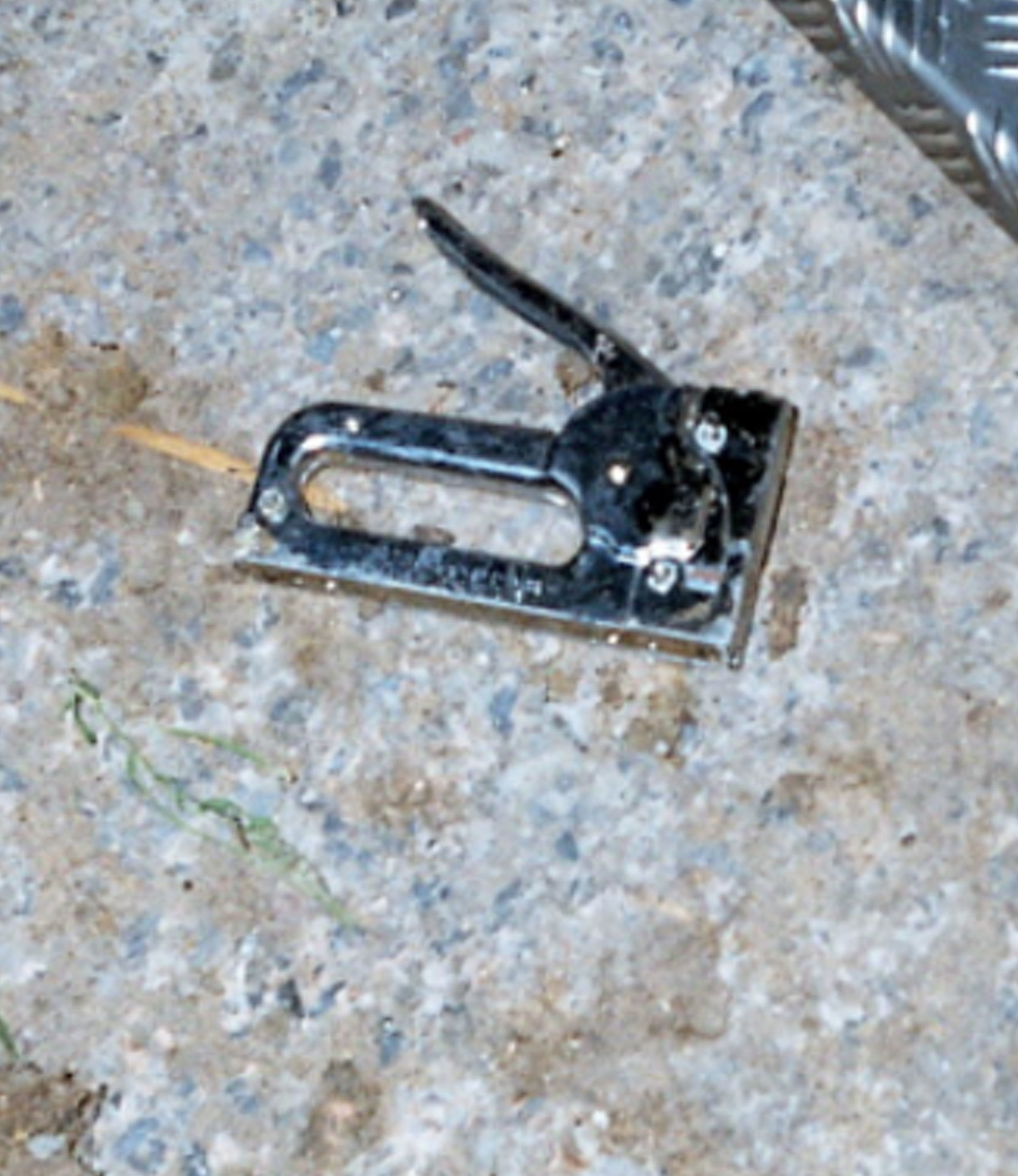 His son Gavin and daughter Natalie, who had celebrated her 21st birthday the previous day, then attended and were attacked.

Natalie had the barrel of a gun placed in her mouth, the court heard.

They were tied up and forced to watch as their father was murdered by his attackers, who tied a bin bag over his head and set it alight, causing it to melt.

At the same time, the Waters' family home in Nantwich, Cheshire, was raided by two men who then transported the victim's wife Julie to the farm.

But the assailants fled when the police arrived simultaneously, with officers discovering Brian Waters' lifeless body in a milking parlour.

Evidence of strangulation was found in the post-mortem, while he had suffered burns to his back from a 'caustic substance' and had been attacked using the staple gun across his head and body.

Several items discovered at the scene – including a bottle of Sprite, cigarette ends, a glove and human waste – revealed forensic links to More.

He returned his then home at Burford Lane Farm alongside co-conspirator Otis Matthews in the evening after the killing and flew to Malaga from Liverpool John Lennon Airport two days later.

More was wanted for more than 15 years before being detained in an apartment in Malta on a European arrest warrant in 2019, claiming to be called Andrew Christopher Lamb and possessing false documentation including a British passport in this name.

In early 2020, the former undercover TV researcher was extradited back to the UK and pleaded not guilty to murder as well as conspiracy to cause grievous bodily harm to Mr Razak.

A jury in a previous trial held at the same court earlier this year then failed to reach a verdict.

More admitted having been present while associates of gangster John Wilson stole the cannabis and cultivating equipment in the hours leading up to the killing but claimed to have left the farm before the violence unfolded.

He also denied any prior knowledge of a plot to attack either Mr Waters or Mr Razak.

Three other conspirators – Wilson, and Matthews and More's cousin James Raven – were previously convicted of Mr Waters' murder following trials in 2004 and 2007 and were jailed for life.

A statement read by Mr Waters family, issued after the verdict, read: "We are delighted with the guilty verdict and pleased that Christopher Guest More Jr is finally facing justice for his part in the horrific murder of a loving husband and father.

"We would like to thank detectives from Cheshire Constabulary, the prosecution team and everyone else involved in the case for all of their hard work and tireless and extensive investigations, which now span more than 18 years.

"We would also like to extend our thanks to the Family Liaison Officers for their help, advice and support over the years.

"What happened at Burnt House Farm on 19 June 2003 has had a significant and long-lasting effect on our family.

"We will never be able to forget events of that day and, even now, more than 18 years down the line, we feel the pain on a daily basis with constant flashbacks.

"We have remained a close-knit family and have provided much-needed support to each other – but this has been an isolating experience for us and not only have we lived in fear of reprisals we have also struggled to trust others as we normally would.

"It's similar to the feelings people have experienced in the current COVID crisis – not being able to leave their home and having to stay inside to feel safe.

"We have been living like that for more than 18 years.

"But we never gave up hope and the verdict today marks the end of an incredibly painful journey in our lives.

"We would now ask that our privacy is respected and we are left alone as a family as we try and move forward with the next chapter of our lives." 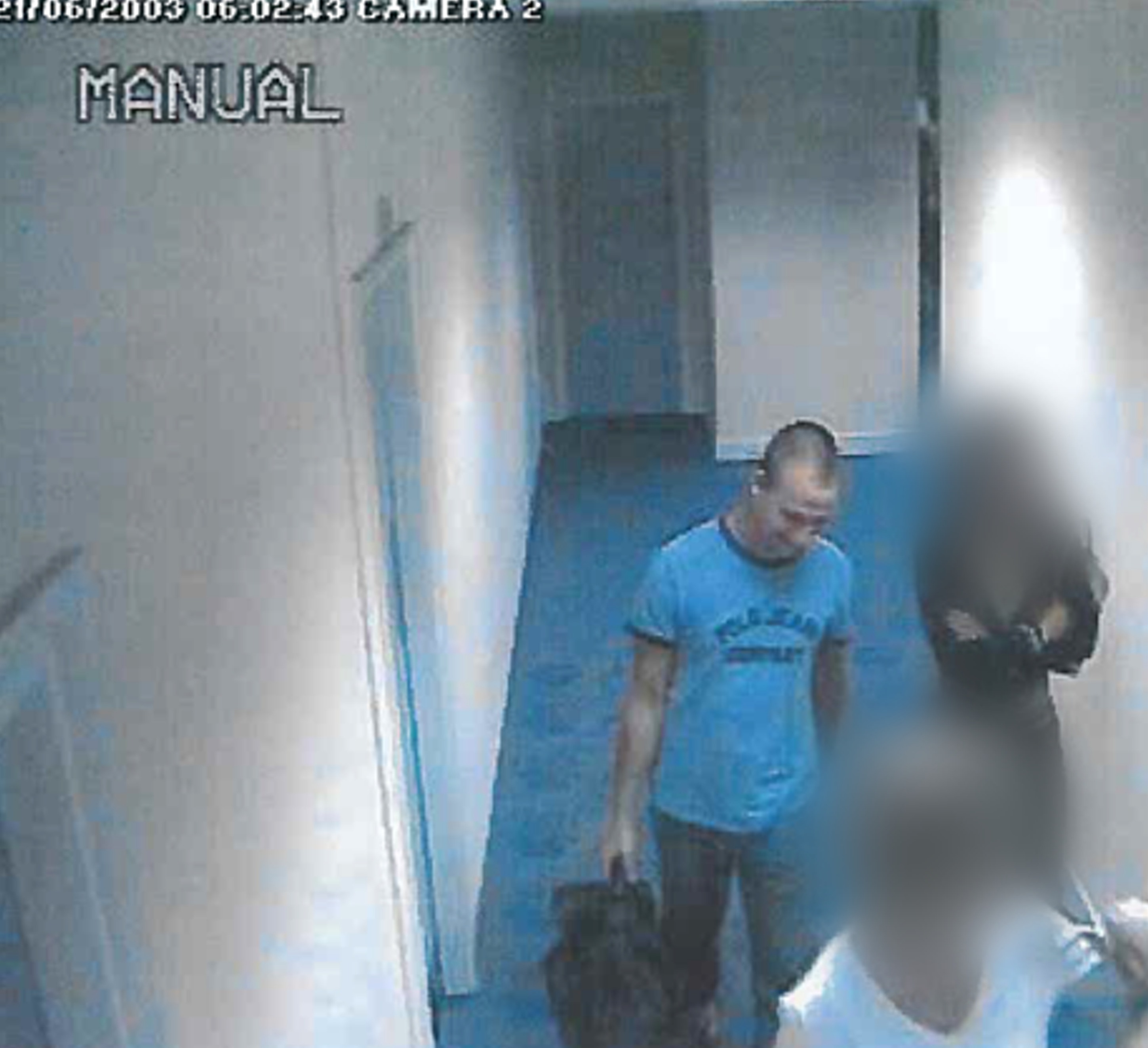 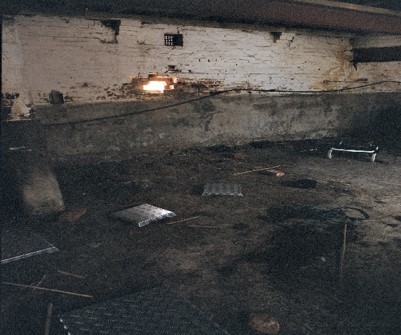