Appearing before a special court in his native Cambodia in 2009, Kaing Khek Iev confessed to a role in the brutal Khmer Rouge regime of the late 1970s that made him one of the most prolific mass murderers of recent history. 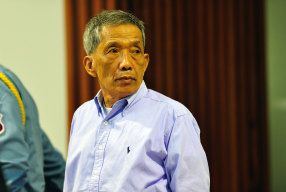 Kaing Guek Iev, also known as “Duch” in the court room during his 2010 trial in Phnom Penh. Credit:Getty

“I am solely and individually liable for the loss of at least 12,380 lives,” the former chief of the prison and torture centre known as Tuol Sleng told the tribunal in the capital, Phnom Penh. “I still and forever wish to most respectfully and humbly apologise to the dead souls.”

In convicting him of crimes against humanity and war crimes in 2010, the international court said the number of his victims probably was "considerably greater". On appeal, the court rejected his plea for release, unswayed by his conversion to evangelical Christianity and his arguments that he had been merely a "cog" in the Khmer Rouge killing machine.

The tribunal noted as aggravating factors his "leadership role and particular enthusiasm in the commission of his crimes".

Better known by his nom de guerre, Brother Duch, or simply Duch, the one-time mathematics teacher turned torturer died on September 2 at a hospital in Phnom Penh. He was 77. A prison official, Chat Sineang, said that Duch, who was serving a life sentence, was hospitalised after developing breathing problems two days earlier.

Duch (pronounced roughly as “Doik” in the Khmer language) was one of only three former leaders to go on trial for the depredations of the radical communist Khmer Rouge regime, which killed an estimated 2 million Cambodians during its 1975-1979 rule. He was the only one to admit his guilt.

Everyone sent to Tuol Sleng, Duch testified, was automatically presumed guilty and destined for execution in Cambodia’s "killing fields". He was aware that much of the information in the confessions he extracted was false – fabricated by prisoners who would say anything to stop the torture, he said. But he passed it on to his superiors anyway, perpetuating the cycle of new arrests and killings when inmates named their supposed "accomplices".

Khmer Rouge executioners typically clubbed prisoners with steel pipes or farm implements – to save bullets, Duch said – then slit their throats and pushed them into open pits. Duch’s men killed children who entered Tuol Sleng by dropping them on their heads from the building’s third floor or, he admitted, by "smashing them against a tree".

"Everybody who went there, from the smallest child to the highest member of the Communist Party, had the same fate," Cambodia expert David Chandler testified at Duch’s trial.

His victims included four Americans, detained and tortured at Tuol Sleng into making bogus confessions of espionage before being slaughtered ahead of a Vietnamese invasion that swept the Khmer Rouge from power in January 1979.

The grisly activities at the former secondary school – officially known during the regime as S-21, and now the Tuol Sleng Genocide Museum – were detailed in voluminous records that were left behind.

Duch and other Khmer Rouge leaders fled the capital as Vietnamese troops closed in, heading west to the border with Thailand. There he was demoted by his Khmer Rouge superior, Nuon Chea, the infamous "Brother Number Two" under overall leader Pol Pot, for his failure to destroy the documents abandoned at Tuol Sleng.

The eldest of five children and the only son, Kaing Khek Iev was born November 17, 1942, into a family of peasants of Chinese origin in central Cambodia’s Kampong Thom province. While studying for a teaching certificate in Phnom Penh, he came under the sway of the school’s director, Son Sen, who would later become Khmer Rouge, defence minister.

He taught maths at a provincial high school before leaving to join the Khmer Rouge in late 1967 and adopting "Duch" as his revolutionary name.

In his final written statement, a 29-page treatise that was part abject confessional, part history lesson and part plea for understanding and forgiveness, Duch cast himself as a powerless figure in the Cambodian catastrophe.

"I was a cog in an unstoppable machine," he wrote.