Tourists taking selfies among 11 killed by lightning strike in India

Eleven tourists were killed in a lightning strike while taking selfies at a popular tourist destination in the Indian state of Rajasthan, underscoring the deadly effects of the area’s monsoon season.

The local tourists, some of whom were taking selfies, were visiting the Amer Fort, built in the late late 1500s, in the capital city of Jaipur when lightning struck a nearby watchtower, Reuters reported. 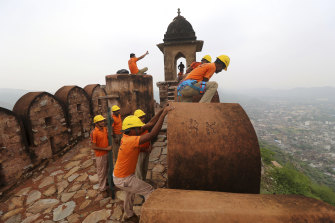 State Disaster Response personnel perform a search operation at a watchtower of the 12th century Amber Fort where 11 people were killed after being struck by lightning in Jaipur, Rajasthan state, India.Credit:AP

Shankar Lal Saini, a senior disaster management official in Jaipur, told CNN that when the lightning struck the tower, its walls collapsed and buried people under the rubble.

“Since the fort is on a hill, when the debris was falling and space reduced, some people also fell into a ditch,” he told the outlet.

At least 18 people, including the 11 at the fort, died on Sunday night, and about 16 other people were injured in Rajasthan, according to Reuters. Seven of the dead were children, the outlet reported.

Uttar Pradesh and Madhya Pradesh, neighbouring states, also lost citizens because of lightning strikes, with the former reporting the deaths of at least 41 women and children, and the latter counting at least seven dead, according to the BBC. 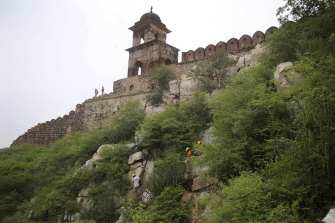 Workers search for survivors at at the scene of the horrific lightning strike. Credit:AP

Prime Minister Narendra Modi tweeted that he was “saddened by the loss of lives” and damage caused by the strikes and announced that the state government would provide assistance to those affected and compensation for relatives of the deceased.

The India Meteorological Department has predicted that more severe thunderstorms are on the way with the potential to harm people and livestock.

The rainy season, which occurs between June and September, boosts fatality numbers in Uttar Pradesh and Madhya Pradesh states because of the large number of people who work in the agricultural or construction sectors or live in areas with little to no tree cover, experts told the BBC.

Lightning-strike deaths have doubled in India since the 1960s with a possible culprit being climate change, S.D. Pawar, a project director with the Indian Institute of Tropical Meteorology, said recently at an awareness workshop on lightning and thunderstorms, Indian news outlet the Federal reported.