Three Texas women who were caught on video attacking a Carmine’s restaurant hostess in a dispute over proof of vaccination were arraigned in the Big Apple Tuesday on charges that could land them behind bars for up to one year.

The alleged attackers — Sally Rechelle Lewis, 49, of Houston, and Kaeita Nkeenge Rankin, 44, and Tyonnie Keshay Rankin, 21, both of Humble, Texas — were each charged in Manhattan Criminal Court with two counts of third-degree assault, attempted assault and harassment for the Sept. 16 beatdown.

“We greatly appreciate how seriously the district attorney’s office is taking this attack on our staff,” said a spokesperson for Carmine’s. “Restaurant workers are part of our city’s lifeblood, and today sends a strong message that criminal acts like these will not be tolerated.”

(The Office of Gale Brewer)

A lawyer for Kaeita Nkeenge Rankin previously told the New York Times that the hostess at the Upper West Side eatery had acted in a “very aggressive” manner and uttered the N-word during the wild brawl — an allegation the restaurant’s owner has flatly denied.

The fight erupted after two men arrived at the restaurant to meet the women but could not provide proof of vaccination and were denied entry, the paper reported. The women, who had already shown the hostess their inoculation papers and were seated inside, went back outside to meet their friends.

In the disturbing cellphone footage, the tourists are shown surrounding the 24-year-old hostess and striking her on the shoulder, neck and face.

“F–k! Oh my God! What the f–k!” the restaurant staffer can be heard screaming in the clip as the hostess table she was standing behind is pushed over during the tumult. 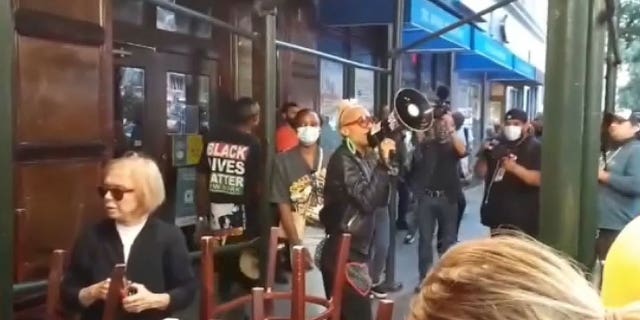 One defendant allegedly yanked off her necklace, breaking it and leaving a laceration, court papers allege.

The hostess suffered a concussion, extensive bruising and scratches on her face, according to the criminal complaint.

The restaurant’s owner Jeffrey Bank publicly released surveillance video of the altercation and insisted there was no evidence of any racial slurs being used, noting that the victim is Asian American.

City regulations require people 12 and older to show proof of vaccination to dine indoors at restaurants, catering halls and other gathering places.