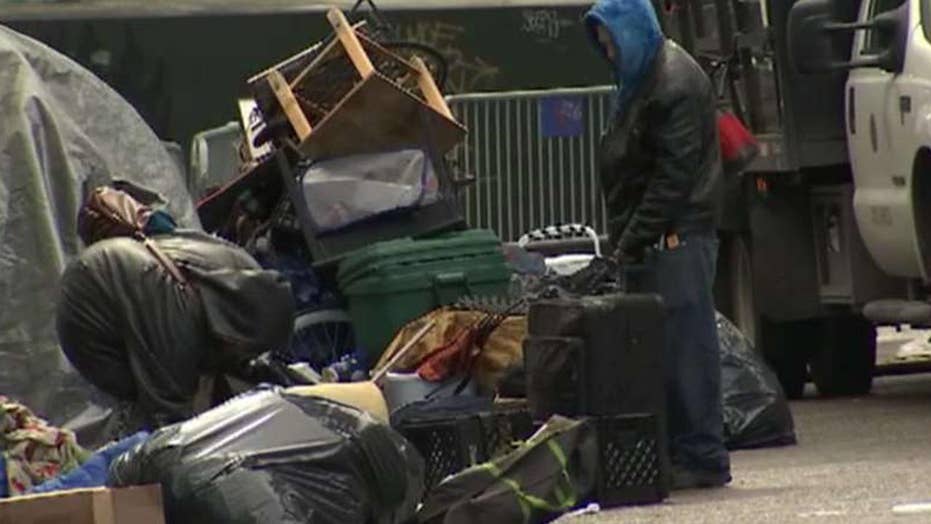 Steve Hilton: San Francisco is a civic catastrophe and it is entirely the responsibility of the Democrats and the self-righteous Big Tech overlords who slavishly back them.

A California trade union is seeking to block a major residential construction project in the heart of housing-starved Silicon Valley, claiming there will be a bloodbath of birds due to the proposed building's reflective windows.

The Laborers International Union of North America (LIUNA), which represents construction workers in Sunnyvale – a city of about 140,000 residents between Stanford University and downtown San Jose — has sued the city and its council over the project.

SOME SAN FRANCISCANS NOW LIVING ON THE BAY AS HOUSING CRUNCH SENDS THEM TO BOATS, BARGES

The union claims that the approved 1,051-unit residential project, sponsored by the Irvine Company, may cause permanent damage to the environment and thus must be scrapped, Reason magazine reported.

The project would tear down office buildings in an industrial area and instead build apartments and townhouses, providing desperately needed affordable housing in the area. More than half the units would also be rented at below-market prices to people on lower incomes.

But the union’s lawsuit says that unless additional environmental review is conducted, the project will cause damage to residents and wildlife. The lawsuit notes that birds will be killed as the proposed project features reflective windows.

According to the outlet, the trade union is using the California Environmental Quality Act (CEQA), a law mandating government agencies to study potential environmental impacts, to disrupt the project. Rather than protecting the environment, the decades-old law has been used by interested groups in the past to ensure unwanted projects don’t get off the ground.

The trade union’s chapter in Los Angeles is even accused of precisely that – filing frivolous CEQA complaints to a building project to ensure the company in charge of it hires all-union labor. The developer, Icon, says the union’s actions violate federal racketeering laws, according to the outlet.

The Sunnyvale union says that more than 500 birds would die by flying into the project's reflective windows, while the residents’ cats could also increase this number even further, causing serious environmental damage.

It remains unclear whether the city will stave off the legal challenge. The project could be delayed months or even years before the actual construction begins.