On Thursday, former women’s tennis world number one Victoria Azarenka beat Serena Williams to go through to the final of the US Open.

Since then, Azarenka – from Belarus – took time away from tennis to give birth to her son Leo in December 2016, and had her comeback stalled by a lengthy custody battle with Leo’s father.

Immediately after Wimbledon 2017, Azarenka split with boyfriend Billy McKeague, which led to a custody case over their son in Los Angeles in August 2017, forcing Azarenka to withdraw from the remaining tournaments that year.

As a non-American, it was initially ruled that she could not take her son out of California, so she chose to withdraw from the tournaments so she could stay with Leo.

‘As we work to resolve some of the legal processes, the way things stand now is that the only way I can play in the US Open this year is if I leave Leo behind in California,’ Azarenka wrote in 2017, ‘which I’m not willing to do.’ 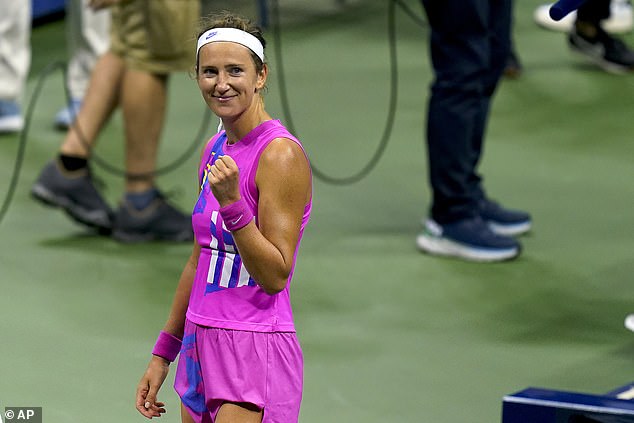 Victoria Azarenka, of Belarus, reacts after defeating Serena Williams, of the United States, during the semifinal match of the US Open in New York. Azarenka has taken long spells away from tennis, first for the birth of her son Leo in 2016, and then for a custody battle 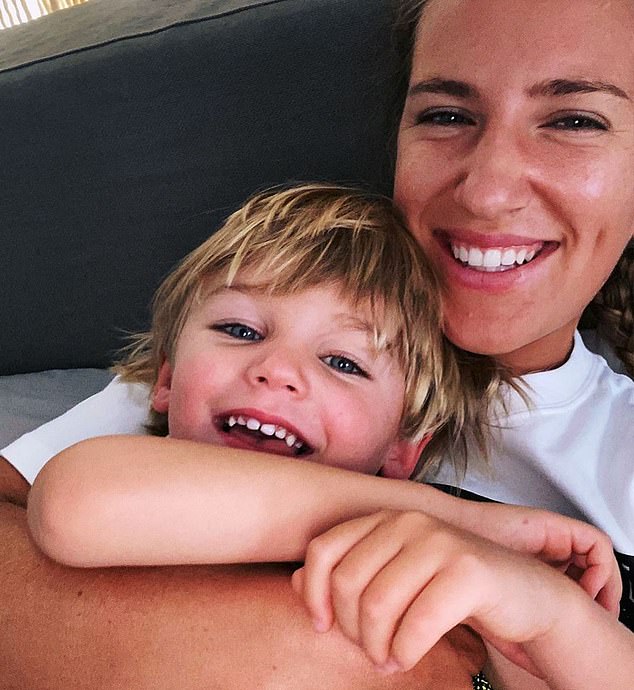 After Wimbledon 2017, Azarenka split from her boyfriend Billy McKeague, and in August a custody battle over their son Leo (pictured) began. Azarenka dropped out of the remianing 2017 tournaments as she did not want to leave California without him

At the beginning of 2018, it was reported that Azarenka had won an early round of the U.S. custody proceedings, with a LA judged ruling that the case should take place in Belarus, rather than Los Angeles county.

Speaking ahead of returning to the tour in April 2018, Azarenka said: ‘I wouldn’t wish that on anybody to go through what I’ve been going through, but it’s part of life and there are blessings in this situation as well for me.

‘I’m free but it’s definitely been and still is a really difficult situation to be in and it’s hard to only focus on playing tennis. One day I’ll write a book about this, because it’s Hollywood-worthy for sure. But right now I just want to keep it a little bit private.

‘It’s unfortunate and it’s not a great time but it’s part of life and I’m still 28 years old and recently there are number ones over 30 so I’m okay with that. I’m still young.’

But in 2018, California Courts of Appeal ruled that the Los Angeles County Superior Court did have jurisdiction over the child custody case, overturning the Belarus jurisdiction decision.

Today, reports suggest that she finally won the custody battle, and was living with her son during lockdown and the subsequent suspension of the WTA Tour.

Speaking to thetennischannel.com, she said that during this time she has found her son also has a competitive streak.

‘It’s been one month just with him and his competitive side comes out. He always wants to win everything. It’s impossible to play with him if he doesn’t win. That’s been a little bit of challenge for me because I like to win as well,’ she said.

‘I have to pretend that I’m losing to him all the time. This drives me a little crazy, to be honest.’ 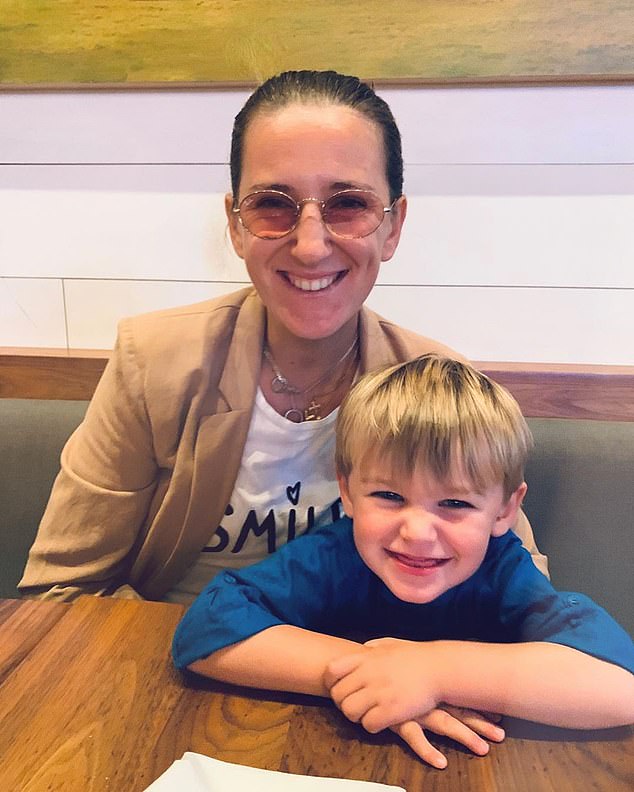 At the beginning of 2018, it was reported that Azarenka had won an early round of the U.S. custody proceedings, with a LA judged ruling that the case should take place in Belarus, rather than Los Angeles county

Currently ranked 27th in the world, speaking ahead of Saturday’s final, Azarenka said: ‘Mentally I’m in such a different place. I think seven years ago, after I won the Australian Open, and playing consistently with good results, it was kind of expected for me to be in the final.

‘I don’t think that was the case this year. But it feels more fun this year, more fulfilling, more pleasant for me. It feels nicer.’

Earlier this week, the Belarusian hailed the women who are competing on the WTA Tour while also juggling motherhood, which includes her semi-final opponent Serena Williams.

‘There’s a lot that goes into it in terms of balancing and juggling two things,’ Azarenka said. 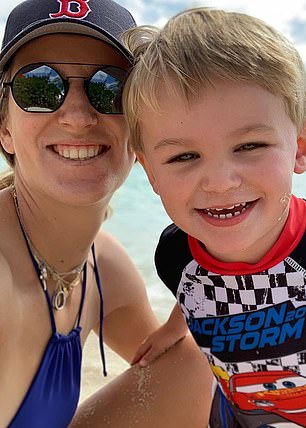 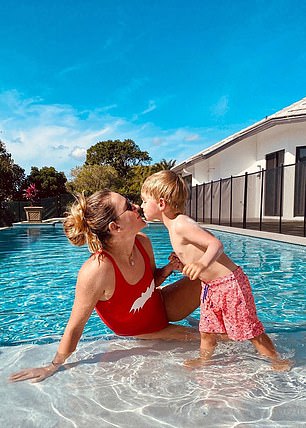 Earlier this week, the Belarusian hailed the women who are competing on the WTA Tour while also juggling motherhood, saying ‘my life began when I became a mother’

‘But identifying myself or other players just as mothers, I think that’s not the only thing that we are. We are also tennis players. We are also women who have dreams and goals and passions.

‘My life just began when I became a mother. I’ll say that really openly. I think to see that rise of women being able to fulfil their dreams, as well as balancing motherhood, I think they all are heroes.

‘I really, really appreciate all of them and I hope this continues to go on, where women are inspired to do what they love to do but still being able to go after what they want.’ 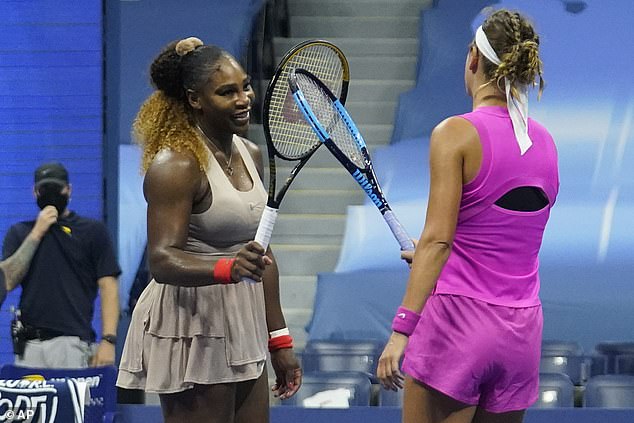 On Thursday, Azarenka came back from a one-set deficit to topple 23-time Grand Slam winner and fellow mother Serena Williams (pictured) 1-6 6-3 6-3 to win the semi final of the US open

Meanwhile, Azarenka’s coach is confident ahead of US Open final, saying on that she is in top form and ready to go the distance in her first Grand Slam final in seven years.

‘Physically she’s ready, to be honest. She worked a lot the last few months,’ coach Dorian Descloix said on Friday, a day ahead of her U.S. Open showdown against Osaka.

‘She worked every day on fitness. Even on the court we did a lot of long sessions on the court. Now she’s ready,’ he said.

The 31-year-old came back from a one-set deficit to topple 23-time Grand Slam winner Serena Williams, 1-6 6-3 6-3,  in their semifinal match inside Arthur Ashe Stadium on Thursday, returning to the sport’s peak from a long road littered with setbacks.

Azarenka, a two-time Australian Open winner, stunned a the Western & Southern Open, slaying competitors before winning on a walk-through after not securing a win of any kind in a year.