Trauma and uncertainty: Women struggling in the aftermath of Haiti earthquake 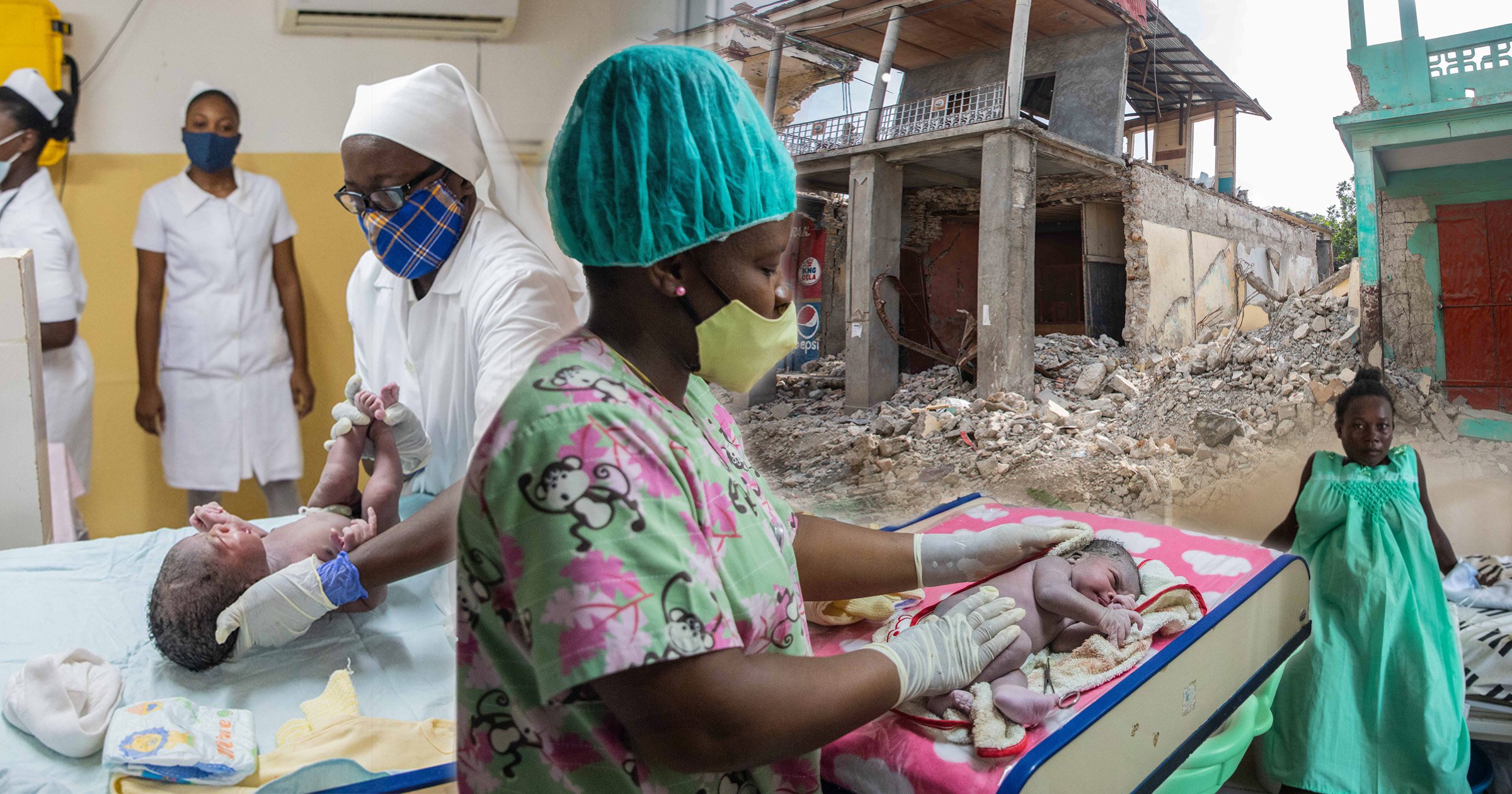 Just over three months ago the Caribbean country of Haiti was struck by a huge magnitude 7.2 earthquake which had devastating effects.

Although reports about the earthquake may have faded from the headlines, for a country still rebuilding from one of similar strength in 2010, Haiti is still suffering from the impact of the events of that day.

With residents tragically a long way away from recovery, women and girls have been particularly affected by the disaster – especially when it comes to healthcare.

Local medics have reported cases of stress-related premature births – which in turn is putting extra pressure on an already-strained health system.

The United Nations Population Fund (UNFPA), an agency aimed at improving reproductive, sexual and maternal health worldwide, has sent front-line workers to Haiti to help women amid the crisis.

Shockingly, staff found kidnapping, rapes and violence were being experienced on a regular basis by many women, and reported back that they are extremely worried about their future in a country hit by poverty, inequality and natural disasters.

Metro.co.uk spoke exclusively to some women who have been affected by the long-term consequences of the earthquake to find out what life is like.

‘I ran across a tin roof to escape’

Stéphane Edberg Belony, is a midwife-nurse at the south department of the Coteaux Health Center and works for an inter-agency health project which is run alongside the UNFPA.

She was at home when the earthquake hit and remembers clearly the chaos that ensued.

‘I was in the kitchen and I heard a noise,’ recalls the 29-year-old. ‘I opened one of the doors and the gas stove fell.

‘Gas [spread through] the house and a fire broke out.’

Desperate to flee the flames, Stéphane managed to dash onto the tin roof of her house and across the tops of other homes nearby. But as her building was damaged by the quake it meant that once it had finished, she didn’t have a place to return to.

‘I slept in the public square on the day of the earthquake,’ she says. ‘After that, I lived with a friend for about eight days.’

Now, Stéphane lives with relatives in Haiti’s capital Port-au-Prince, but has said the health centre where she works also suffered damage.

‘Its doors are locked,’ she explains. ‘Discussions are underway with the town hall to find out when the health centre could start operating in another location.’

Despite the facilities being destroyed during the disaster, Stéphane tells us she was supplied with equipment from the National Ambulance Centre so she could help attempt to rescue some of the victims.

‘I have taken care of many people,’ she says, before listing some of the injuries she’s had to deal with: ‘Broken head, dislocated bones…’

Among them, she tells us, was also a six-month pregnant woman who was at risk of a pre-term delivery, which the team sent on to a hospital in Port Salut over half an hour’s drive away, after giving her initial treatment.

‘We also looked after a woman whose face had been crushed by a wall during the earthquake. We treated her and referred her to the hospital, but she died,’ remembers Stéphane sadly.

Nurse and midwife Lourdjina Dorilas has worked at a maternity hospital in Haiti, St Antoine de Jérémie, since June 2018.

Describing a typical day in her job, she says, ‘We often work in the morning, we pray, and we check the service report to know which women we need to look after first.

‘Then we put the necessary equipment in place for childbirth and other healthcare.’

As well as supporting women as they give birth, Lourdjina and the team help mums-to-be who are suffering from pre-eclampsia – a condition in pregancy that can be fatal if left untreated.

‘We accompany them for psychological and emotional support,’ she explains, adding that their role also involves looking after newborn babies, too.

‘We take care of almost everything – with the exception of prenatal consultation,’ Lourdjina adds.

But since the quake she says she’s seen extra pressure put on the hospital and admits that there’s been an increase in babies coming early.

‘There have been several women giving birth prematurely, which is linked to the stress of the August 14 earthquake,’ explains Lourdjina.

‘There were a lot of deliveries and there are only two of us on [duty]. But we took care of emergencies.

‘We have responded to the most urgent needs, so as to save more lives.’

On average the hospital performs more than 100 deliveries per month, including both vaginal deliveries and caesarean sections.

Lourdjina gives an example of one woman who went into labour prematurely, saying, ‘We prepared her psychologically so that she would know why we are rushing with her so much.

‘We [listened] to the baby’s heart through a device that transmitted sound from the mum’s womb to the outside.’

Worringly it signalled that the baby might not survive, so Lourdjina and her team got ready to support the mum and were poised to resuscicate the baby if needed.

‘The mum could not be operated on as quickly as we had hoped,’ she remembers. ‘We eventually accompanied her to the operating room and reassured her until the birth. Luckily the baby came out alive.’

New mum Jelette Théodore, 29, had a baby shortly before the earthquake – yet even then feared for her and her child’s health.

When she was first told that she would need a caesarean section she admits to feeling traumatised.

‘Because I know all the risks associated with caesarean sections, especially since you live in a country with a failing health system,’ she explains.

‘But thanks to the support of my midwife and gynecologist, I finally accepted the procedure and it went well.’

In comparison Monise Julie, 28, had her baby just weeks after the natural disaster.

She was taken to the St Antoine de Jérémie hospital after she started suffering pain and when her waters broke, the liquid was yellow.

It was a journey that involved having to cross a ravine and take a slow motorbike to get there.

In need of a caesarean section, Monise was told by doctors: ‘The baby could die, and the mother could also die. This is a risky case.’

However, her delivery went smoothly. ‘After 16 minutes everything was okay,’ she says, revealing that she’s named her baby Devcali Marcelin.

According to midwife Lourdjina, it’s not just childbirth that has become more of a difficulty to women in Haiti since the earthquake.

‘For those I am fortunate enough to meet, I can see concern in their eyes for the future,’ she explains.

‘This is why nowadays, many women leave the country in illegal and dangerous conditions to take refuge in other countries – because their own has become unlivable and repulsive.

Lourdjina adds that she feels Haiti’s ‘socio-political situation, the failure of our health system, the Covid-19 pandemic and gender inequality’ have also impacted the future of women across the country.

‘Women continue to struggle every day to have their economic independence, to have access to equitable health care, to be in peace and in security,’ she explains.

‘On the other hand, Haiti has few women who play key roles, whether political, social or economic due to the inferior status of women in society.

‘These women are less educated, have high levels of poverty and maternal mortality, and less access to jobs.’

Those who do attempt to ‘break away from traditional roles’ can ‘face high levels of violence’ while doing so, suggests Lourdjina.

‘They have become vulnerable to banditry and gangs which are in full swing in our country,’ she explains. ‘They fear being kidnapped and raped, and often live with the physical and psychological after-effects and traumas of such insecurity.

‘Haitian women are currently desperate and have a lot of concern for their future.

‘I also look to the future with a suspicious eye,’ admits Lourdjina. ‘Because the situations we are currently experiencing in this country are very stressful, unacceptable and frightening.

‘We live in an eternal uncertainty.’

What the UNFPA do

To maintain health services amid the crisis, the UNFPA and its partners have deployed mobile health teams all around the affected areas in Haiti. Capacity at more than 40 health facilities and hospitals is being strengthened to ensure providers can manage pregnancy-related complications, deliver family planning services and provide support for survivors of sexual and gender-based violence, including psycho-social counselling and referrals.

You can help the organisation by making a donation here.