London: German airline Lufthansa has warned long-haul flights will cost passengers around $800 more if Europe is to meet its aggressive carbon emissions cuts.

European Commission President Ursula von der Leyen wants Europe to slash its greenhouse gas emissions by 55 per cent by the end of the decade, as part of the ambition for Europe to become the world’s first carbon-neutral continent by 2050. 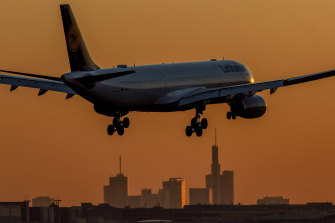 A Lufthansa aircraft approaches the airport in Frankfurt, Germany, at sun rise.Credit:AP

The commission has mandated that 63 per cent of fuels supplied to the aviation industry in the EU must be sustainable by mid-century and has set out even more ambitious revised climate measures in its recently released “Fit for 55” package part of the European Green Deal.

Sustainable aviation fuel (SAF) is more expensive and constituted just one per cent of aviation fuels used worldwide in 2019, according to Shell which produces it.

Speaking on a virtual panel for Politico Annette Mann from Lufthansa’s corporate responsibility unit said that meeting the EU’s climate targets would add up to €20 billion ($31.4 billion) in extra costs between now and 2030.

“In the mid-2030s, we expect that it will definitely be a three-digit figure for an economy class ticket if everything comes as is proposed and if the projected costs of SAF comes [down] to what is estimated today,” she said.

She said customers could already calculate the cost of flying on 100 per cent sustainable fuelled flights – between €400 to €500 ($630 to $780) extra for a long-haul flight and an additional €100 for domestic flights.

She said this did not factor in the costs of the airline having to acquire energy-efficient aircraft and pointed out that Lufthansa’s profits in good years were around €3 billion.

But she said more expensive airfares were not something the company was “in general afraid of”; its only fear was being put at a competitive disadvantage if international rivals were not subjected to the same requirements to decarbonise.

“We are aware of [the extra expense] but we also know that we need this kind of regulation, especially the SAF mandate, to drive the transformation of the industry,” she said.

European Commissioner for Transport Adina-Ioana Valean, who was also speaking on the panel, ruled out a flight ban, like the one imposed by France on short air travel where train trips are available.

“I come from a former Communist country and I’m not in the business of telling people how to conduct their lives, just telling them not to fly, it sounds like a controlled economy,” the Romanian politician said.

Lufthansa is trialling green hydrogen in its planes in Abu Dhabi but the technology is still considered at least a decade away.

Mann said that electric planes were still not viable in the medium term because the batteries required to power planes were too heavy, meaning they would only be useful for very small aircraft flying short distances.

Get weekday updates on the climate summit that will shape our future. Sign up to our COP26 newsletter here.

Co, Could, EUROPE, to, Travelling
Celebrities