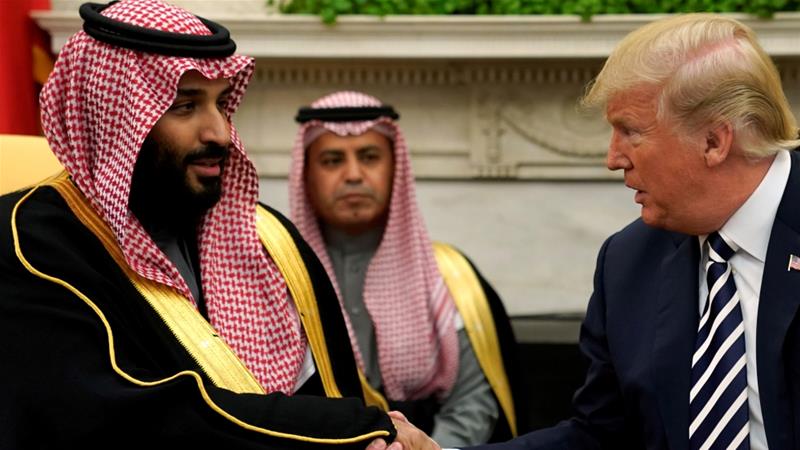 US President Donald Trump and Saudi Crown Prince Mohammed bin Salman (MBS) discussed the escalating tensions between Iran and the United States in a phone call on Friday, the White House said.

The call came a day after Iran downed a US unmanned military drone, prompting fears a major open military confrontation between the US and Tehran.

Iran said the Global Hawk drone was shot down as it flew over its territorial waters, but Washington said the drone was in international airspace.

Trump confirmed on Friday that he had cancelled a military attack against Iran following the downing of the drone, saying the retaliatory attacks would not have been a proportionate response.

During Friday’s call, Trump and MBS also discussed “Saudi Arabia’s critical role in ensuring stability in the Middle East and in the global oil market”, the White House said in a brief statement.

Oil prices have surged as much as 10 percent over the past week amid regional tensions that have been rising between the US and Iran since Washington unilaterally withdrew last year from a landmark 2015 nuclear deal.

The US has since embarked upon a diplomatic and economic campaign to ramp up pressure on Iran to force it to renegotiate the agreement.

Part of its campaign has included the re-imposition of US sanctions on exports of Iranian crude oil, which has sent the Iranian economy into a nosedive. The US has largely relied on Saudi Arabia to make up the declined global oil outputs following the economic penalties on Iran.

The US has also increased its military presence in the Middle East, deploying a carrier strike force, bomber task force and Patriot missile battery and using threats from Iran as justification for the actions.

On Monday, the Trump administration announced it would be sending an additional 1,000 troops to the Middle East, citing increased threats from Iran.

There was no word from the White House on whether during Friday’s phone call, Trump raised with MBS the October 2018 murder of Saudi journalist Jamal Khashoggi.

A 100-page report by the UN special rapporteur on extrajudicial executions, Agnes Callamard, earlier this week accused Saudi Arabia of a “deliberate, premeditated execution” and said the crown prince should be investigated for it.