Washington: US President Donald Trump confronted a crisis on Friday that could undercut badly needed support in the military community for his re-election campaign as he sought to dispute a report that he privately referred to US soldiers killed in combat as "losers" and "suckers".

Trump came under intense fire from Democrats and other opponents who said a report in The Atlantic demonstrated his actual contempt for those who serve their country in uniform. 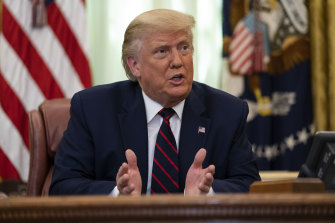 US President Donald Trump has denied a report that he called fallen soldiers “losers” and “suckers”. Credit:AP

Speaking with reporters next to Air Force One after returning from a campaign rally on Thursday night, Trump heatedly denied making the comments, as reported by the magazine.

"If people really exist that would have said that, they're lowlifes and they're liars," Trump shouted above the noise of the plane's engines. "And I would be willing to swear on anything that I never said that about our fallen heroes. There is nobody that respects them more."

In the Oval Office on Friday (Saturday AEST), he again derided the Atlantic, calling its reporting a "disgrace," adding, "especially because I've done more for the military than almost anyone else".

"To me they're heroes," Trump said about US service members. "It's even hard to believe how they can do it, the level of bravery, and to me they are absolute heroes."

On Friday, John Bolton, his former national security adviser, said he was on the trip in question and never heard Trump make those remarks.

The report by The Atlantic's editor-in-chief, Jeffrey Goldberg, said that Trump decided against visiting a cemetery for US soldiers killed in World War I during a 2018 visit to France because the rain would have mussed his hair and because he did not believe it was important to honour the war dead.

The article attributed the episode to "four people with first-hand knowledge of the discussion that day," but did not name them.

During a conversation with senior officials that day, according to the magazine, Trump said: "Why should I go to that cemetery? It's filled with losers." On the same trip, the article said, he referred to American Marines slain in combat at Belleau Wood as "suckers" for getting killed.

The article also said that Trump's well-known antipathy for Senator John McCain, a Vietnam War hero, was on display after the senator's death in August 2018.

"We're not going to support that loser's funeral," the article quotes Trump telling his staff. He became furious at seeing flags lowered to half-staff. "What the f— are we doing that for? Guy was a f—ing loser," the President told aides, according to the article.

People familiar with Trump's comments say he has long scorned those who served in Vietnam as being too dumb to have gotten out of it, as he did through a medical diagnosis of bone spurs in his heels. At other times, according to those familiar with the remarks, Trump would marvel at people choosing military service over making money.

Former vice-president Joe Biden, the Democratic nominee, issued a statement condemning the President and saying it demonstrated that Trump was not fit for the office.

Half a dozen current and former aides to Trump backed him up with Twitter messages disputing the Atlantic article.

"I was actually there and one of the people part of the discussion – this never happened," wrote Sarah Huckabee Sanders, who was then the White House press secretary.

"This is not even close to being factually accurate," added Jordan Karem, the President's personal aide at the time.

Our weekly newsletter will deliver expert analysis of the race to the White House from our US correspondent Matthew Knott. Coming soon. Sign up now for the Herald‘s newsletter here, The Age‘s here, Brisbane Times‘ here and WAtoday‘s here.