Washington: Donald Trump dismissed his campaign advisers’ guidance that he should not declare victory at the 2020 election until all the votes had been counted and instead followed drunk lawyer Rudy Guiliani’s advice to “just claim he won”, a Congressional hearing has been told.

After opening its public sessions last week accusing the former US president of being at the centre of a deliberate conspiracy to overturn his 2020 loss, the second public hearing of the January 6 Capitol attack has centred on Trump’s false narrative of election fraud. 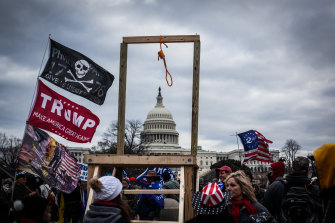 Trump supporters erected a noose prop near the US Capitol on January 06, 2021, and threatened to get then vice president Mike Pence.Credit:Getty Images

The committee produced more fresh video evidence of multiple people in Trump’s orbit, including his own campaigner manager Bill Stepien, all of whom repeatedly told him on the night of the election that he should wait for more postal votes to come through before he declared victory.

The only person arguing to the contrary was Rudy Guiliani, the former New York mayor-turned-lawyer who had taken on an advisory role to Trump during the 2020 campaign.

On the night of the November 3 election- as it was becoming increasingly clear that Trump might struggle to win – a “definitely intoxicated” Guiliani demanded to see the president and tell him to declare victory.

This is something that Trump eventually did late on the night, in a move that not only shocked the nation, but also his key advisers. 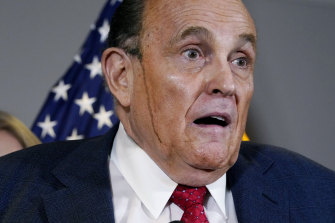 Hair dye runs down the face of Donald Trump’s personal lawyer Rudy Guiliani during a press conference in November. Credit:AP

“It was far too early to be making any calls like that. Ballots were still being counted and ballots were still going to be counted for days,” Stepien told the committee in videotaped evidence.

This was backed up by another adviser, Jason Miller, who gave evidence that: “I think effectively, Mayor Giuliani was saying: We won it; they’re stealing it from us; where all the votes come from? We need to go say that we won and essentially, anyone who didn’t agree with that position was being weak.”

Another video deposition was also played of Trump’s daughter Ivanka Trump. Asked what her view was of Guiliani’s advice to her father, she replied: “The results were still being counted. It was clear that the race would not be called on election night.”

Further evidence of his deposition was played today, in which Barr told the committee that he was worried Trump was becoming increasingly delusional in the aftermath of the 2020 election as he continued to make claims of rigged voting machines and fake votes being dumped in battleground states.

One of the most outlandish claims that year suggested that a cabal of bad actors, including a Venezuelan dictator and liberal financier George Soros, conspired to hack into voting machines manufactured by a company called Dominion Voting System.

Top White House lawyer, Eric Herschmann, told the committee that he never saw any evidence that the claims against Dominion were true, while Barr told investigators: “boy, if he really believes this stuff, he has … become detached from reality.”

The hearing was the latest in a series of a string of public sessions the committee is expected to hold in coming weeks. The first kicked off on Thursday night, in a prime-time TV extravaganza that gave Americans the first real glimpse of an 11-month-long investigation that has so far amassed about 140,000 documents, interviewed 1000 witnesses and cost $US3.5 million ($5 million). 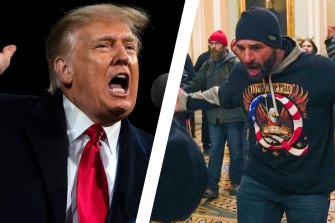 Donald Trump talked while rioters breached the US Capitol.

Over two hours, the committee laid out in meticulous detail the extent of Trump’s efforts to keep himself in office. It made the case that Trump not only incited the January 6 Capitol attack but was central to a sweeping and methodical conspiracy to overturn Biden’s victory despite the advice of his top aides and family members.

Trump, however, has rejected the claims, posting on his Truth Social platform: “The so-called ‘rush on the Capitol’ was not caused by me, it was caused by a rigged and stolen election!”

Among the other witnesses to appear today was Chris Stirewalt, a former political editor for Fox News who was sacked after projecting on election night that Biden would win Arizona. The decision infuriated Trump and his top aides, some of whom reportedly complained directly to Fox leadership about the call.

Another key witness was election attorney Benjamin Ginsberg, a respected Republican who played key roles in the George W Bush campaigns – including the 2000 Florida recount against Al Gore – and Mitt Romney’s two presidential campaigns. He told the hearing that “the 2020 election was not close” and detailed the failed court cases by Trump’s legal team.

Byung J Pak, a former Republican US attorney also testified about his investigation of voter fraud in Georgia, and Al Schmidt, a Republican city commissioner who counted votes in Philadelphia who received threats against his family after Trump attacked him on Twitter.