That’s how many fundraising messages the Trump campaign has sent to people on its mailing list since the US election, soliciting donations to fight Joe Biden’s victory. 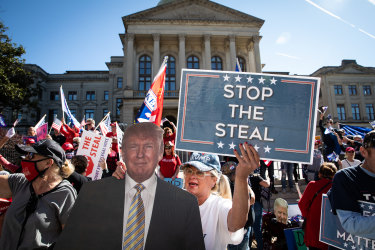 Demonstrators gather during a “Stop The Steal” rally outside of the Georgia State Capitol in Atlanta, Georgia, U.S. on SaturdayCredit:Bloomberg

Some of the emails drip with anger, like the ones from Donald Trump jnr repeating his father’s baseless claim: “The Left will try to STEAL this Election!”

Others are more tempered, like the messages from Vice-President Mike Pence warning that “the stakes have never been higher, which is why I’m coming to you with an urgent request.”

And some border on unhinged aggression, like the email from Team Trump 2020, which chastises anyone that hasn’t yet donated to the incumbent President’s so-called “Election Defence Fund”.

“This is your FINAL NOTICE. So far, you've ignored all our emails asking you to join us in DEFENDING THE ELECTION. You’ve ignored Team Trump, Eric, Lara, Don, the Vice-President AND you’ve even ignored the President of the United States.

"TENS OF THOUSANDS of Patriots have stepped up for the VERY FIRST TIME in the last 48 hours – why haven’t you?” 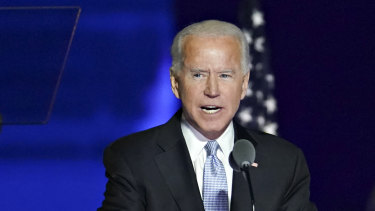 Almost two weeks since the election, Trump has not only refused to accept defeat, his team has been bombarding people with multiple emails a day requesting money to challenge the legitimacy of Biden’s win in the courts.

But the Election Defence Fund raises a number of concerns: partly about its true motives, and partly about the people it is targeting – some illegally.

US campaign finance laws make it clear that “campaigns may not solicit or accept contributions from foreign nationals”.

“Federal law prohibits contributions, donations, expenditures and disbursements solicited, directed, received or made directly or indirectly by or from foreign nationals in connection with any election — federal, state or local,” the Federal Election Commission says on its website.

However, the fundraising spam has gone out to people around the world, including individuals who never requested to be on Trump’s mailing list in the first place. Some, like Australian Labor MP Tim Watts, also happen to be part of a foreign political party, which also goes against FEC rules.

“The Trump campaign has continued to send unsolicited fundraising emails to my official email account for years now,” Watts noted on Twitter last week, posting a screen grab of Trump’s request for Election Defence Fund donations. “This one just hit my inbox.”

The stated aim of the fundraising campaign is also misleading. Click on any of the emails sent out in recent days, and you’ll be taken to an Election Defence Fund webpage asking you to make a recurring donation to stop “fraud like you’ve never seen” and “ensure we have the resources to protect the results”.

But the fine print reveals that the initiative is effectively creating a slush fund for Trump, in which smaller donations are unlikely to go towards a recount at all.

Indeed, if you donate anything under $US5000 ($6877), then 60 per cent of your contribution will go to an entity called Save America, Trump’s new Political Action Committee (or PAC, as they are often known) which was set up after the election and has broad discretion over how the money can be used.

Forty per cent goes to the Republican National Committee, which is a political operation, not a legal entity. 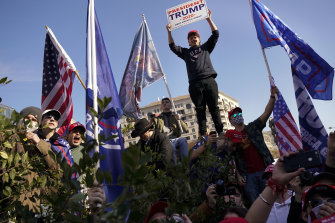 Loosley says that while some might believe their donation will help get Trump’s legal team in front of a judge to contest the election results, this particular fundraising effort is more likely designed to establish a pool of donors and build up campaign infrastructure for the future.

That future could involve Trump, or even one of his clan, having another tilt at the White House. While it might sound far-fetched to some, Trump has already reportedly told advisers he’s thinking about running for president again, according to a report last week by Axios’ well-connected correspondent Jonathan Swan.

The latest round of Trump spam comes as the incumbent president continues to pursue a range of lawsuits seeking to overturn the result of the November 3 poll. 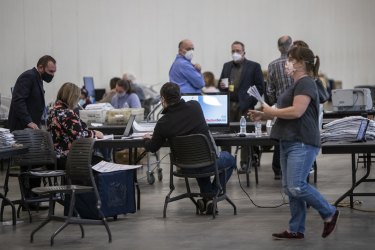 Some have alleged technical glitches or a lack of access for Republican “poll watchers”. Others have claimed that dead people have been casting votes, or that postal ballots arrived too late to be counted. But none have found evidence of widespread voter fraud.

If anything, Trump has been having a hard time making his legal case at all. On Friday (US time), in the latest setback, a federal appeals court rejected an attempt by Trump’s lawyers to block about 9300 mail-in ballots that arrived after Election Day in Pennsylvania.

In Arizona, a lawsuit seeking the inspection of ballots in metro Phoenix was thrown out after Trump’s lawyers acknowledged the small number of votes in question wouldn’t change the outcome in the state.

And in Michigan, a judge rejected claims that Detroit officials had committed fraud or tainted the count with its handling of absentee ballots. 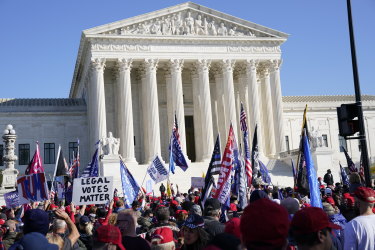 Demonstrators gather outside of the U.S. Supreme Court building during the “Million MAGA March” in WashingtonCredit:Bloomberg

As Democratic election lawyer Marc Elias told reporters during a phone briefing that day: "Trump's legal strategy seems to be aimed at denying the inevitable."

Nonetheless, Trump remains unperturbed, at least publicly, keeping up the spirits of his base. This is crucial for Republicans in the lead up to the all-important run-off elections in Georgia in January, which will decide who gets control of the Senate. Put simply, Democrats, who control the House, need to flip the Senate to easily implement Biden's first-term agenda.

In a sign of their ongoing loyalty, thousands of Trump supporters descended on Washington DC on Saturday to protest over the election result, joined by far-right groups such as the Proud Boys.

As for Trump, he drove by the rally in his motorcade on the way to his golf course, while his campaign sent out yet another fundraising email.

“We still have a long way to go if we’re going to successfully DEFEND the integrity of our Election, and the President is calling on YOU to step up to the front lines,” it said. “Please contribute $5 IMMEDIATELY.”