PARIS — Most countries lost patience long ago. The erratic outbursts of President Trump were unacceptable to allies when they were not simply insulting. Even rivals like China and Russia reeled at the president’s gut-driven policy lurches. Mr. Trump said in 2016 that America must be “more unpredictable.” He was true to his word.

The sudden infatuation with North Korea’s Stalinist leader, Kim Jong-un, the kowtowing to President Vladimir V. Putin of Russia, the “Chinese virus” obsession, the enthusiasm for the fracturing of the European Union, and the apparent abandonment of core American democratic values were so shocking that Mr. Trump’s departure on Wednesday from the White House is widely viewed with relief.

The sheen is off America, its democratic ideals hollowed. Mr. Trump’s imprint on the world will linger. While passionate denunciations are widespread, there is a legacy of Trumpism that in some circles won’t easily fade. Through his “America First” obsession, he galvanized other nations to put themselves first, too. They will not soon fall back into line behind the United States. The domestic fracture that Mr. Trump sharpened will endure, undermining the projection of American power.

“Mr. Trump is a criminal, a political pyromaniac who should be sent to criminal court,” Jean Asselborn, Luxembourg’s foreign minister, said in a radio interview. “He’s a person who was elected democratically but who is not interested in democracy in the slightest.”

Such language about an American president from a European ally would have been unthinkable before Mr. Trump made outrage the leitmotif of his presidency, along with an assault on truth. His denial of a fact — a defeat in the November election — was seen by leaders including Angela Merkel, the chancellor of Germany, as the spark to the Jan. 6 storming of the Capitol by Trump supporters.

A mob amok in the inner sanctum of American democracy looked to many countries like Rome sacked by the Visigoths. America, to foreign observers, has fallen. Mr. Trump’s reckless disruption, in the midst of a pandemic, has bequeathed to Joseph R. Biden Jr., the incoming president, a great global uncertainty. 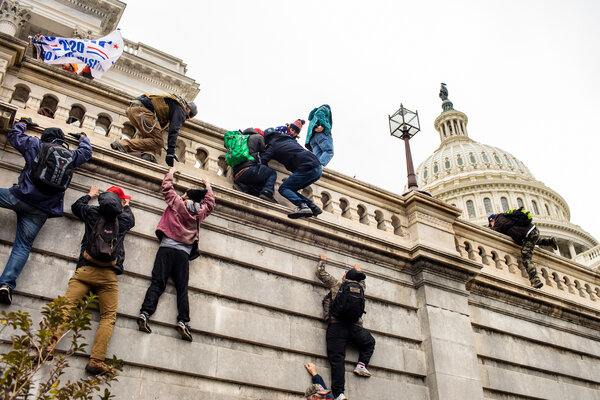 “The post-Cold War era has come to an end after 30 years, and a more complex and challenging era is unfolding: a world in danger!” said Wolfgang Ischinger, the chairman of the Munich Security Conference.

Mr. Trump’s talent for gratuitous insults was felt the world over. In Mbour, a coastal town in Senegal, Rokhaya Dabo, a school administrator, said, “I don’t speak English, but I was offended when he said Africa is a shithole.” In Rome, Piera Marini, who makes hats for her store on Via Giulia, said she was delighted Mr. Trump was going: “Just the way he treated women was chilling.”

“Biden needs to tackle the restoration of democracy at home in a humble way that allows Europeans to say we have similar problems, so let’s get out of this together,” Nathalie Tocci, an Italian political scientist, said in an interview. “With Trump, we Europeans were suddenly the enemy.”

Still, to the last, Mr. Trump’s nationalism had its backers. They ranged from the majority of Israelis, who liked his unconditional support, to aspiring autocrats from Hungary to Brazil who saw in him the charismatic leader of a counterrevolution against liberal democracy.

Mr. Trump was the preferred candidate of 70 percent of Israelis before the November election, according to a poll by the Israel Democracy Institute. “Israelis are apprehensive about what lies beyond the Trump administration,” said Shalom Lipner, who long served in the prime minister’s office. They have their reasons. Mr. Trump was dismissive of the Palestinian cause. He helped Israel normalize relations with several Arab states.

Elsewhere the support for Mr. Trump was ideological. He was the symbol of a great nationalist and autocratic lurch. He personified a revolt against Western democracies, portrayed as the place where family, church, nation and traditional notions of marriage and gender go to die. He resisted mass migration, diversity and the erosion of white male dominance.

One of Trump’s boosters, the nationalist Brazilian president, Jair Bolsonaro, claimed this month that in the American election, “There were people who voted three, four times, dead people voted.” In an illustration of Mr. Trump’s role as an enabler of autocrats, Mr. Bolsonaro went on to question the integrity of Brazil’s voting system.

Viktor Orban, Hungary’s anti-immigrant prime minister and a strong Trump supporter, told Reuters last year that the Democrats had forced “moral imperialism” on the world. Although he congratulated Mr. Biden on his victory, Mr. Orban’s relations with the new president are certain to be strained.

This global cultural battle will continue because the conditions of its eruption — insecurity, disappearing jobs, resentment in societies made still more unequal by the impact of Covid-19 — persist from France to Latin America. The Trump phenomenon also persists. His tens of millions of supporters are not about to vanish.

“Were the events at the Capitol the apotheosis and tragic endpoint of Trump’s four years, or was it the founding act of a new American political violence spurred by a dangerous energy?” François Delattre, the secretary-general of the French Foreign Ministry, asked. “We do not know, and in countries with similar crises of their democratic models we must worry.”

France is one such country of increasingly tribal confrontation. If the U.S. Justice Department could be politicized, if the Centers for Disease Control and Prevention could be eviscerated, and if 147 elected Members of Congress could vote to overturn the election results even after the Capitol was stormed, there is reason to believe that in other fractured post-truth societies anything could happen.

“How did we get here? Gradually and then suddenly, as Hemingway had it,” said Peter Mulrean, a former United States ambassador to Haiti now living in France. “We’ve seen the steady degradation of truth, values and institutions. The world has watched.”

As Simon Schama, the British historian, has observed, “When truth perishes so does freedom.” Mr. Trump, for whom truth did not exist, leaves a political stage where liberty is weakened. An emboldened Russia and an assertive China are more strongly placed than ever to mock democracy and push agendas hostile to liberalism.

Toward China, Mr. Trump’s policy was so incoherent that Xi Jinping, the Chinese leader, was left appealing to Starbucks, which has thousands of stores in China, to improve strained U.S.-China relations. Mr. Xi wrote last week to the company’s former chief executive, Howard Schultz, to “encourage him” to help with “the development of bilateral relations,” the official Xinhua news agency reported.

Mr. Xi no doubt feels some Trump whiplash. The president once called him just “great,” before changing his mind. China, after negotiating a truce in the countries’ trade war a year ago, came under fierce attack by the Trump administration for enabling the virus through its initial neglect and for its crackdown in Hong Kong.

Mr. Trump’s approach was erratic but his criticism coherent. China, with its surveillance state, wants to overtake America as the world’s great power by midcentury, presenting the Biden administration with perhaps its greatest challenge. Mr. Biden aims to harness all the world’s democracies to confront China. But Mr. Trump’s legacy is reluctance among allies to line up behind a United States whose word is now worth less. It seems inevitable that the European Union, India and Japan will all have their own China policies.

From Riot to Impeachment

The riot inside the U.S. Capitol on Wednesday, Jan. 6, followed a rally at which President Trump made an inflammatory speech to his supporters, questioning the results of the election. Here’s a look at what happened and the ongoing fallout: