Washington: US President Donald Trump has scornfully rejected "disgusting" talk among Democrats about launching an impeachment inquiry against him in the aftermath of the Russia probe.

Special Counsel Robert Mueller said on Wednesday that his report on Russian collusion in the 2016 presidential campaign did not clear Trump of obstruction of justice. Mueller also indicated it was up to Congress to decide whether he should be impeached. 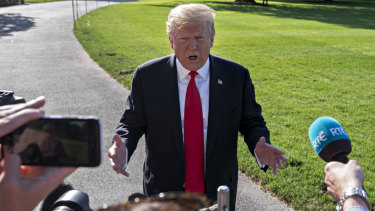 Donald Trump during a 20-minute tirade about Robert Mueller’s investigation.Credit:Bloomberg

The statement fuelled an increase in calls from Democratic lawmakers for impeachment proceedings, and US House of Representatives Speaker Nancy Pelosi, reacting to Mueller's statement, said "nothing is off the table".

Trump grew animated when reacting to Mueller's statement, was asked by reporters if he expected to be impeached.

"I don't see how … it's a dirty, filthy, disgusting word … it's a giant presidential harassment," he said at the White House on Thursday.

He cited the US Constitution's language that a president can be charged with "high crimes and misdemeanours."

The tirade came in a 20-minute press conference in which Trump also lauded arch British Brexiters Nigel Farage and Boris Johnson, and walked back on comments that appeared to suggest Russian interference helped him win the 2016 presidential election.

In a morning tweet, Trump had left the impression he was acknowledging that Russian interference helped him win the election over Democrat Hillary Clinton. He later said the exact opposite.

"No, Russia did not help me get elected," he told reporters, adding that he needed no help.

Trump heaped scorn on Mueller, calling him "totally conflicted" in part because he had wanted to head the FBI. 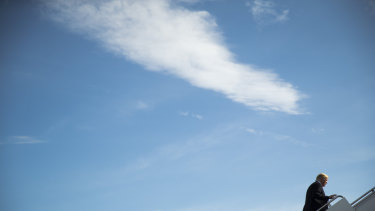 Trump is leaving for the UK on Sunday.Credit:AP

"I told him NO. The next day he was named Special Counsel – A total Conflict of Interest. NICE!," Trump said on Twitter, without providing evidence that Mueller, a Republican, had sought the FBI job.

"I think Mueller is a true 'never Trumper,'" Trump said.

Meanwhile, he praised two of Britain's key pro-Brexit politicians, though he stopped short of endorsing a candidate for the job.

Trump is preparing for a state visit to Britain which is fraught with the possibility of diplomatic peril.

During the visit, which starts on Monday attend ceremonies in Portsmouth and Normandy marking the 75th anniversary of the World War II allies' D-Day invasion. He and his wife Melania will also be treated to a full display of royal pageantry: a private lunch and official banquet at Buckingham Palace put on by Queen Elizabeth, tea with Prince Charles and a visit to Westminster Abbey.

"I like them … but I haven't thought about supporting them. Maybe it's not my business to support people, but I have a lot of respect for both of those men."

May, who announced her resignation a week ago after repeatedly failing to win approval for a deal under which Britain would leave the EU – is scheduled to leave office on June 7.

A British official, speaking in Washington to reporters on condition of anonymity, said there was no particular concern about what Trump might say or do.

"It's his business," the official said, describing a "lack of worry" among British officials.