Trump sits down for unscheduled chat with Merkel in UK

President Donald Trump had an unscheduled conversation with German Chancellor Angela Merkel on Thursday while the visiting leaders were at a D-Day event in the UK.

Trump and Merkel discussed the civil war in Libya for roughly 10 minutes, the White House told reporters, after they bumped into one another at an event commemorating the invasion.

Germany and the U.S. are seeking to deescalate a civil war in Libya that erupted in April after military general Khalifa Haftar and his supporters levied an attack on the nation’s capital.

Merkel was in the U.S. last week, delivering a graduation speech at Harvard University in Boston that took aim at Trump’s political ideology , but she did not come to Washington to meet with the U.S. president with whom she’s clashed.

She was invited to attend the British D-Day event in Portsmouth celebrating the heroism of allied force soldiers who battled German Nazis, even though her nation was on the opposite of the bloody fight that sucked in nearly every advanced nation. Germany is now a close partner of the countries it once fought against – it is a member of the North Atlantic Treaty Organization and contributes to the group’s defense budget. 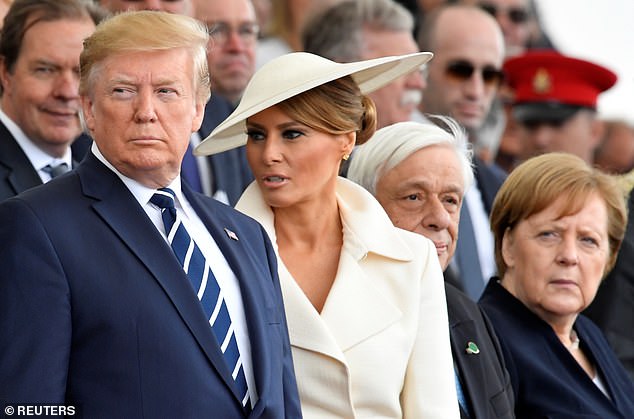 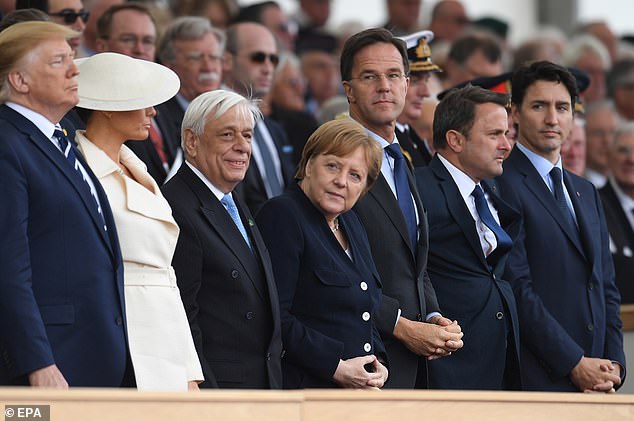 The two leaders ran into each other at an event commemorating the 75th anniversary of D-Day in Portsmouth, Britain 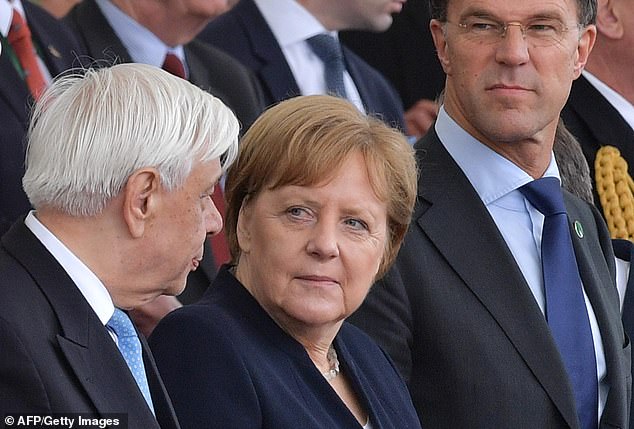 Last week, the liberal leader was in the U.S.  to deliver a graduation speech at Harvard University but she did not meet with Trump

Trump was the honorary guest of Britain in advance of the visit and held talks with outgoing Prime Minister Theresa May while he was in London. He meets on Thursday with French President Emmannuel Macron in Normandy, after another set of D-Day events at the American cemetery near the incursion site.

A substantive conversation with Merkel was not expected at the event. Reporters were rushed into an impromptu meeting that was smashed in between receptions that Trump was attending for WWII veterans on Wednesday afternoon before a private lunch with program participants that preceded his departure to overnight accommodations in Shannon, Ireland, where he owns a golf course.

Neither leader spoke while U.S. press were in the room. They smiled for cameras and held their tongues until journalists left the room.

The White House said they discussed ‘the current situation in Libya and the deteriorating conditions in West Africa’ in statement it provided journalists later.

‘They agreed to discuss further at the G20,’ the readout of the meeting provided by the White House on Thursday afternoon local time said.

No additional information on the leaders’ conversation and how it came about was available on Thursday afternoon. While pull-aside meetings like the one that Trump and Merkel had at not uncommon at gatherings like the one they were attending in Britain, it was unusual that the two heads of state entered into last-minute talks about Libya after Merkel’s trip to the U.S. a week prior didn’t include a stop at the White House.

In her Harvard commencement address, Merkel made the case for a liberal world order that holds alliances and the values they’re built on in the highest esteem. 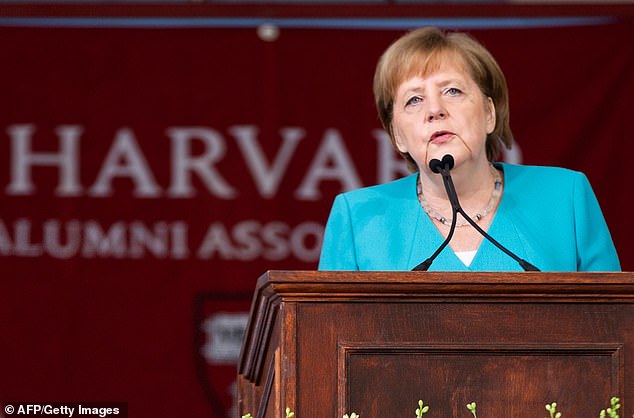 During her remarks, Merkel criticized Trump’s political ideology. ‘Democracy is not something we can take for granted. Neither is peace, and neither is prosperity,’ Merkel said at the commencement address 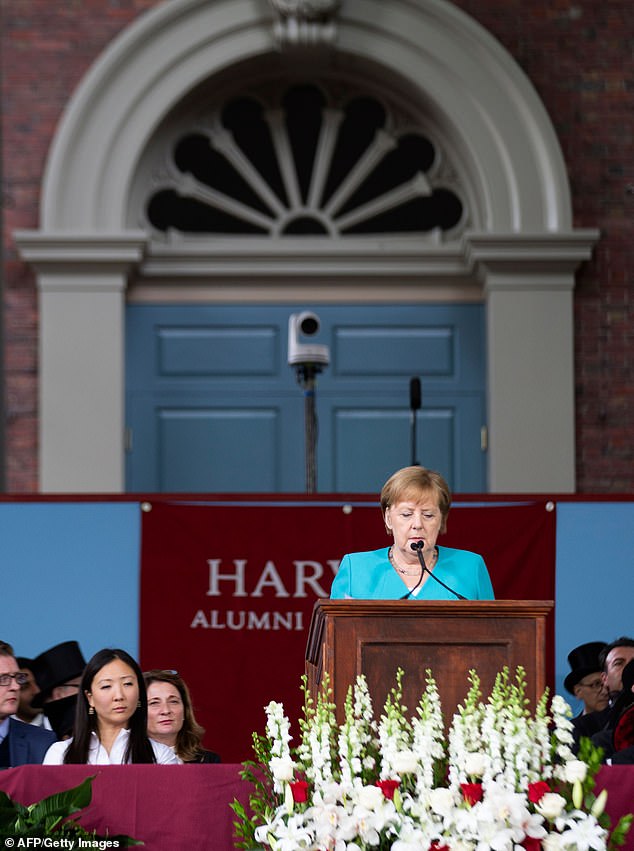 ‘Nothing can be taken for granted. Our individual liberties are not givens. Democracy is not something we can take for granted. Neither is peace, and neither is prosperity,’ she said at one point ‘But if we break down the walls that hem us in, if we step out into the open and have the courage to embrace new beginnings, everything is possible.’

At several turns, the German chancellor seemed to be tweaking to her American counterpart. She urged graduates to ‘tear down walls of ignorance and narrow-mindedness’ and railed against policies that ‘jeopardize free international trade, and thus the very foundations of our prosperity.’ The first line delivered in a reference to Trump’s border wall to keep out illegal immigrants, and the second in a slap at Trump over a range of tariffs.

She also endorsed a strategy of ‘together rather than alone’ for participants of international security alliances.

Merkel has been pressing her counterparts to enforce a United Nations resolution supporting the democratic government of Libya. She called on a rebel-led group to quit its attempt to take Tripoli by force from the popularly-elected government.

She told rebel general Khalifa Haftar that he and his supporters ‘immediately end all military operations’ in an April call with UN-supported leader Fayez Sarraj.

‘There can be no military solution in Libya,’ Merkel told Sarraj , according to a spokesman, on a week that saw 56 deaths. ‘The political process must continue under the direction of the United Nations.’

The U.S. has avoided a direct intervention in the raging civil war in the African nation, after a 2011 strike that toppled Libyan dictator Moammar Gaddafi but failed to bring about lasting peace.

Trump pulled the small group of U.S. forces that remained in Libya from the country as fighting intensified in April. 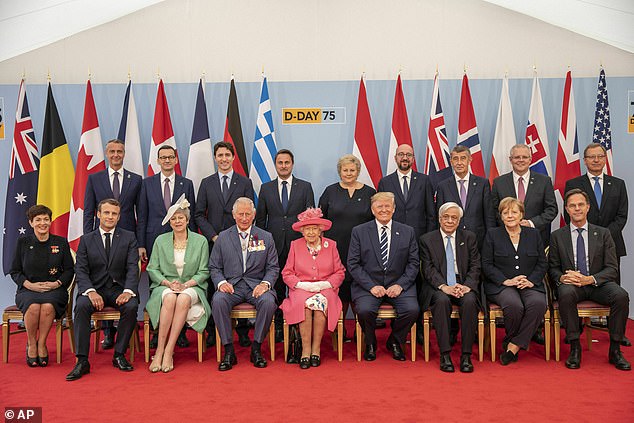 U.S. Secretary of State Mike Pompeo called for restraint from all sides as he lobbied for Haftar’s forces to fall back.

‘We oppose the military offensive and urge the immediate halt to these military operations against the Libyan capital,’ Pompeo said. ‘Forces should return to the status quo ante positions.’

Trump delivered a similar message to Heftar in a mid-April call that preceded the United States’ withdrawal of its peacekeeping force.

He and Heftar discussed the ‘ongoing counterterrorism efforts and the need to achieve peace and stability in Libya,’ the White House said at the time.

State Department spokeswoman Morgan Ortagus told beat reporters prior to Trump’s trip to Europe this week that the administration is encouraging both sides to participate in a peaceful political process.

‘We obviously have supported the UN process in Libya. And Haftar, we believe, we can play an important role in, again, getting to a peaceful resolution,’ she said of the aspiring authoritarian leader.

Ortagus said, ‘We always continue on Libya to urge all parties to work towards a peaceful solution and continue to work through the UN through that political process as we are supporting it.’

GOP Sen. Lindsey Graham has urged the sitting president, with whom he is close, to run point on the political reconciliation process.

‘It is important the United States reinforce its commitment to a political solution in Libya and reject efforts by any party for a military takeover. The administration, in my view, needs to reaffirm past statements rejecting a military solution in Libya and pushing for political reconciliation,’ Graham said in an end of April statement after a call with Sarraj, the Libyan prime minister.

The Republican senator said, ‘There will never be a military only solution in Libya, and the United States needs to lead the effort to bring about reconciliation between the recognized government of Libya and all factions on the ground.

‘I very much appreciate the efforts to eradicate ISIS and other terrorist groups from Libya and strongly believe that if civil war spreads, terrorist groups will fill the vacuum,’ he said. ‘It is now time for the United States to lead the political reconciliation.’