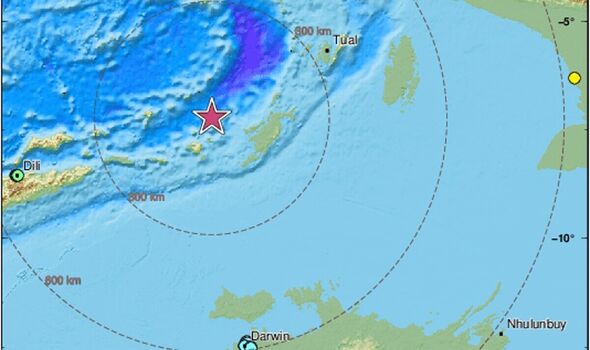 Tsunami warnings have been issued in Indonesia following a major earthquake in the Banda Sea which could be felt as far as Australia.

The magnitude 7.9 earthquake, which struck at 0.47am Tuesday morning local time (around 5.47pm UK time) has led to seismologists issuing evacuation warnings.

Centred in the Banda Sea, the quake occurred about 368 kilometers (229 miles) northeast of the small Asian country of East Timor, but shaking could be felt as far as the city of Darwin in Australia, according to local residents.

Indonesia’s seismological agency BMKG put the preliminary magnitude at 7.9, while the U.S. Geological Survey (USGS) put it lower, at 7.6. It struck about 95 kilometers below the seabed, which is relatively deep.

Details of damage or casualties caused by the quake is not yet known.

BMKG have issued warnings of a tsunami for nearby islands, urging residents to move to higher ground. Other countries in the region have not issued a tsunami warning.

The Joint Australian Tsunami Warning Centre said in a statement: “There is no tsunami threat to the Australian mainland, islands or territories”.

The earthquake comes just a day after the US issued a tsunami warning for Vanuatu following a 7.2 magnitude earthquake in the South Pacific Ocean. Later updates predicted that waves of between 0.3 and 1 metres would hit some coasts of the country.

Indonesia and Vanuatu are on what has been named the ‘Pacific Ring of Fire’, an arc of fault lines circling the Pacific Basin prone to frequent and large earthquakes.

In 2004, a 9.1 magnitude earthquake struck near Sumatra’s west coast in December 2004, causing an enormous tsunami which swept countries across the Pacific, killing at least 227,898 people.

It was one of the most powerful earthquakes ever recorded.

We’ll be bringing you the very latest updates, pictures and video on this breaking news story.

For the latest news and breaking news visit: /news

Stay up to date with all the big headlines, pictures, analysis, opinion and video on the stories that matter to you.

Follow our social media accounts here on facebook.com/DailyExpress and @Daily_Express