Two brothers are both jailed for seven years for keeping women as ‘slaves’ to run their £1,000-a-day drug-dealing racket from vulnerable victim’s home

Two evil brothers who made £1,000 a day using women as ‘slaves’ in a drug trafficking racket from a vulnerable victim’s home have each been jailed for more than seven years.

Smirking Sulman Khan, 26, and 24-year old sibling Zafran set up base in one woman’s house after exploiting her mental health difficulties to ply her with free crack cocaine.

The victim, 47, known as Shelley tried to get herself free from the brothers but was warned she, her pets and her family would be harmed if she failed to cooperate – and was told: ‘We control you.’

Two other women including Sulman’s girlfriend were also forced to help cook and pack drugs for the gang and act as his chauffeur. The Khans were arrested last June after a raid on their homes following a police operation into their activities.

It emerged the pair had a run a drugs hotline in Rochdale, Greater Manchester which fielded a daily average of 223 calls or text messages over one eight day period and Sulman boasted of having access to machine guns.

Both siblings were on licence having been freed from prison early last year over previous jail terms for drug dealing.

At Minshull Street Crown Court, Manchester, Zafran, from Rochdale and Sulman of Oldham admitted being concerned in the supply of cocaine between August last year and June this year. Each were jailed for seven and a half years. 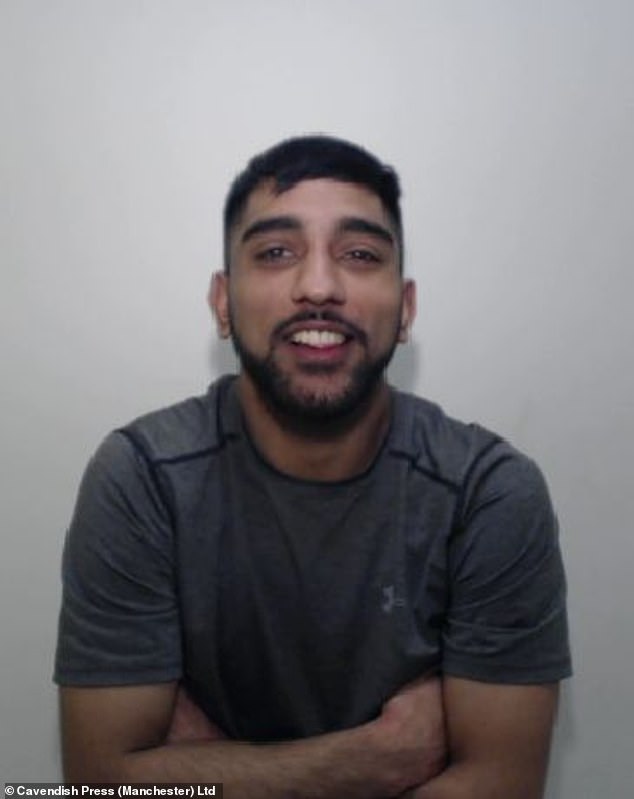 Smirking Sulman Khan, pictured, boasted of having access to machine guns during the drug-dealing operation

The pair are thought to have been out of prison for just a few weeks when resuming their drug dealing activities. Sulman was in charge of the packing of the drugs whilst Zafran would usually collect the narcotics from his older brother for onward supply on the streets.

Sulman recruited two teenagers aged 18 and 19 who would help him with the packaging, drive him around and alert him to the presence of police. They would also deliver dirty money from drug sales and bags for drugs.

Eventually Sulman and Zafran began moving their operation into the home of Shelley who lives in Syke near Rochdale in a criminal process known as ‘Cuckoo-ing.’

Jon Close prosecuting said Shelley who had a history of drug misuse was given free cocaine then given further complimentary samples on a regular basis on condition the Khan’s drugs operation was based at her home.

The brothers then ‘systematically took over her address’ and even obtained their own door keys for the house.

Mr Close added: ‘Sulman brought crack cocaine to her home, would store drugs paraphernalia in her wardrobe and cook and bag up drugs in her kitchen. Once the drugs were bagged up up, Zafran would collect them.

‘Both brothers would let themselves into Shelley’s home and do this three or four times a week with the amount of drugs being prepared increasing in size as time went on.’

Shelley tried to get rid the dealers by offering them money and her bank card but they refused saying: ‘We don’t want your money – we want to control you.’ They also threatened to damage her home, harm her dogs and made threatens towards her father and daughter.

Officers spotted Zaran driving his VW Gold in the area but had tried to give chase but he managed to shake them off. He and his brother were detained two days later at their respective homes and both gave no comment interviews.

Police recovered a mobile phone from Sulman’s girlfriend Dana Pickering-Raczycki then 19 and found 2,000 messages on it relating to her contact with him. 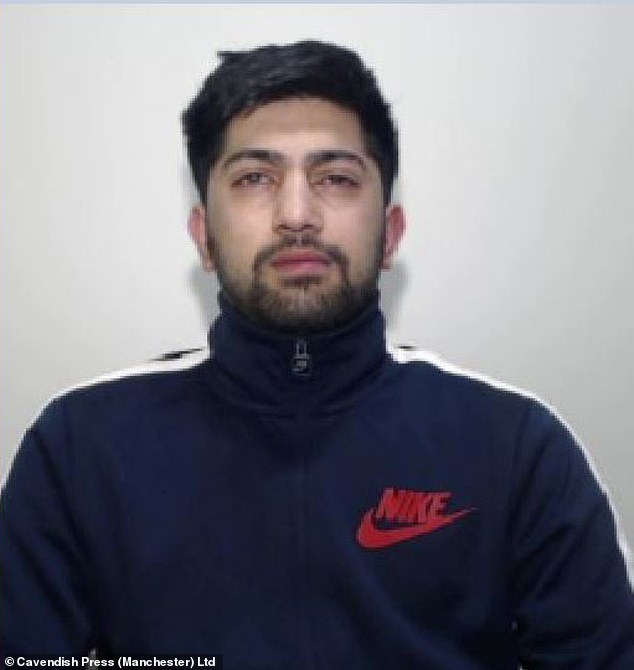 Zafran Khan, pictured, and his brother warned a vulnerable victim that she, her pets and her family would be harmed if she failed to cooperate – telling her: ‘We control you’

In various messages she said she did not want ‘anything to do with his dirty money’ but he called ‘paranoid’ and a ‘grass’ and said he access to a machine gun.

The court heard in April 2018 Sulman had been jailed for three years for supplying heroin and cocaine whilst Zafran had been given 32 months for being concerned in drug supply. Both had other previous convictions including dishonesty and perverting justice.

Sentencing Judge John Potter told them: ‘Cuckooing required the remorseless exploitation of Shelley who had mental health difficulties and who was a drug user. You told her she need not pay for those drugs providing she allow you to control and organise your drug dealing activities from her address. You thus exerted control over her life, exploiting her and her home for your own selfish gain.

‘Crack cocaine was brought to the house three to four time a week whilst scales bags and other items were stored at the property and the drugs would be bagged up in the kitchen ready for delivery.

‘Control was maintained over Shelley by various means including the acquisition of her bank card, threats being made to harm her and her pets, damage to he property and implied threats to safety of her extended family.

‘This was a sophisticated drug dealing operation which was no doubt designed to generated very significant profits running into many thousands of pounds. I accept there is no evidence as to lifestyle offending however both of you must have had expectation of substantial financial gain.

‘This trade is one in which both of you are most familiar. You are professional drug dealers peddling harmful substances in your community which results in misery and chaos not only for those who use drugs but also for those from whom they steal to buy drugs.

‘Your actions, gentlemen, are inspired by greed, selfishness and a ruthless willingness to exploit others.’

Pickering-Raczycki, now 20, of Wardle, near Rochdale admitted participating in a criminal enterprise and was was given 12 months jail suspended for two years. She was also ordered to complete 150 hours unpaid work and abide by a 9pm to 7am curfew.