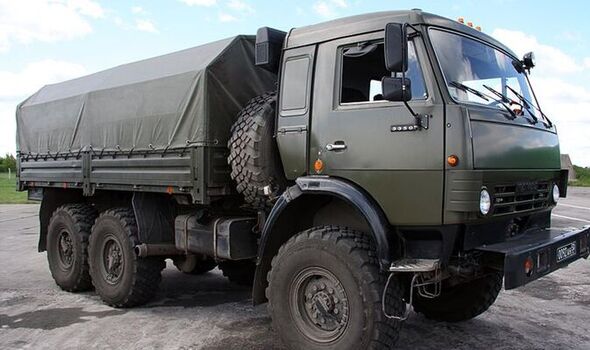 A contract worker reportedly smashed into a column of 20 Russian conscripts while driving a massive military KAMAZ truck.

The incident left two dead, one of them dying on the spot, the other dying in hospital, according to the Russian Telegram channel Baza.

Meanwhile 11 other soldiers were left injured.

The horrific crash allegedly occurred in a training camp in Arkhangelsk, a region north of Moscow.

According to Baza, Russian authorities are now investigating the incident. This has also been reported by Russian news outlet 29.ru.

The news outlet also claims that the driver of the vehicle was a 22-year-old.

The military prosecutor’s office of the Mirny garrison told 29.ru that they did not give any comments.

The cause of the chaos is not yet known.

Shortly after the dictator announced his intention to mobilise hundreds of thousnds more men to fight in Ukraine, a young man reportedly shot a Russian military officer at close range at an enlistment office.

According to local media, 25-year-old resident Ruslan Zinin walked into the enlistment office saying “no one will go to fight” and “we will all go home now” in the Siberian city of Ust-Ilimsk on September 26.

The military commander was placed under intensive care, while the attacker was arrested.

Meanwhile, protests also flared up in Dagestan, one of Russia’s poorer regions in the North Caucasus, according to AP. Local media reported that “several hundred” demonstrators took to the streets on September 27 in its capital, Makhachkala.

The men killed 11 and wounded 15 before they were killed themselves.

The ministry said in a statement that the shooting took place in the Belgorod region in southwestern Russia that borders Ukraine. It said two men from an unnamed former Soviet republic fired on volunteer soldiers during target practice and were killed by return fire.