Two men were caught on camera about to pop bottles of Prosecco outside Buckingham Palace in an apparent effort to celebrate the death of Prince Philip.

Her Majesty announced the Duke of Edinburgh’s death at midday as the Union Flag was lowered to half-mast outside the royal residence in London.

Philip had spent his final days at Windsor Castle with his wife after a 28-night stay in hospital having been admitted in mid-February for an infection and a pre-existing heart condition.

Members of the public had gathered earlier today to pay their respects but were shocked to see the unnamed duo brazenly celebrating the Duke’s death.

In one clip, shared to Twitter by YouTuber Mahyar Tousi, the two men could be seen straddling their bicycles and hovering outside the gates of Buckingham Palace with bottles of Prosecco in hand.

One then poses for photographs as his companion takes snapshots on his phone.

Mr Tousi uploaded his clip to Twitter alongside a caption that read: ‘A couple of attention seekers with bottles of champagne being disrespectful outside Buckingham Palace.’

And other social media users flooded to condemn their actions. 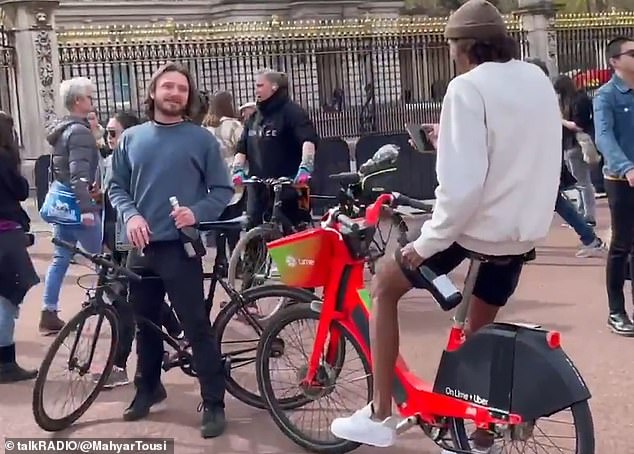 One wrote: ‘Wow vile… not a royalist or a lover of Prince Phillip but this is just wrong so disrespectful… what a sad world this is turning into.’

Another added: ‘Let’s get those flags on every building we can and fly half mast for [Prince Philip].

‘He earned respect not like these two idiots with a cheap shot. They could learn a thing or two from HRH.’

And a third simply commented: ‘Disgraceful.’ 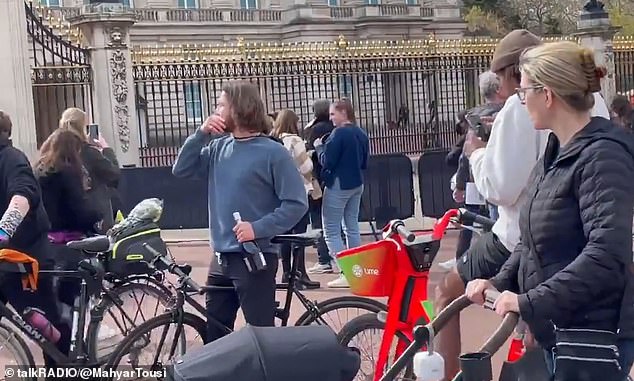 Philip, who was the longest serving consort in British history, spent his final days at the family’s Berkshire home with the Queen after a 28-night stay in hospital for an infection and a pre-existing heart condition.

There has been a huge outpouring of grief today as thousands of tributes were shared online with heartfelt words for The Queen – who was described by one well-wisher as having ‘lost the brightest jewel in her crown’.

Crowds gathered to place flowers in front of palace gates including Buckingham, Windsor and Balmoral, where notices shared the news of the Duke’s passing.

But officers on horseback have since arrived at Buckingham Palace to break-up crowds who had gathered with police on foot also seen marshalling the large numbers that had gathered.

Palace officials and No10 have encouraged the public not to congregate in large groups amid coronavirus restrictions as mounted police asked people to obey social-distancing measures.

A Cabinet Office spokesperson told MailOnline, said: ‘The sad death of HRH The Duke of Edinburgh has been announced by Buckingham Palace.

‘Although this is an extraordinarily difficult time for many, we are asking the public not to gather at Royal Residences, and continue to follow public health advice particularly on avoiding meeting in large groups and on minimising travel.

‘We are supporting the Royal Household in asking that floral tributes should not be laid at Royal Residences at this time.’