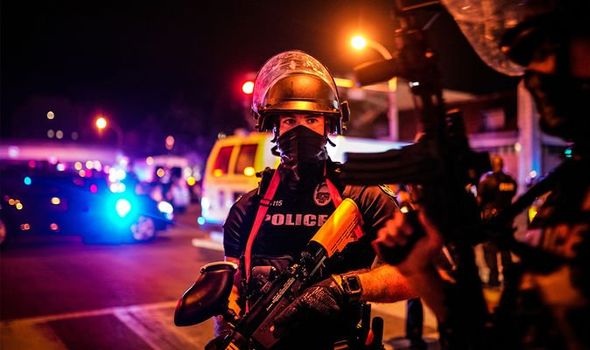 Video from the scene shows police being attacked with fireworks before numerous gunshots are heard.

Both victims have been taken to hospital are are “alert” according to local media.

A suspect is reported to be in custody.

Louisville Metro Police Department said the attack took place at Brook Street and Broadway at about 8:30pm EDT (1.30am BST).

The protest began after it was announced no police officers will face charges related to the fatal shooting of Breonna Taylor in March.

Earlier demonstrators lit a number of small fires and attacked police with bottles and other projectiles.

Large protests against the decision are also taking place in cities across the US including New York, Washington D.C. and Austin.

Video posted on social media showed a restaurant in Washington D.C. having its windows smashed by demonstrators.