A council has been accused of wasting time and resources after two workmen spent an autumnal afternoon blowing away fallen leaves – in a wood.

A dog walker stumbled upon the bizarre scene of men, believed to be a Bournemouth, Christchurch and Poole Council staff member, using leaf blowers to clear a woodland walkway that is surrounded by tree canopy.

The ‘pointless’ task was likened to painting the Forth Bridge, as the job of clearing leaves from a forest floor at this time of year is almost never-ending.

The leaf clearing was filmed by the dog walker, who captured one of the workers carrying out the bizarre task, in Branksome Park Wood in Poole, Dorset, which has a well-trodden pathway running through the middle of it. 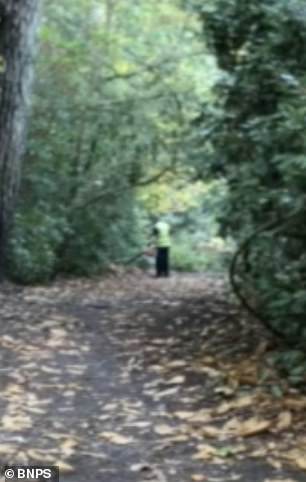 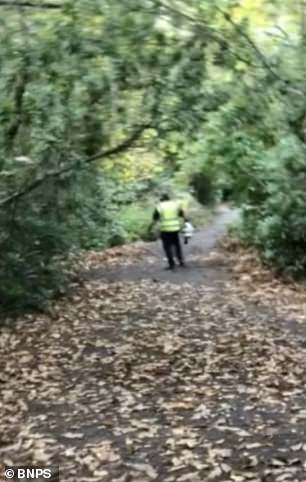 A dog walker who did not wish to be identified, filmed men believed to be Bournemouth, Christchurch and Poole Council staff members, blowing leaves from a pathway which is covered by a tree canopy

People posting on social media described video of the work as ‘pure insanity’ and ‘madness.’

A council employee also commented and seemed to suggest the leaves were cleared away in case they got wet and slippery and became unsafe.

The female dog walker, who asked not to be named, claimed that pavements close to the wooded area were covered in leaves and it made more sense to clear those.

Ironically, she had decided to take her dog out for a walk to get away from a neighbour using a loud leaf blower while she was working from home.

She said: ‘I went out for a walk because my neighbour started using a leaf blower and I was trying to work.

‘As I walked through the woodland the peace was broken by the familiar noise of another leaf blower. I couldn’t believe when I saw it was a council worker blowing the pathway clear of leaves.

‘I was inclined to say to him isn’t this really pointless?

‘It is a very well kept area of woodland and I know the council is very proud of it, but this seemed like a big waste of time and a council resource to me. 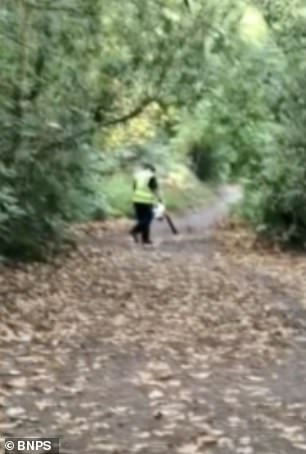 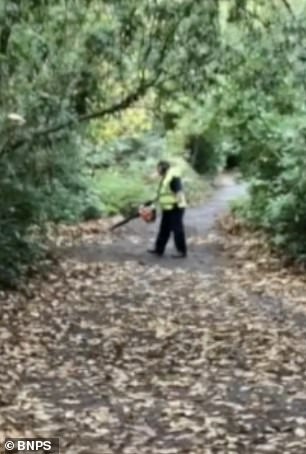 The video was shared on social media and people were quick to question why the task was being carried out, with the weather likely to bring the leaves tumbling down again

‘There is tree canopy all along that route so is there really any point in clearing the leaves in a woodland environment in the autumn?’

Beverley Wright posted on social media: ‘Totally ridiculous but no doubt BCP (council) covering their backsides should someone slip on a public byway and decide to sue.’

Nina Manning posted: ‘The leaves are the very essence of Autumn. He’s removing the essence.’