Home » World News » UK could miss out on 3.5m doses between now and February

UK could miss out on 3.5m doses between now and February

What would happen if the EU forced Pfizer to stop delivering Covid vaccines? UK could miss out on 3.5m doses between now and February and rely totally on AstraZeneca’s plan to hit 2m per week by Monday

The UK could miss out on millions of doses of the coronavirus vaccine if the European Union suspends deliveries to countries outside the bloc.

Britain is expecting to receive another 9million doses by mid-February from Oxford/AstraZeneca and Pfizer/BioNTech.

But if Eurocrats blockade jab exports across the channel, American drugs company Pfizer – which manufactures vaccines in Puurs, Belgium – will be unable to ship supplies.

As many as 3.5million doses of their jab are expected to arrive over the next three weeks, reports the Telegraph, a shipment that wouldn’t land on British soil if Brussels chose to redirect supplies.

The move would not, however, cut supplies of the AstraZeneca vaccine because the ‘vast, vast majority’ of their jabs are made in the UK.

There are fears that any cut in deliveries could leave the Government unable to meet its target of vaccinating 15million of the most vulnerable by mid-February.

But it is not clear how many doses are already sitting in warehouses in the UK, which ministers say they won’t reveal because of ‘security concerns’.

The UK has already vaccinated more than six million of the most vulnerable against the virus, as it steams towards its target of 15million by mid-February. 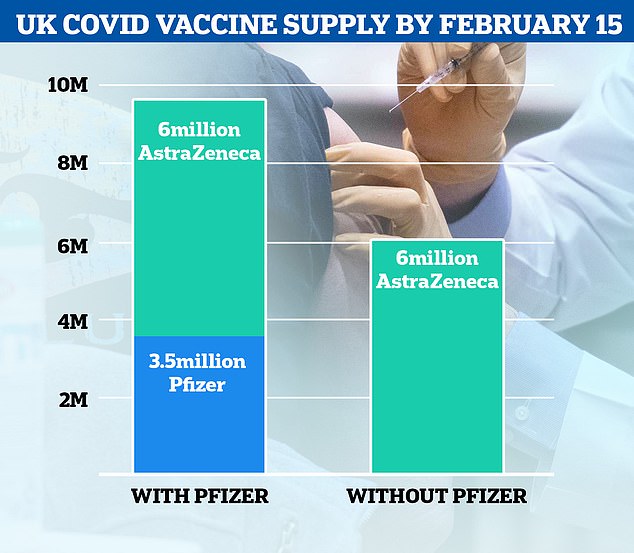