Rise in Brits dropping out the workforce puts UK behind only Colombia, Chile and Switzerland in global league table of economic inactivity

Britain has experienced the fourth-highest increase in economic inactivity since the start of the Covid pandemic out of the world’s top economies, new data has shown.

A study by the Office for National Statistics revealed only Colombia, Chile and Switzerland had seen a larger increase in their rates of economic inactivity since the end of 2019.

The UK is also one of only seven countries to still have a higher inactivity rate than before the Coronavirus crisis out of 37 OECD nations.

There are 565,000 more Britons who are economically inactive – those who are not working but also not actively seeking a job – than before the Covid pandemic.

Most are to be found among the over-50s and those who have become long-term sick.

The ONS study found there was an increase in inactivity rates for all 37 advanced OECD economies at the beginning of the Covid crisis.

But only around a fifth of these countries still have a higher inactivity rate when compared to before the pandemic, including Britain.

It has meant the UK is one of only four OECD countries where a fall in the employment rate relative to pre-Covid is driven by a rise in the rate of economic inactivity rather than an increase in unemployment, the ONS said. 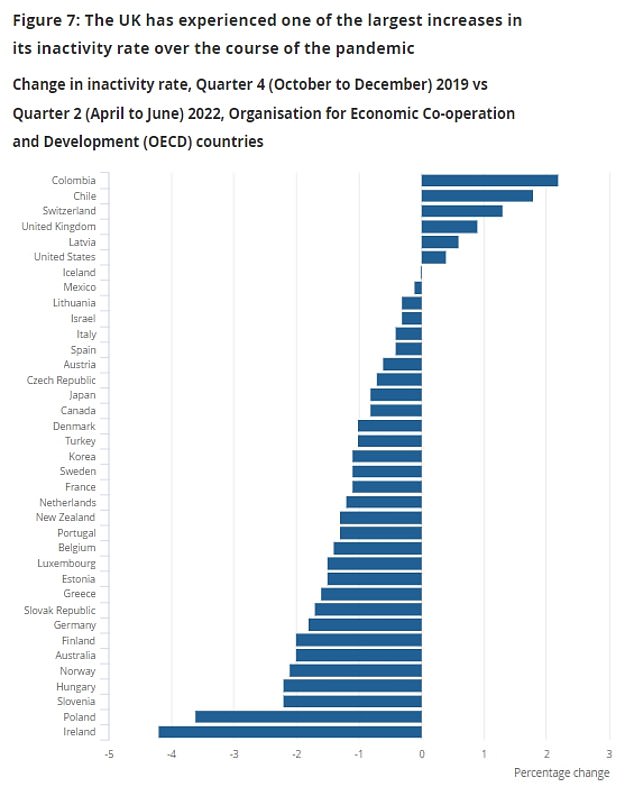 A study by the Office for National Statistics revealed only Colombia, Chile and Switzerland had seen a larger increase in their rates of economic inactivity than the UK since the end of 2019 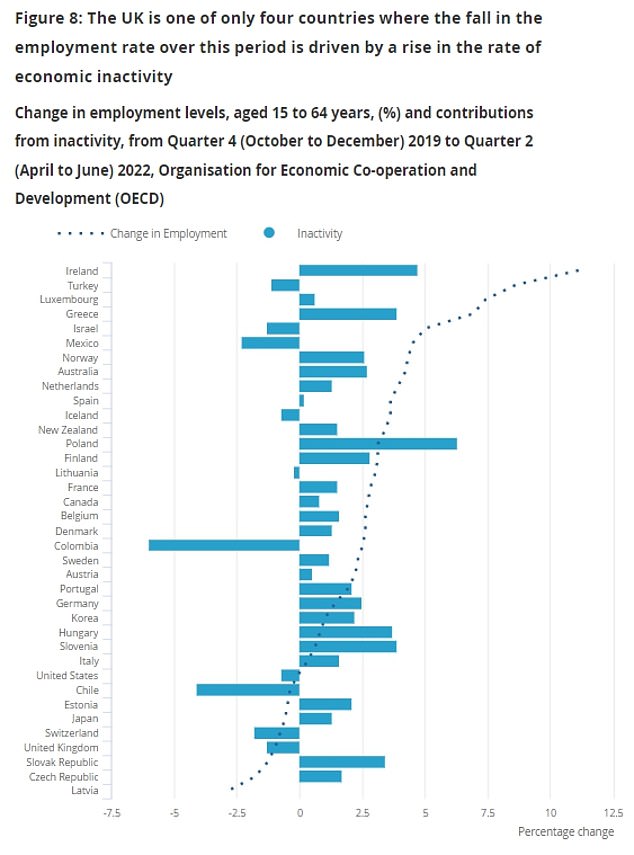 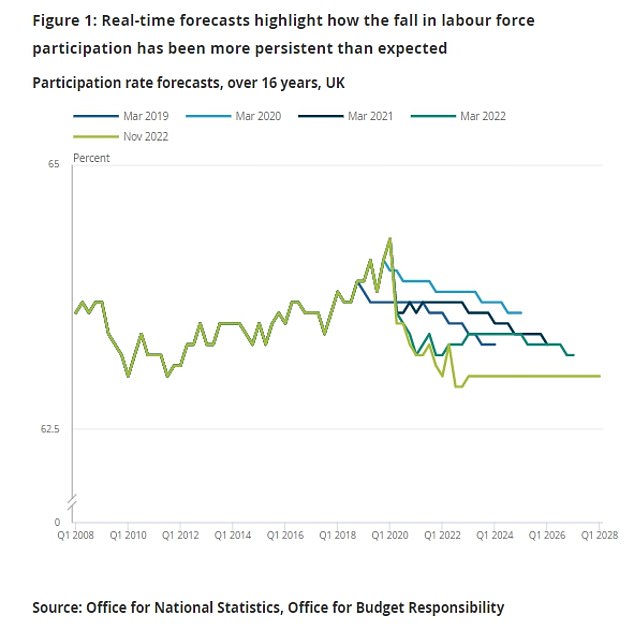 In their assessment of the ‘participation puzzle’ of Britain’s labour market, it was found that the increase in economic inactivity had been the fastest on record but also lasted longer than expected.

The ONS said: ‘The UK is one of the few advanced economies that is still experiencing this “participation puzzle”, which might be indicative of health concerns of workers having more of an impact on labour force participation in the UK.’

A higher prevalence of long-term sickness was found to be the main reason for inactivity.

The ONS has previously found that while an increase in long-term sickness had taken place before Covid, it has picked up more quickly following the pandemic.

There has been a higher incidence of other health problems, which would cover similar conditions to long COVID and mental illness, over this period.

The ONS also found some evidence the pandemic has had an impact on how likely an older person is to become inactive, particularly those aged 65 and over.

There was an increase in inactivity rates for all 37 OECD countries as lockdown restrictions were imposed across the world in 2020.

But the ONS found the persistence of this impact on economic inactivity has not been the same for all nations, with the vast majority now having a lower inactivity rate compared to before Covid.

‘The evidence so far implies that some of the behavioural changes of workers in their ability and willingness to work have been more specific to the UK,’ the ONS study added.

‘The challenge of a lower active population would not appear to be a global phenomenon, highlighting that the UK may have specific challenges if these inactive workers do not return to the labour force.

‘There are still uncertainties as to whether this effect on participation will be a permanent feature of the pandemic, though this UK participation puzzle remains a challenge for policymakers.’