BBC Weather: Temperatures set to rise in parts of the UK

The latest heat maps from Netweather show temperatures soaring to 23C in Kent and London in the south-east on Tuesday, July 13. Surrounding areas including Hertfordshire and Essex, along with Leeds and Bradford in Yorkshire, could also bask in 22C on the same day. Temperatures could get even hotter a day later on Wednesday, July 14, as Essex and Kent see 24C.

Netweather’s long-range forecast added the heat could stick around as high pressure sends a fresh bout of hot air from North Africa into the UK between Monday, July 19, and Tuesday, July 27.

The forecast said: “The signal for high pressure reduces during this period, suggesting that the weather may turn more unsettled again from the west, especially towards the end of the period.

“There is potential for some notable heat during this week, as temperatures have been building over North Africa and Spain and Portugal, and as the fine weather breaks down we may tap into some of this hot air, though confidence at this range is relatively low.

“There is thus quite high confidence in above- average temperatures during this week, most likely by around 2C. 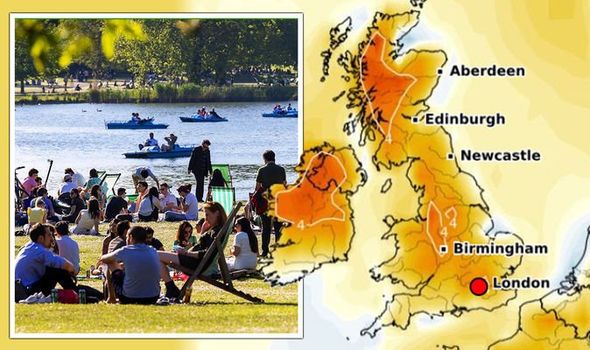 “Confidence in sunshine and rainfall amounts is somewhat lower, but it is most likely to be drier than average in the north and east of Scotland, with above average rainfall most likely to affect the south of England.”

The BBC also predicted hotter temperatures to bring a heatwave by the end of July.

The long-range forecast between Monday, July 12, and Sunday, July 25, said: “From the middle of July onwards, we should have less frequent rain with dry spells and slightly higher temperatures.

“Firstly, it is not out of the question that unsettled westerly flows could develop more widely and bring more frequent rain to more areas. 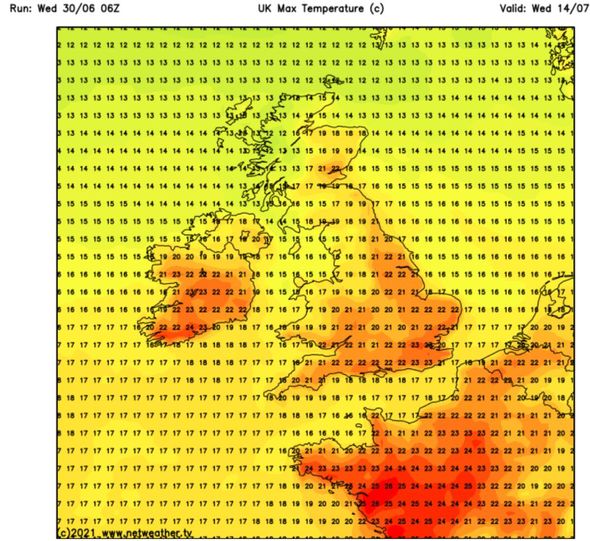 “However, the greater possibility is contrary to that: high pressure could build more strongly in the vicinity of the British Isles and produce drier and warmer conditions rather widely.

“There are certainly some computer model evolutions that suggest this is possible but there are in a minority at the moment, and it is about a 30 percent chance.

“Indeed, models have been keen on building quite strong high pressure over and around Scandinavia through the middle of July, which would be a very warm pattern with chances of heatwaves developing.”

And the Met Office predicted “prolonged sunshine” and “hot spells” to bake many regions towards the end of the month. 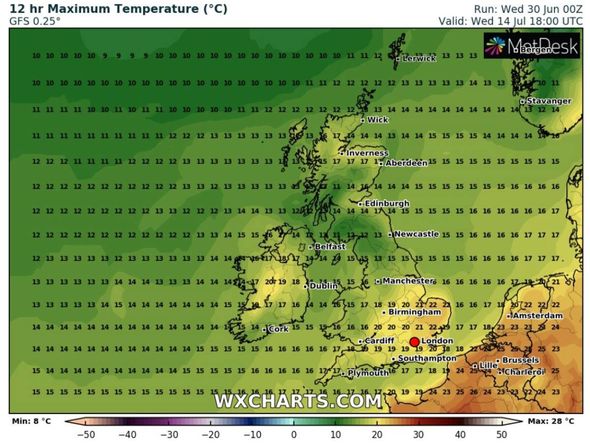 The forecast between Tuesday, July 13, and Wednesday, July 28, said: “Temperatures generally rather warm or locally very warm in the sunniest areas.

“Through the new week, sunny spells and showers, or perhaps longer spells of rain are most likely across the southern half of the UK, with northern and eastern areas likely to experience the best of any fine and dry weather.

“Temperatures are most likely to be above normal, notably in any prolonged sunshine across parts of the northeast.

“Winds will at times be strong, with coastal gales in the west and northwest.” 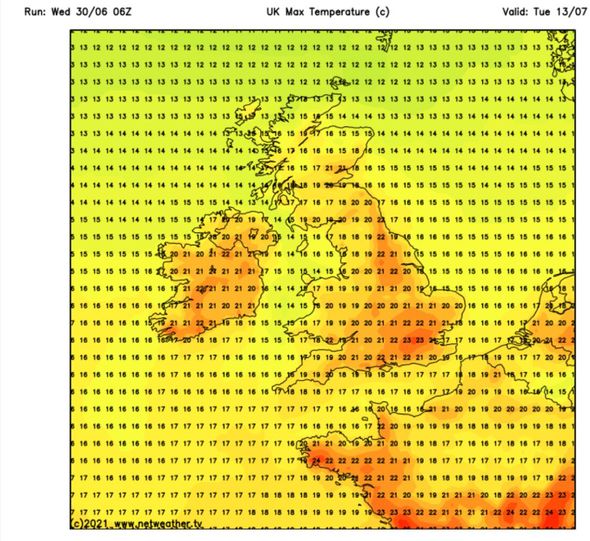 Before all that, July looks likely to start on an unsettled note, as Friday sees highs of 25C hit London.

But the warm start is predicted to be cut short as hail and thunderstorms quickly arrive.

Nick Finnis at Netweather said: “Friday sees high pressure builds in across the UK, so there should be sunshine for most, even in the east of England – where it’s been cloudy most the week.

“Cloud will build through the day – which may bring some well-scattered showers across England and Wales in the afternoon, but most will probably escape them. 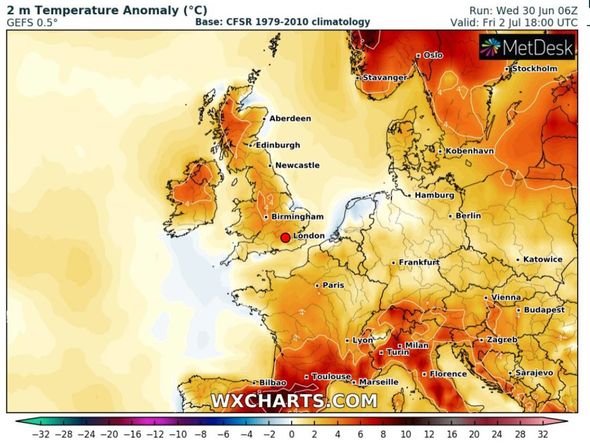 “High pressure doesn’t last for long before low pressure nudges in from the Atlantic on Saturday, so the weather turning increasingly unsettled from the southwest over the weekend.

“Troughs and a cold front moving northeast across England, Wales and Ireland on Saturday ahead of low pressure west of Ireland will introduce showers to many parts through the day, some of which will be heavy with hail and thunder.