New weather charts show huge swathes of the UK in line for snowfall this weekend as a wall of freezing weather slams into the country from the east – and the wintry conditions look set to stay for at least seven days. Scotland will have already have seen the first snowfall from early this morning, but as the day progresses approaches the weather front will start to move further south with up to 18inches (45cm) forecast in parts of England.

Snowfall is expected to become more widespread from Saturday evening, particularly affecting the east of the UK.

According to Netweather’s snow risk chart, parts of Scotland and the north east of England have a 100 percent risk of snow at 6pm on Saturday, with parts of Wales, East Anglia and the south east showing a moderate risk of between 40-85 percent.

The snow risk gradually increases overnight and through Sunday morning, until much of the UK is covered in a 100 percent snow risk.

The weather chart shows huge swathes of the UK turn white and red, indicating a very high risk of blizzards.

Snow depth maps by WXCharts show parts of England can expect up to 5.5 inches (14cm) by 6pm on Sunday, with Norwich and Yorkshire seeing the worst of the snow. 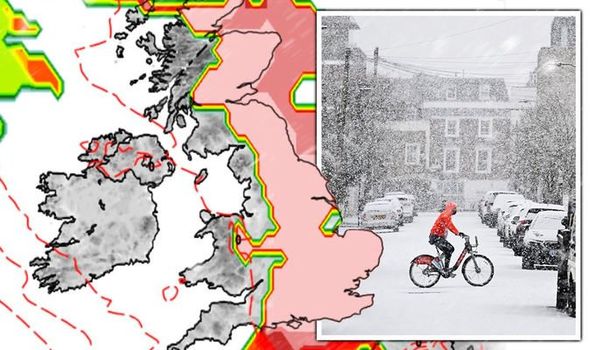 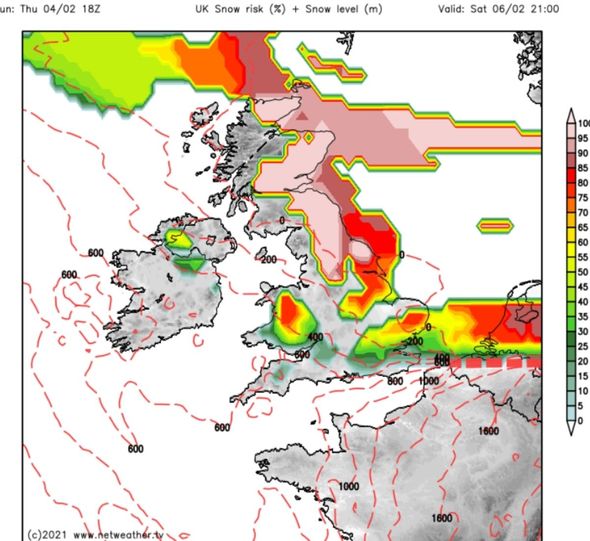 Parts of the south east, including London, can expect just over an inch of snow.

Weather charts show the weather front continues to batter the east coast through Monday, with snowfall expected across much of the UK.

The wintry conditions will continue through Tuesday and Wednesday, prompting snow to build up over several days.

By 6am on Thursday morning, parts of Yorkshire can expect up to 18inches (45cm).

The south east and London can expect between 1-8cm.

JUST IN: Snow radar: Where will snow fall this week? 5 days of snowfall – maps 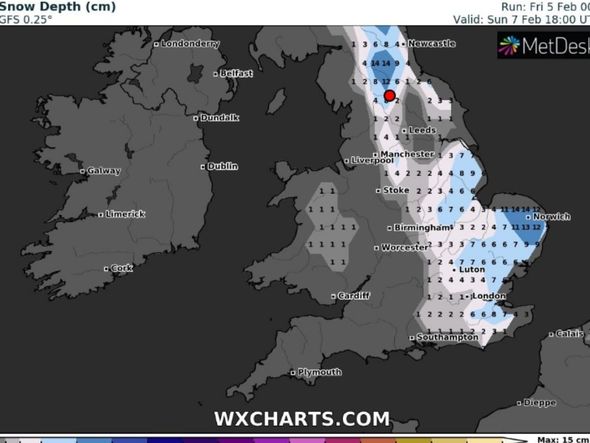 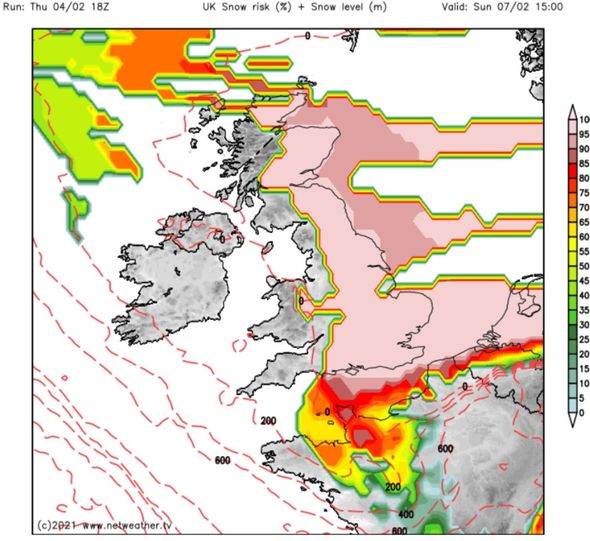 By Thursday, the west of the UK and the Midlands look set for some snowfall, with a weather map showing a high likelihood of snow at 9am.

The wintry conditions look set to ease by Friday afternoon, with just a sprinkling of snow forecast in the Scottish highlands by 9pm.

Jim Dale, Senior Meteorological Consultant at British Weather Services, told Express.co.uk the wintry conditions will be caused by the so-called “Beast from the East”.

He told this website: “Its ‘breath’ will be felt tomorrow as a chilly east to northeast wind picks up and brings a flavour of what to expect. 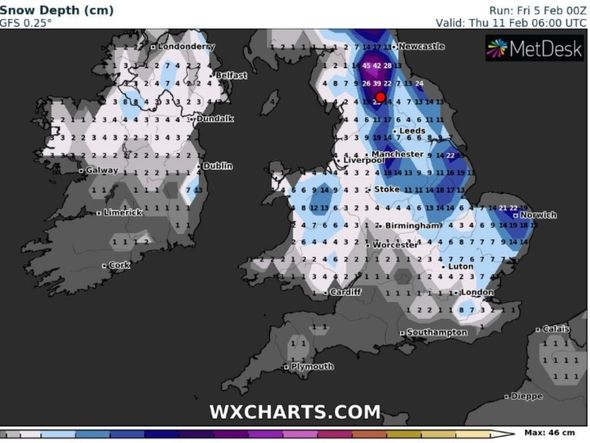 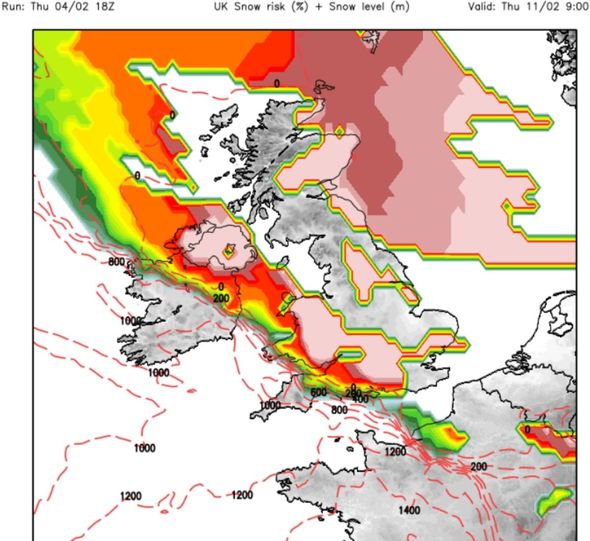 “The snow fest over the Grampians and Highlands will continue – dangerously huge volumes here, but it isn’t until Saturday night into and through Sunday that the snow begins to impact all eastern counties of Scotland and England in the form of showers off the North Sea, brought in by that strong icy wind.

“It’s a similar picture for Monday with the snow showers edging further east into central areas, but with the east still taking the lion’s share.

“By Tuesday a more concerted spell of snow is due to impact SE England including London, where several cm could fall and by now large swathes of the country will be snow-covered, though western areas will tend to see sparser falls.

“The freezer conditions with further snow showers are set to last the week, slowly easing off with time but by day many places will not see temps above freezing with circa -15 deg. C. in the glens of Scotland the likely low point; more sanely most of us will see minimum temps ranging between freezing and -7 deg. C.” 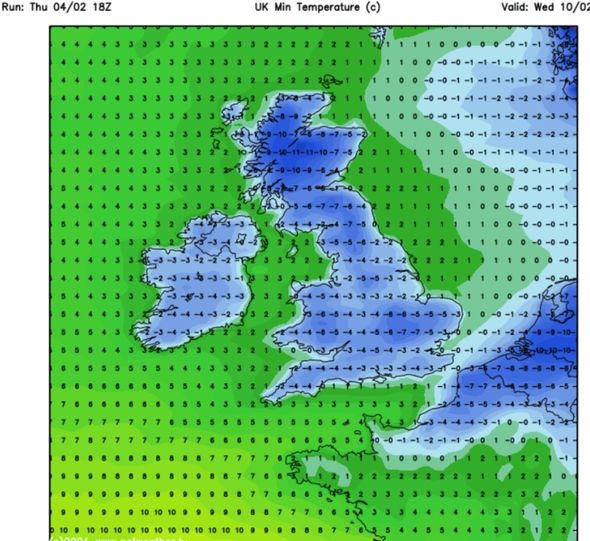 Temperature charts by Netweather show the mercury is set to plunge from Sunday, with particularly icy conditions forecast for midweek.

The Met Office have forecast snow across the east coast from Sunday.

They said: “Following a spell of snow in the southeast on Sunday, further snow showers are expected next week, most frequent in the east.”

The forecasts have issued a yellow weather warning for snow and ice from 12pm Saturday to midnight on Sunday, which covers the whole of the east coast of the UK.

A separate weather warning has been issued for the east of the UK covering the whole of Monday.