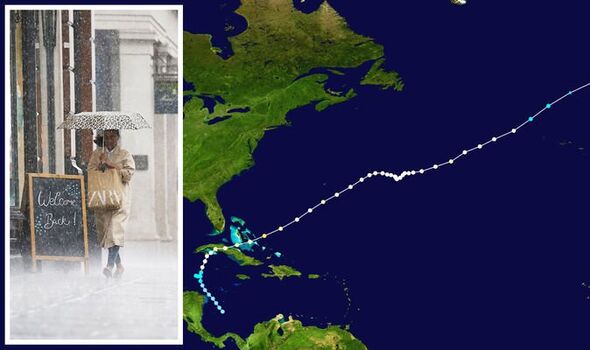 Government forecasters have warned the next six months will see an above-average tropical cyclone activity. It predicts that from June, 18 named tropical storms, nine hurricanes and four major hurricanes will hit the North Atlantic basin.

While hurricanes never affect the UK, their remnants frequently sweep in on the jet stream bringing periods of stormy weather, and sometimes named storms.

“However, there is a signal in our forecast for heightened activity this season to be biased towards the western side of the basin.”

Hurricanes usually unleash most of their damaging energy across Central and Northern America.

But they can often make a hairpin turn and veer eastwards towards the UK, almost always helped along by the jet stream.

This was the case with the devastating St Jude Day storm which struck in October 2013 and killed at least 17 people.

The storm, which started as an extratropical cyclone in the central Atlantic and was whipped into Britain by the jet stream.

Ex-hurricane Ophelia drove winds of 90mph across the UK in October 2017 and brought a poignant reminder of the danger of ‘hurricanes’ arriving almost 30 years to the day after the Great Storm of 1987.

In a typical Atlantic-storm pattern, Ophelia formed south-west of the Atlantic Azores Islands, but instead of first scouring the United States it headed straight for Europe.

Remains of tropical hurricanes sometimes bring the reverse of trouble when they reach British shores.

They can waft blasts of warm air across our shores, or by drawing up high pressure, as with Hurricane Cristobal in August 2014, plunge the UK into a late summer snap.

Jim Dale, meteorologist for British Weather Services, said: “It is the energy that these systems bring, if they do make their way towards the UK, that can have the knock on effect on our weather.

“Sometimes this can result in very unsettled conditions, as has been seen with some of the named storms we have seen during the UK storm season.

“Other times they can bring warm air up to the UK and we don’t see much of an effect other than that as they have blown themselves out by the time they get here.”

Instead of storms, the remnants of tropical cyclones could dish up a run of late summer heatwaves.

Mr Dale, author of Weather Or Not? said: “If these systems move northwards towards Scandinavia and the northern part of Scandinavia, they can draw high pressure over the UK.

“It is when this happens that we see some of the biggest heatwaves.

“Tropical hurricanes can affect the UK in various ways depending on how they behave.”

In the shorter term, Britons are warned to brace for possibly stormy weather to greet the Jubilee celebrations.

Mr Dale said: “It is still uncertain, but the models seem to be veering towards two days of unsettled weather which could bring the risk of heavy downpours and thunder.

“The latter part of the holiday looks better, with more of a chance of sunshine and lighter showers.

“Unfortunately, we are not talking about a wall-to-wall scorcher. It is not looking great.”