Home » World News » UK to be hammered by wildfires, storms and heatwaves in 2023

UK to be hammered by wildfires, storms and heatwaves in 2023 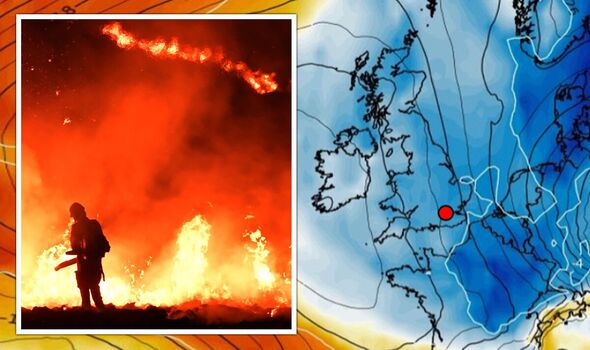 As the curtain falls on twelve months of record and near-record-breaking temperatures, dry spells, droughts and cold snaps, alarm bells have sounded for a 2023 repeat.

Meteorologists and organisations including the National Trust have warned further devastating weather events, not just across the globe, but in the UK, are all but certain.

Jim Dale, meteorologist for British Weather Services, said: “I believe that 2023 will be just as active as 2022, and what that means in terms of extreme weather for Britain over the next twelve months is that the game is back on.

“I do not expect this year to be any different from last year, which was an extraordinary year for weather events not just across the world, but here in the UK.

“This year may not be an exact carbon copy of the last, but all the ingredients are there.

An expert in climate and weather impacts, he warned Britain should be on alert for the storm season to start cranking up as soon as next month.

Last February the UK was hit by three horror tempests in a row, Dudley, Eunice and Franklin, with Storm Eunice packing the biggest punch as 80mph-plus winds lashed the nation wreaking widespread havoc.

Mr Dale, author of “Weather Or Not?”, said: “Last year there were three storms in very quick succession, and these developed under a strong jet stream.

“Once again, we have a very strong jet stream and there are signs that it could help to intensify low-pressure systems forming in the Atlantic.

“We are waiting again for that type of storm scenario to kick in, so we have to be on the lookout.”

It comes as fears build the UK may be facing another big freeze within weeks while Europe heads into a freak winter “heatwave”.

Some weather models point to temperatures plunging this month with a building risk of further heavy snow.

All eyes are on the atmosphere above the Arctic as weather models hint on a warming of the stratosphere­–a so-called Sudden Stratospheric Warming (SSW), similar to the driver of the 2018 Beast from the East.

Forecasters are furiously debating whether Britain will be plunged in the freezer or thrown to the mercy of storms.

Exacta Weather’s James Madden said: “There are still signs of an SSW event setting in during the start of January, and this raises the risk of a severe cold snap across the UK.

“This could pave the way for above-average snowfall and very low temperatures as we go into the new year.

“At first, this could be restricted to northern regions, but there is also a risk of seeing some snow further south and potentially to lower levels.”

In the shorter term, Britain is battening down the hatches for a wet, windy rand snowy run into 2023.

The Met Office has weather warnings in force across the north this morning as the region braces for up to four inches of snow.

Met Office meteorologist Marco Petagna said: “We hold on to very unsettled weather to see out the year, and this is all down to low pressure moving in from the southwest.

“The wintry conditions across the north gradually peter out during the day, whereas down to the south and the southwest it is a case of sunshine and showers, but those showers will be very blustery.”

It will be milder in the south, while Scotland and northern Britain hold on to colder temperatures, he added.

This week has seen experts warn that extreme weather events are likely to become a regular blight on the UK’s landscape.

The Met Office said 2022 is expected to be the UK’s warmest year on record, with average temperatures boosted by the record 40.3C summer heatwave.

Temperatures have rocketed across the Continent over the past week with experts warning of unprecedented winter heat.

British Weather Services’ Jim Dale, an expert in climate impact and severe weather events, said: “This is almost unheard of for the Continent at this time of year which could be looking at temperatures of 21C.

“These are the sorts of temperatures which will break records, and the far southeast of Britain could get a taste of this warmth through the next few days.”