After a turbulent return to cooler temperatures and heavy wind and rain this week, the heatwave will return in earnest – and by June 15 the chart depicts much of northern Europe in blood red. The most blistering heat will be found in the southwest of England, Wales and Northern Ireland but there is no part of the country that isn’t expected to be warmer than average. The coolest parts of the country appear to be the northeast of England and southern Scotland.

In the meantime, BBC Weather has forecast heavy and persistent rain across the country as a low-pressure weather system moves in from across the Atlantic.

Forecaster Carol Kirkwood said: “There will be some persistent and heavy rain on the way.

“Some of us will already be seeing that rain that has been courtesy of an area of low pressure from the southwest.

“So it is wet across parts of southwest England, Wales and Northern Ireland with that rain continuing to move northeastwards through today. 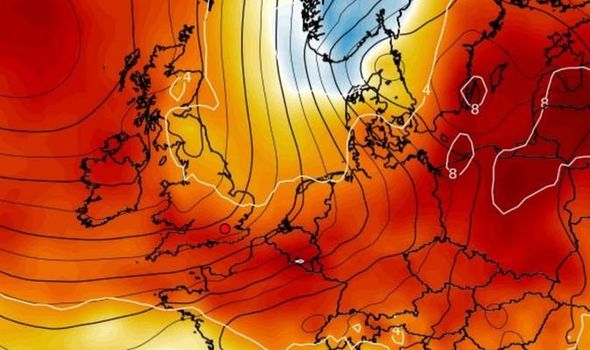 “You can see from the lack of isobars not as windy as yesterday except for across the far north of Scotland.

Ms Kirkwood closed by saying: “Through Tuesday evening into Wednesday our low pressure continues to drift northwards taking the rain with it.

“The centre of the low pressure is roughly in north England and as that passes we will see some clear skies developing so expect some mist and fog patches forming.”

Met Office Meteorologist Helen Roberts warned: “Low pressure and high temperatures across the near Continent will lead to some very unstable air will at times pushing either into the UK or at least very close to us, particularly across eastern parts of the country.

“There are three things going on which will affect our weather this week, the jet stream is very far to the north of the UK and allowing the unstable air up from the Continent and we have low pressure generally in charge.

“There will be some pretty heavy and thundery downpours at times through the week, and we are almost certainly going to issue a warning for rain.

“There could be a plume of warmer air associated with another low pressure system due to arrive on Friday, however temperatures will be subdued with the cloud cover, but it will be quite humid.”