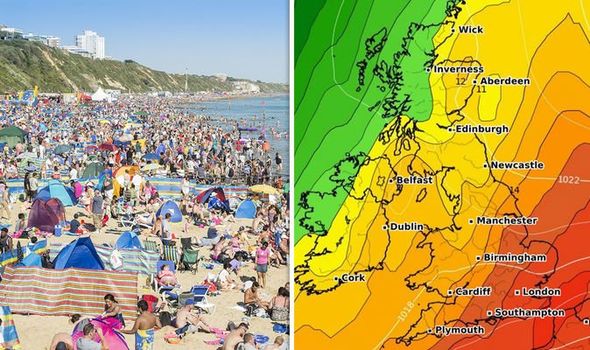 Sunday morning will be fairly wet across many northern and western areas of the UK. However, across eastern England there will be very warm sunshine. Heavy rain will push north across Scotland on Sunday morning but elsewhere it will be lighter and more patchy.

Met Office meteorologist Steven Keates said: “I think the heaviest of the overnight rain will have largely cleared away from Northern Ireland.

“But it’s a wet start to the morning across northwest England, west Wales and showery rain will be making in-roads into southwest England too.”

Elsewhere across England and Wales there will be largely clear skies while temperatures continue to soar into the early twenties by mid-morning.

A cold front will continue eastwards on Sunday and will cause a dividing line between brighter but fresher conditions in the west, and hot and humid weather in the east. 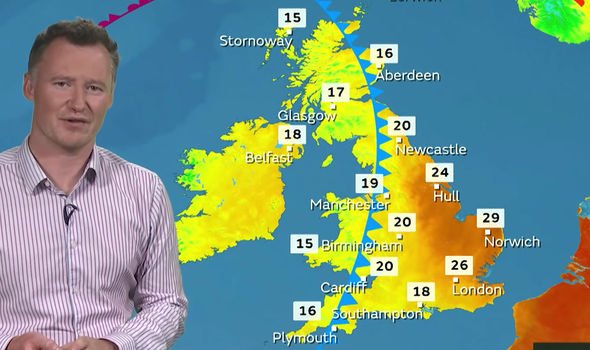 Along that line will be some heavy showers and potentially some thunderstorms across northeast England.

Mr Keates continued: “Temperatures in the west will be much fresher and much more comfortable with temperatures typically in the mid to high-teens.

“But the east of the weather front across eastern England in particular will see another hot afternoon on the cards.

“Somewhere in Norfolk could get close to 30C.” 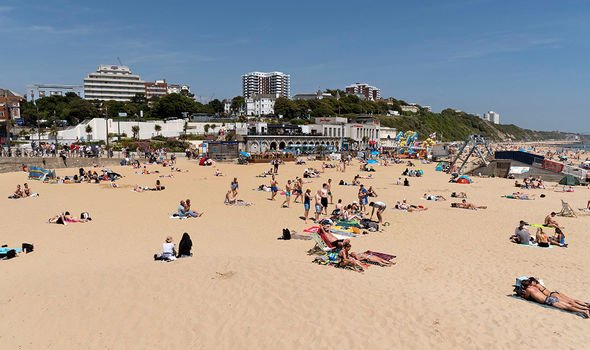 Sunday evening will see the cold front continue eastwards with the last of the thunder storms and rain clearing out into the North Sea.

There may be a few thundershowers close to the southeast of England.

Many central and western areas will end the day with sunshine.

However, a swirl of cloud close to Northern Ireland could bring some very strong winds to the coast which may spread to southwest Scotland on Sunday evening.